Microsoft announced Office 2016 in January and released the first preview for Windows back in March. While the test version of the productivity suite was free, this isn’t true for the final release: You either have to pay upfront or purchase an Office 365 subscription. That said, Microsoft is promising that subscribers can expect “more frequent updates with new features and improvements.”

As promised, Microsoft today also released a standalone Office 2016 for Mac one-time purchase option (the above prices apply to OS X users as well). Unlike the Mac version of Office, the Windows release requires that you uninstall any previous version of Office.

The new Office 2016 apps are available in 40 languages.

Office 2016 supports multi-touch input on touch-enabled devices, though all features and functionality are still available using a keyboard and mouse. While you can see above that Windows 7 is technically supported, touch features are optimized for use with Windows 8, Windows 8.1, and Windows 10.

In fact, Microsoft says that while Office is increasingly becoming more and more cross-platform, the team still considers Windows as the “home” for Office. As such, the company highlighted Windows Hello support, which lets you log into your PC and Office 365 with your finger, iris, or face. Typing a password is no longer required, assuming you have the proper hardware. 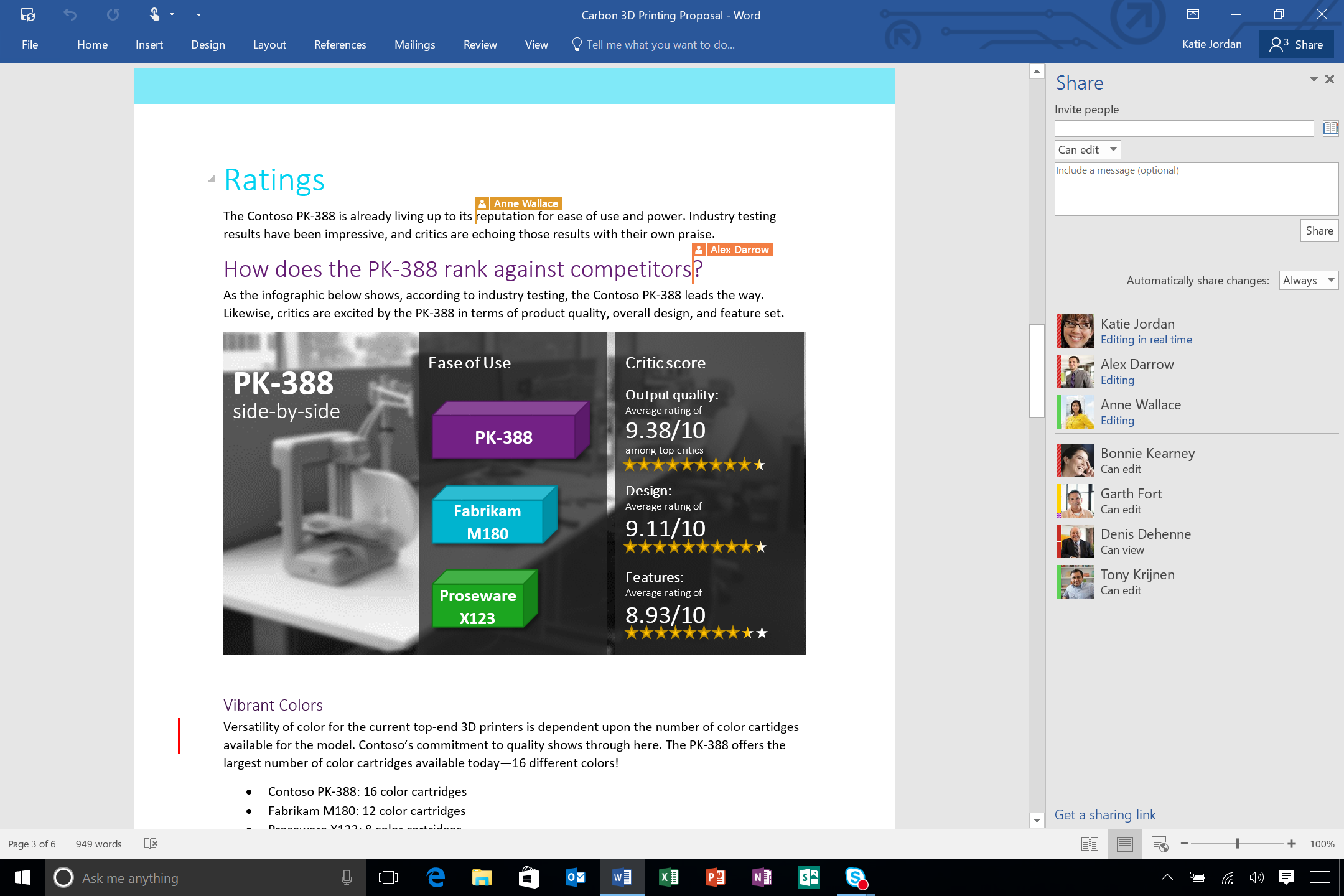 Windows 10 aside, there are a slew of features that are new for all Windows users. Microsoft didn’t provide us with a full list, but it did underline a few big highlights.

Office web apps have offered real-time coauthoring, which lets you see what others are writing and editing in the same document, since November 2013. Now the company is finally building the functionality directly into its native Office apps. We say “building” because not all the apps are getting the feature at launch: Word has real-time coauthoring now, but the rest will see it show up “over time.” Next up, Skype for Business is now available directly in the Office apps, and will be coming to Office Online later this fall. The integration means you can instant message, screen share, talk, or video chat right in your documents, plus start a real-time coauthoring session right from Skype. 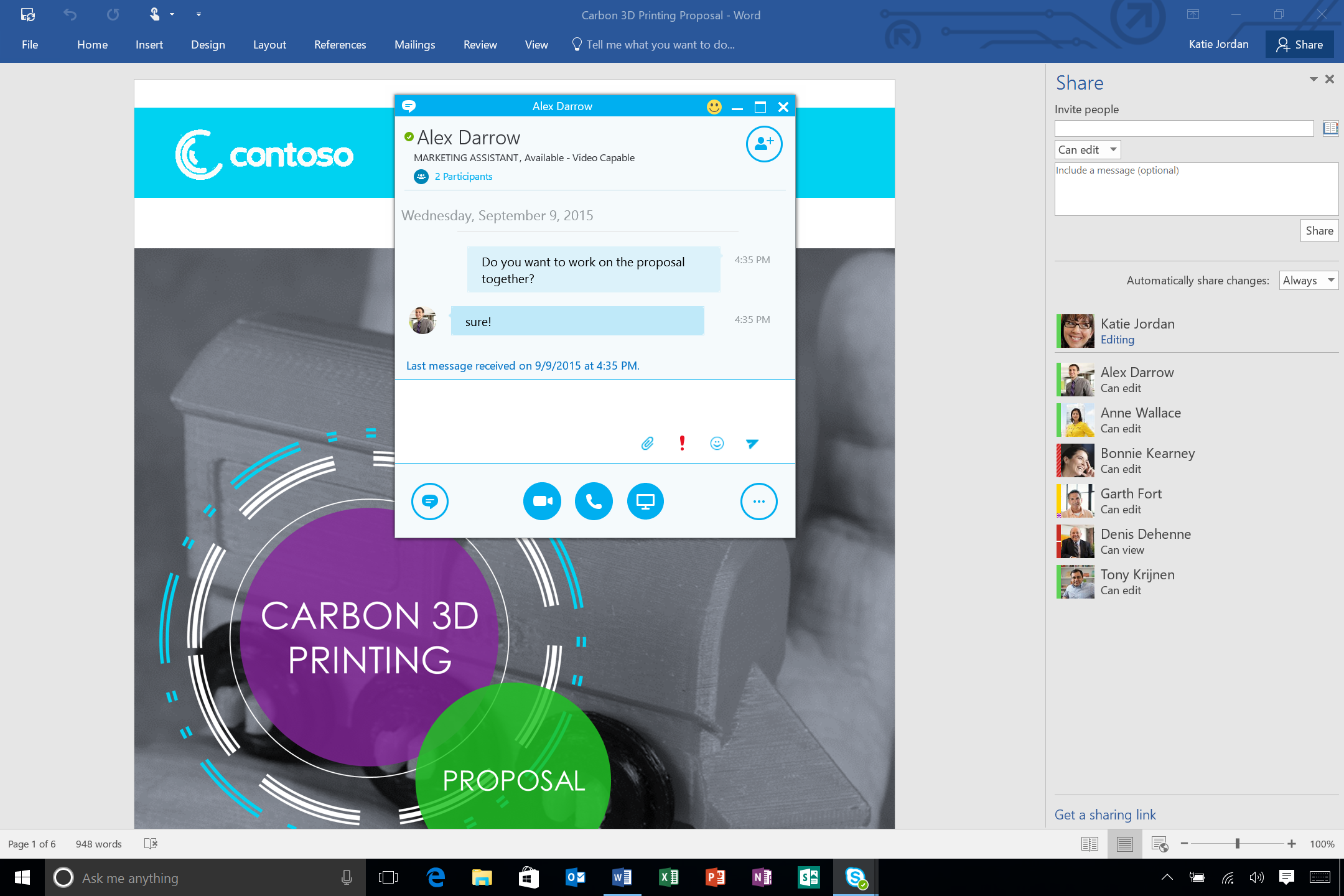 Microsoft is also releasing Office 365 Groups today, a feature included as part of Outlook 2016 and as an app for Android, iOS, and Windows Phone. In short, Office 365 Groups allows individuals to easily create public or private teams that share an inbox, calendar, notebook, and cloud storage for group files.

Last but not least, enterprise users will be happy to know Microsoft has added multiple new security features. Data Loss Prevention should reduce the risk of leaking sensitive data by letting IT admins create, manage, and enforce policies for content authoring and document sharing. Multifactor authentication enforces secure access to content when employees are away from the corporate network.

In its various Office 2016 communications, Microsoft promises again and again to add new Office 2016 desktop functionality on a regular basis (automatic updates will begin rolling out to consumer and small business subscribers next month, and to commercial customers early next year). In fact, the company is already sharing specifics in many cases.

OneDrive for Business will also be getting an update later this month, including a new sync client for Windows and Mac. Microsoft is promising enhanced sync reliability, increased file size and volume limits per user, a new user interface in the browser, mobile enhancements, and new IT and developer features.

In November, Cortana will be able to gather intelligence on your calendar and emails via Outlook 2016 support. This should work across both Windows 10 and Windows 10 Mobile. Speaking of which, once Windows 10 Mobile arrives, the Continuum feature will mean Windows phones can act as desktops. The Office team is promising you’ll be able to project, create, or edit PowerPoint presentations from your phone to a monitor while using the same phone to take notes with OneNote.

Originally unveiled in July, productivity app GigJam is now available in private preview. Microsoft expects GigJam will become part of Office 365 next year, describing it as “an unprecedented new way for teams to accomplish tasks and transform business processes by breaking down the barriers between devices, apps, and people.” 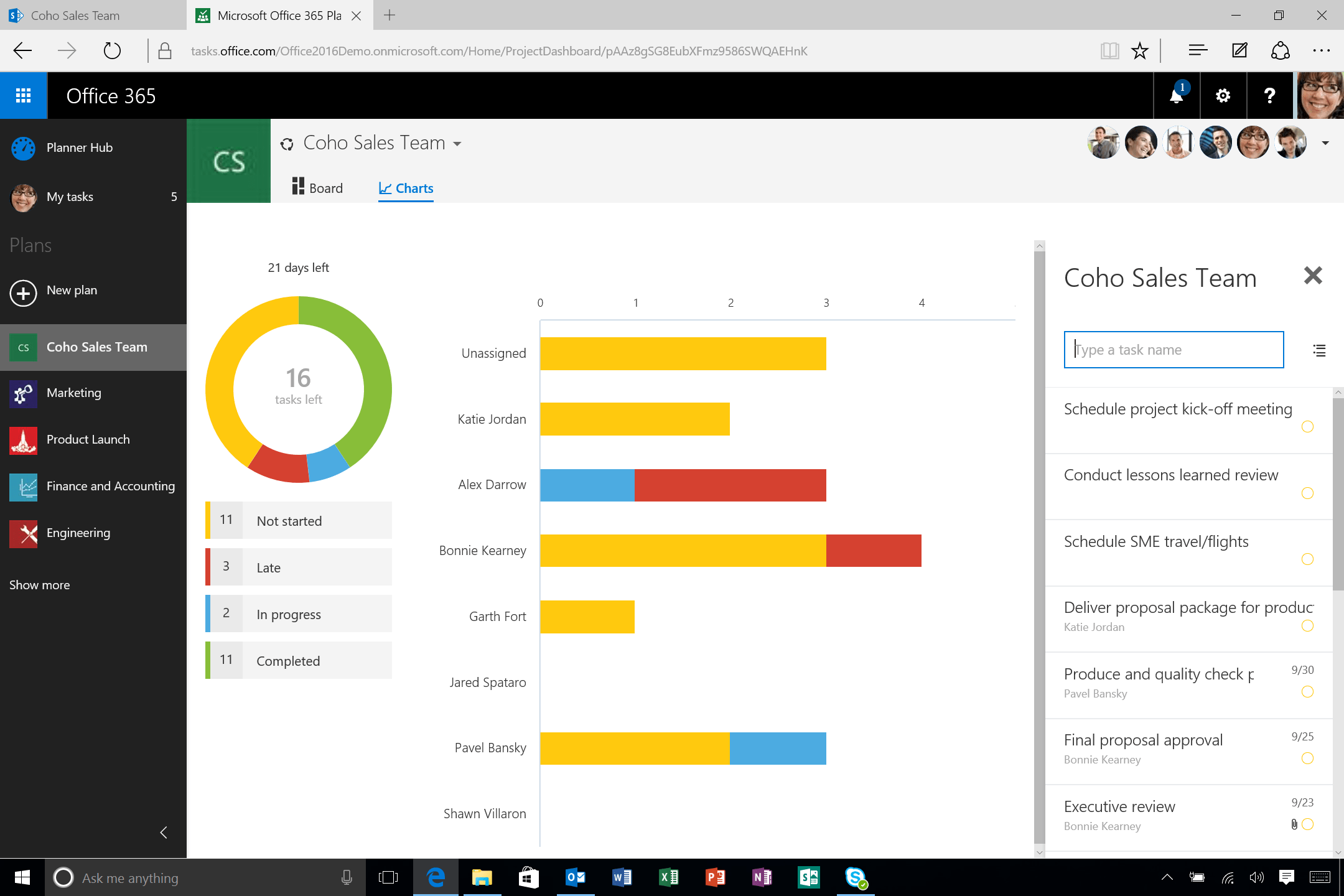 The last major piece of Microsoft’s Office push this year has finally fallen into place. While this is a big launch, the company is already promising a lot more for the next few months. The execution will be critical to ensuring the software giant’s Windows and Office platforms continue to bring in that massive productivity revenue.