Microsoft today launched Office Insider, an ongoing preview program for Office 365 subscribers looking to test new features and improvements coming to the suite’s apps. Office Insider currently only applies to Office 2016 for Windows, which arrived just two months ago, though Microsoft said that a Mac version “is coming soon.”

This is essentially the Microsoft Office counterpart to the Windows Insider program, which allows anyone to try preview builds of Windows 10. Testers can report bugs, try new features, and offer feedback to Microsoft on soon-to-be released features and improvements. The main difference is that the Windows Insider debuted before Windows 10 even went into preview, while Office Insider is launching long after Office 2016 has already shipped.

Nevertheless, the move ties into Microsoft’s plans to update its Office apps on a monthly basis. “Every month the Office engineering team ships updates across the Office apps, to include new functionality,” a Microsoft spokesperson told VentureBeat. This month, the big highlights are two new PowerPoint features: Designer and Morph.

The first is a cloud-powered recommendation engine and the second is smart animation technology. Both are tools that help automate the creation of slides and presentations, cutting down the time it takes to build a polished PowerPoint deck.

PowerPoint Designer is all about helping you build “differentiated” presentations. The workflow is as follows: Drop an image into your presentation, and if Designer detects that it can help, it will provide you with several design ideas in the right-hand pane which you can apply to the current slide. All you have to do is pick one.

So it’s like Clippy? Microsoft sure as hell hopes not. For Clippy, “pretty much 100 percent of the time you didn’t care,” Chris Maloney, senior program manager of PowerPoint, told VentureBeat. Designer is data-driven, meaning the right-hand pane only shows up “when we believe we are able to deliver something of value to the customer.” 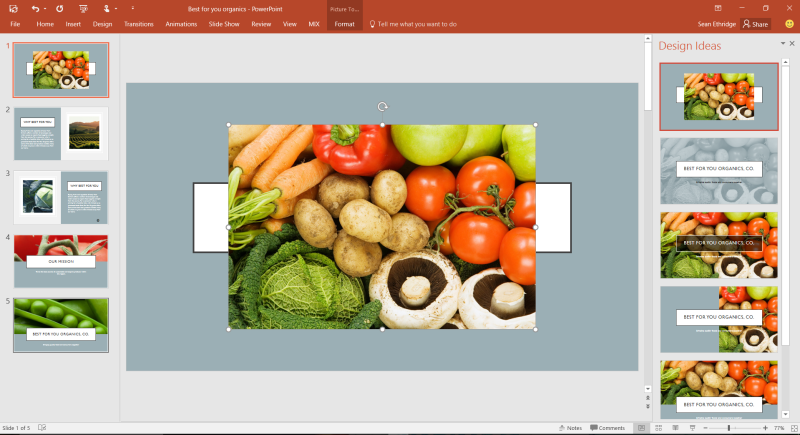 In fact, the feature uses machine learning: automated design and smart image analysis. Microsoft says professional graphic designers helped develop over 12,000 creative blueprints for Designer, which leverages cloud intelligence to analyze and figure out which blueprints works best with your content. The company used its own in-house professional graphics team to build the design ideas, though some originated outside of Microsoft.

Designer can detect if the image is a photograph (as opposed to clip art), contains a natural scene or a face, is a graph or chart, and so on. Based on that, it can decide which parts of your image should remain visible, if anything can be cropped, whether the image should go in the background or foreground, and what blueprints to suggest. “The end result is a high quality and customized presentation, in seconds,” Microsoft claims. 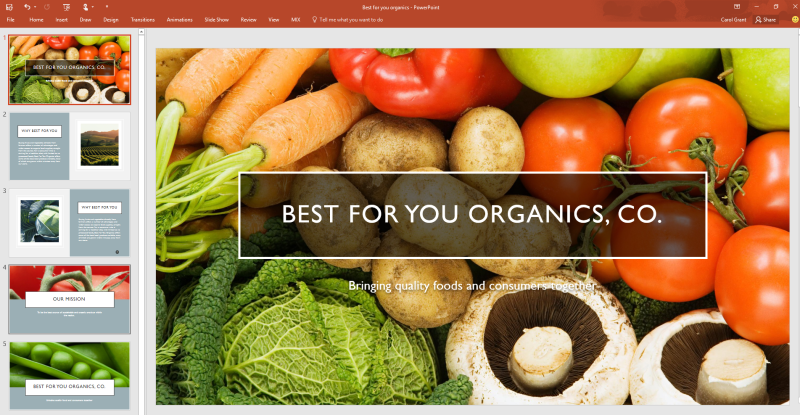 Because it is powered by the cloud, Designer will improve over time. Microsoft will not only add more design ideas, but it will also expand which slide types the tool can tweak.

PowerPoint Designer is all about helping you build “more impactful” presentations. The workflow for Morph is a lot more complicated: You’re essentially duplicating slides you want morphed together, moving objects based on how you want them to animate, clicking Morph, and hoping it knows what you’re trying to pull off.

It’s quick and dirty. But, when Morph works, the process can take just a few minutes to a couple of hours, depending on what you’re trying to create. That’s certainly better than days or even weeks for serious animations. 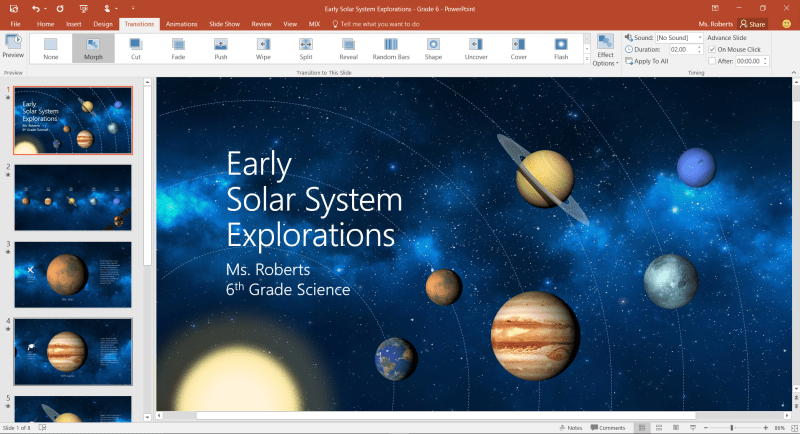 You provide the various states you want your object to shift into, and Morph does the heavy lifting. Transitions are set to 2 seconds by default, though you can naturally change this as you see fit.

You are building “cinematic motions,” as Microsoft calls them. Put more simply, Morph animates across slides. Rather than regular text or image animations, the tool can animate 3D shapes. It can be applied at a word or even character level, including text wrapping. 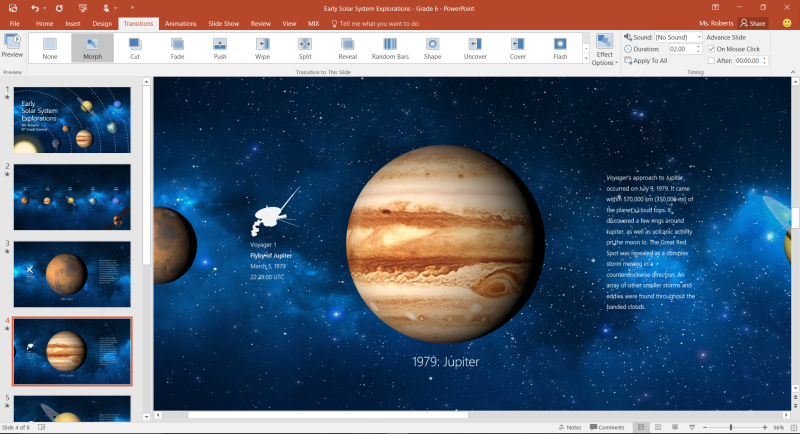 The goal is to make it more accessible to everyone who wants to use animations. Experts meanwhile get even more control and features around shape transformation.

The above features will only be available to Office 365 subscribers. Furthermore, while Microsoft is promising monthly updates, there is a delay this time around, largely due to the fact the Office Insider program also launched today.

“Moving forward, the first public availability of those updates will be Office Insider for consumers, and Office 365 First Release for commercial customers,” a Microsoft spokesperson told VentureBeat. “This allows us to get customer feedback from a small, actively engaged customer base and adjust if needed prior to rolling out more broadly. In many cases for monthly feature releases, there will be just a week or so between availability for Insiders and the broader customer base.”

In short, you can expect Designer and Morph to hit Windows users in two to four weeks and reach other platforms “in the coming months.” Starting in December, monthly updates will start rolling out broadly just a week after Insiders get it.