A new patent suggest that Microsoft is thinking a lot about holograms these days.

The Patent Office published a new Microsoft patent application today describing the use of floating holograms to guide a user’s gesture control of a computing device. By device, this could mean a laptop, smartphone, tablet, or game controller.

In general terms, the patent explains that a holographic light source installed somewhere on the physical device would cast a holographic image on top of the normal input mechanism (a physical keyboard or a touchscreen, most commonly). 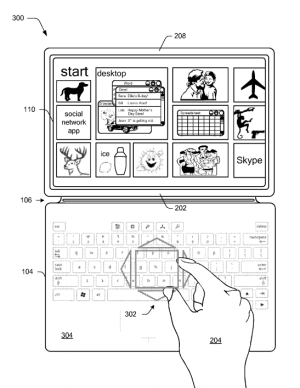 Above: Gestures control a hologram of a simple directional input.

The holographic image would give the user cues as to what hand gestures were available to control a given app or game running on the device. For instance, a laptop computer might cast a holographic image of a gaming interface, which would float over the physical keyboard of the laptop. The user could interact with the hologram in familiar ways, like moving a (virtual) joystick or rolling a control ball.

This is pretty futuristic stuff, and the technology may or may not have been tested. But Microsoft has recently shown an appetite for tackling ambitious new interface technologies. One needs only look at the company’s HoloLens augmented reality technology for proof.

In the wider view, these technologies are all about evolving our existing clunky modes of computer interaction toward more natural means. Using one’s voice or making hand gestures, for example, could feel more natural than typing on a keyboard or using a mouse.

“Gestures may be input in a variety of ways, such as detection of motion made by one or more fingers of one or more hands of a user by touchscreen or other functionality,” the patent reads.

“However, gestures may suffer from a problem in that a user may not be made aware of what gestures are supported by the device. In other words, a user may be faced with having to ‘guess what to do’ in order to engage in such interaction, which may be frustrating and limit the amount of functionality that is available to a user of the device.”

The hologram would fix that problem by guiding and prompting the user’s gestures.