Improving a device’s signal might be as simple as increasing the number of antennas within the device, according to new research. A team at MIT’s Computer Science and Artificial Intelligence Laboratory (CSAIL) claim they’ve managed to bolster connectivity with what they call RFocus, a software-controlled external  “smart surface” that uses an array of more than 3,000 wireless antennas. Preliminary tests show that it’s able to boost average signal strength by a factor of nearly 10 and channel capacity by a factor of two.

“The core goal here was to explore whether we can use elements in the environment and arrange them to direct the signal in a way that we can actually control,” said senior study author Hari Balakrishnan, who is scheduled to present the results next month at the USENIX Symposium on Networked Systems Design and Implementation (NSDI) in Santa Clara, California. “If you want to have wireless devices that transmit at the lowest possible power but give you a good signal, this seems to be one extremely promising way to do it.”

In many wireless systems, transmitters direct their signal to ensure more of it reaches the intended receiver, improving communication throughput and range and reducing interference with other transmissions. A radio’s ability to make its signal depends on its size; a radio that’s physically larger can direct its energy better than a smaller radio. But large radio antenna configurations are hard to deploy, even in infrastructure base stations or access points. 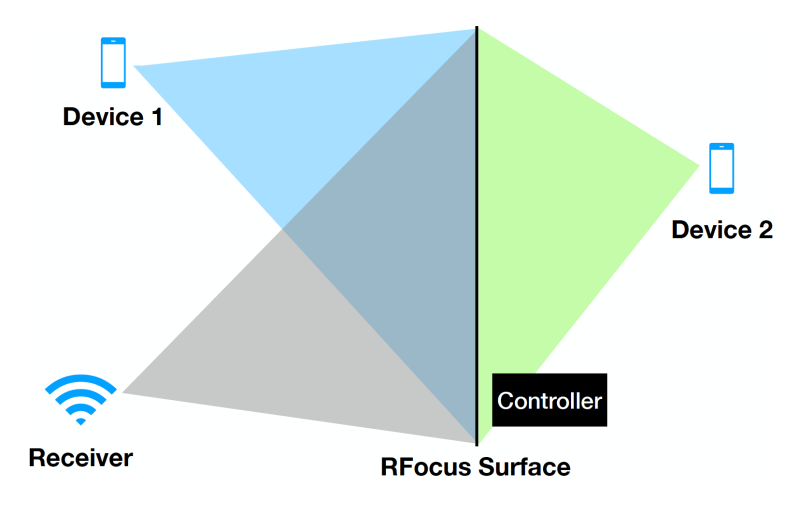 RFocus attempts to solve this with a two-dimensional surface comprising antennas that let a signal through or reflect it. The state of the elements is set by a software controller, with the goal of maximizing the signal strength at a receiver. This enables RFocus to not only maintain a high level of performance but to remain cost-effective at scale because the antennas cost only a few cents and because the surface can be manufactured as an inexpensive thin wallpaper requiring no wiring.

Study coauthor and Ph.D. student Venkat Arun envisions this system being used in a warehouse to connect hundreds of sensors that monitor machines and inventory. He notes that a similar technique was described in a recent paper published by a Princeton University team but says RFocus is even less expensive and is suitable for a wider range of scenarios.

“The biggest challenge was determining how to configure the antennas to maximize signal strength without using any additional sensors, since the signals we measure are very weak,” Arun said. “We ended up with a technique that is surprisingly robust.”