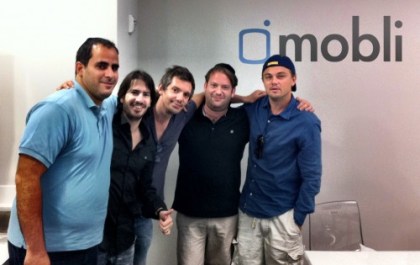 Mobli, a photo sharing application, said today Leonardo DiCaprio will be advising the company and also participated in a $4 million first round of funding, along with other private investors.

The technology sector has seen a recent onslaught of celebrity investors such as DiCaprio, Will.I.Am, Lady Gaga and Ashton Kutcher, who is now playing an internet tycoon on CBS’ sitcom Two and a Half Men. But many have to wonder, do these people actually have the tech know-how to advise a technology company? For Mobli chief exectuive Moshiko Hogeg, however, it’s not about the technology knowledge:

“[DiCaprio] has zero tech background,” he explained in an interview with VentureBeat. “It’s about him knowing and understanding branding and marketing.”

Mobli colors itself a way to look at the world through another person’s eyes, as well as a way to get in touch with celebrities and others who aren’t readily accessible. Currently the site is host to celebrity accounts such as DiCaprio’s, David Arquette’s and Paris Hilton’s. The app lets you search for photo and video content through different verticals, such as food, music, fashion and sports. According to the company’s blog post, Mobli is seeing over 10,000 new users a day.

In his advisor role, DiCaprio will help the company work with its image.

“[There are] obvious reasons [to work with DiCaprio] such as he’s a major high profile celebrity, which can open a lot of doors,” said Hogeg.

Hogeg wants to make Mobli the same type of brand for mobile videos and photos as YouTube is for online videos. Currently, the company’s biggest vertical is not celebrities or sports, but news. For example, when Libyan dictator Muammar Gaddafi was killed this week, people flocked to Mobli to find related content.

Overall, Hogeg is excited about the future with DiCaprio.

“These people are business people too,” he explained, “They invest in real estate and the stock market and no one says anything.”