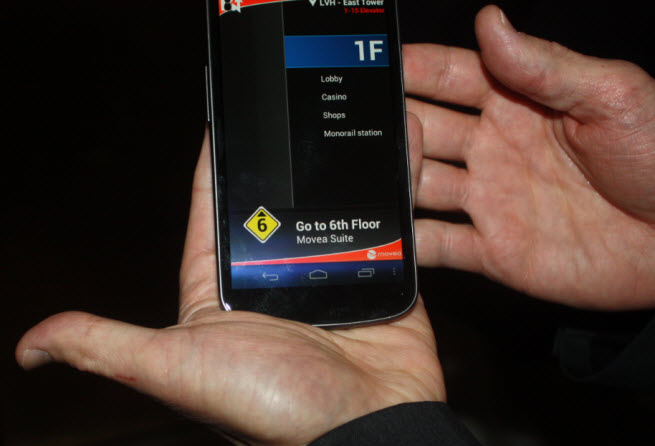 Movea showed off a way to use a phone’s existing sensors to calculate your position indoors, a beast of a problem for mobile devices. Typical global-positioning system (GPS) satellite data works outdoors, with a line of sight to satellites in space. Wi-Fi triangulation helps improve accuracy. These technologies aren’t as useful inside buildings where signals don’t reach.

But Movea demonstrated accurate indoor navigation at the Consumer Electronics Show in Las Vegas last week. Movea’s indoor navigation systems uses signals from an accelerometer, magnetometer, gyroscope, pressure sensor, Wi-Fi, GPS, and matching against known maps. The first thing Movea’s mobile app does is ask you for your height. From that, it can estimate your step length. When you move, the accelerometer in your phone registers the step, and the app then figures out that you’ve moved. The magnetometer, used for a compass, determines which way you are facing.

Movea takes into account the difference in step length when you are moving faster or slower. Over time, it figures out your trajectory and then uses it for your location.

At the Las Vegas Hotel, David Rothenberg, director of marketing and partner alliances at Movea, showed how his company created software that could calculate a route through the middle of the hotel, up the elevators to the sixth floor, and to the right room.

“It’s very early days for indoor navigation, so you’ll see occasional artifacts,” he said as we walked through the halls of the hotel. “Once inside, we use no Wi-Fi, no GPS, and no cellular network data.”

One thing that improves accuracy is “map matching.” It picked up accurate blueprints for the inside of the hotel from the owner. It uses those to match your location. If you’re walking down a hallway, it will correct the location if you suddenly seem to be walking through room walls, based on faulty step calculations or faulty sensor signals. The system is context aware. If you are in an elevator, it knows that. If it senses a change in the pressure, it will figure out that you are going up the elevator. The pressure change was measured by a pressure sensor, which is present in the Samsung Galaxy III smartphone that Rothenberg used.

Rothenberg’s smartphone screen showed the path the whole way, though it had to halt a couple of times to fix its bearings. As we rose in the elevator, Movea’s software figured out which floor we were on, and it prompted us to get off when we hit the sixth floor. Movea put its logo in the hallway on the sixth floor. Rothenberg pointed the phone’s camera (using augmented reality) at the logo to reset the map to the sixth floor blueprints. From there, he walked to the Movea suite.

This kind of calculation won’t work in uncontrolled environments yet, particularly if the company doesn’t have indoor blueprints for a building. But indoor location isn’t so crazy an idea as phones become equipped with more and more sensors.

One of the challenges is getting blueprints for the indoor landmarks within every building on the planet. That’s going to take some time to do. Mapping companies such as Google have embarked on that task, and Movea will be happy to help them calculate location accurately once they did out that data.