Last week, Mozilla updated Firefox with Pocket integration. Over the weekend, some Firefox users began to voice their displeasure over the move on public forums like Bugzilla, Google Groups, and Hacker News.

Pocket is a service for managing a reading list of online articles (it allows you to save stories, videos, and websites to check out later). Pocket is already offered as a Firefox add-on, and although Mozilla was developing a homegrown Reading List feature for the browser, the company decided to simply integrate Pocket directly into Firefox.

The complaints center around the fact Pocket is a proprietary third-party service, already exists as an add-on, and is not a required component for a browser. Integrating Pocket directly into Firefox means it cannot be removed, only disabled. 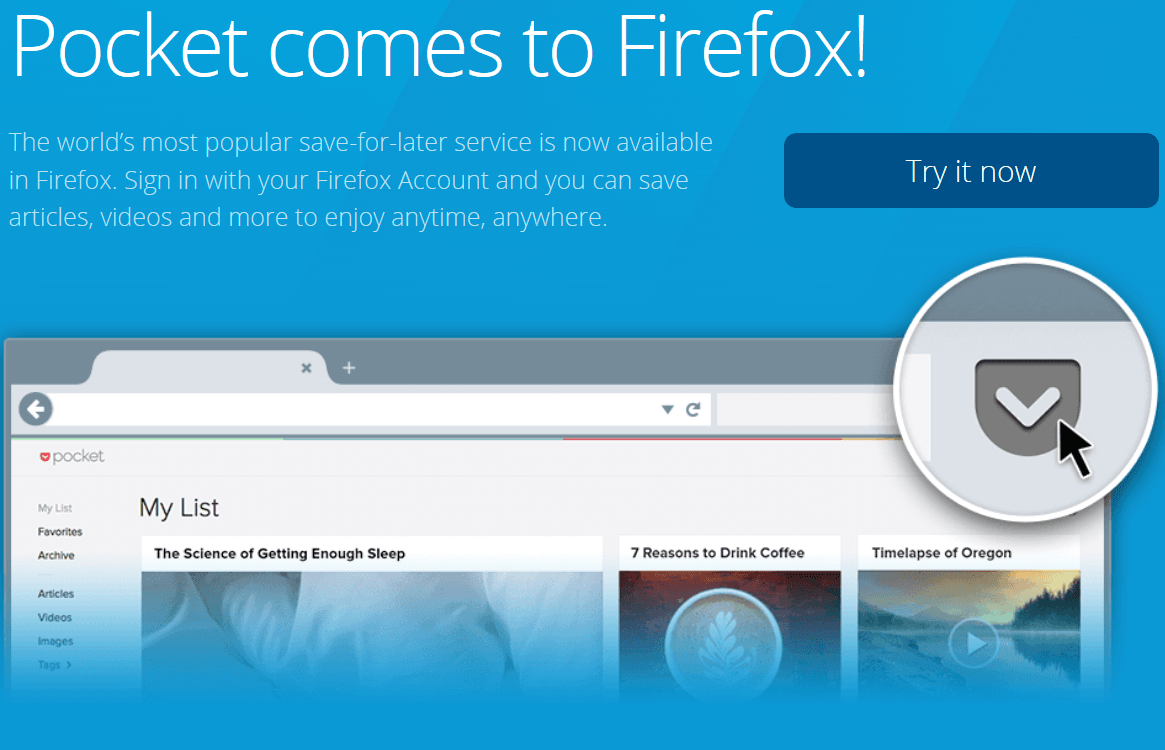 The argument follows that bundling the Pocket add-on directly into Firefox would have been a better option. Add-ons can always be entirely removed from Firefox.

While Firefox’s user interface allows the user to remove Pocket from the toolbar and menu, the only way to properly disable it is in about:config (search for browser.pocket.enabled and set it to false). Firefox users point out that this isn’t very user friendly, and is very unlike Mozilla.

Finally, many Firefox fans feel there wasn’t nearly enough communication that this Pocket integration was coming. Mozilla is typically very transparent about its plans, and while this didn’t come out of the blue, many were still taken by complete surprise.

Those are the complaints. When VentureBeat reached out to Mozilla for an explanation over the weekend, the company took some time and responded a couple days later with the following statement:

Pocket has been a popular Firefox add-on for a long time and we’ve seen that users love to save interesting Web content to easily revisit it later, so it was an easy choice to offer Pocket as a service in Firefox and we’ve gotten lots of positive feedback about the integration from users.

All the code related to this integration within Firefox is open source and Pocket has licensed all the Firefox integration code under the MPLv2 license. On top of that, Pocket asked Mozilla for input on how to improve their policy, based on early comments from Mozillians. After that discussion, Pocket updated their privacy policy in early May to explain more precisely how they handle data. You can read Pocket’s privacy policy here.

Directly integrating Pocket into the browser was a choice we made to provide this feature to our users in the best way possible. To disable Pocket, you can remove it from your toolbar or menu. If Pocket is removed from the toolbar or menu, then the feature is effectively disabled, though you can still find it again by accessing it in the Customize Panel. You can find detailed instructions here.

In other words, Mozilla believes it has done everything in the way an open-source company should. For hardcore Firefox users, however, that may not be enough.

At the end of the day, Mozilla has bundled a closed-source tool into its open-source browser. Many believe this was unnecessary, regardless of how the company went about it, because Pocket is not critical to Firefox’s functioning and thus should have remained as an optional add-on.