LG’s new Nexus 5X played second fiddle to Huawei’s fancy new Nexus 6P at a Google press event last month. But the 5X is no prop. Were it not for the 6P, it could have handled the spotlight perfectly well on its own.

It commands respect from the second you rest your finger on the fingerprint scanner, and the niceties in Android Marshmallow are on display long after that. It is a commendable phone being sold for a commendable price.

With its 5.2-inch screen, the 5X is not too big, and not too small. The phone is slim and not too heavy for you to hold with one hand. You can get a grip on it. The camera on the back is a joy to use.

It does not lie flat. The battery could last longer. You can’t change the name of the phone for speech recognition purposes, unlike on, say, Moto X Pure Edition.

But you’ll get a very good little computing device if you choose to buy a Nexus 5X, which starts at $379 for 16GB of storage and runs $429 if you want 32GB. You can be confident that it’s a respectable successor to the Nexus 5 and arguably the best Nexus phone ever made — were it not for that 6P. 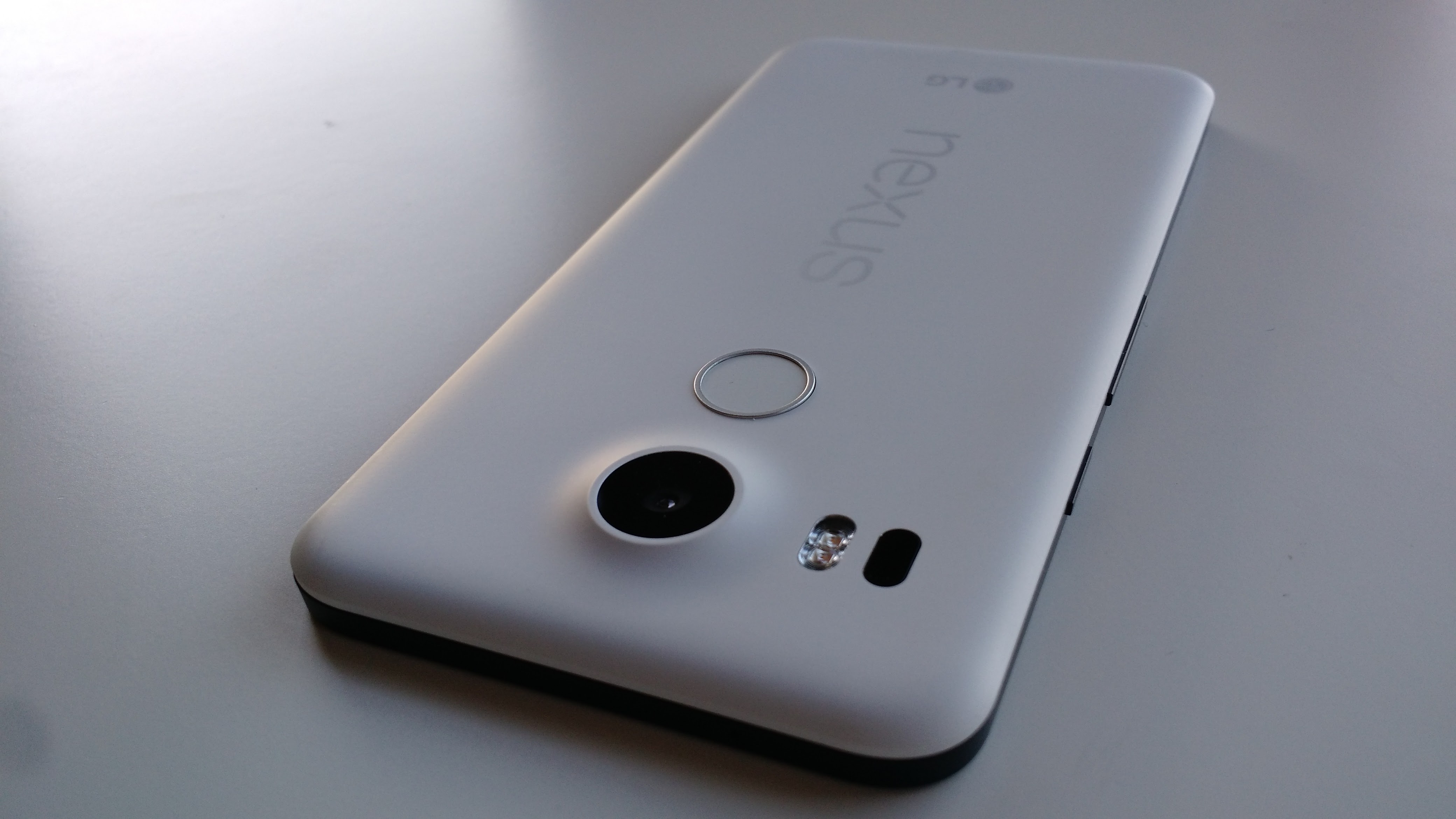 Above: The back of the Nexus 5X.

The shape of the Nexus 5X is distinct from that of its predecessor. Gone is the oblong look of the Nexus 5, with its straight edges on the top and bottom. From a distance the 5X could be mistaken for an iPhone. The big Nexus branding on the back is a holdover from the Nexus 5, although it’s no longer etched in. The large disc around the back camera has been dropped, and the camera itself has been moved to the center of the phone.

The little dots on the bottom of the Nexus 5 have been taken out of the design. There are now two sleek perforated bars on the front near the top and bottom of the Nexus 5X. The plastic covering on the back is more matte than glossy. It’s a departure from the rubbery back on the Nexus 5, and maybe not in a good way, but I do think it’s easier to grasp than the new 6P. 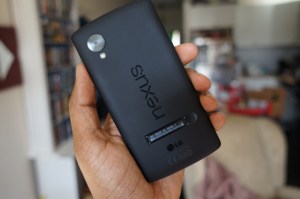 The 5X is rocking the USB Type-C jack on the bottom where the micro USB jack used to be. (Unfortunately the charging cable doesn’t work with my car charger, and my laptops can’t accept it, either. A conversion cable can solve these problems.) Also on the bottom of the 5X: the headphone jack. On the Nexus 5 it was on the top. I welcome the move downward; in the car, that means my headphone cable is less likely to get tangled, and when I’m walking, the cable no longer sticks up in the air like some sort of weird antenna.

When you lay the phone down on a flat surface with the screen facing up, you may experience a sudden sense of disappointment. The camera stands out from the rest of the back of the phone just enough — about a tenth of an inch — that it makes the phone taller toward the top. It’s not nice and even. As a result, if you push down on the edge of the phone with the screen facing up, the phone will tilt. That’s annoying when you hit a button with a bit of force and the phone gets a bit off-balance. There is no strangely satisfying spin like there is on the Moto X (2nd Gen).

But hey, at least the phone lies flat when the screen is facing down. To be fair, camera bumps have become seen on several smartphones in the past few years, so maybe I should try to get over this.

The vibration engine on this thing is strong. If you tap keys fast enough while you’re sitting in a quiet place, it sounds like you’re playing some 1980s video game, like Frogger or Centipede. The audio coming out of the single front-facing speaker on the 5X did not seem to be as full and rich as it is on the Moto X Pure Edition, which has front-facing stereo speakers. And I could do without the front-facing pulse notification light.

It eats my fingerprints for breakfast 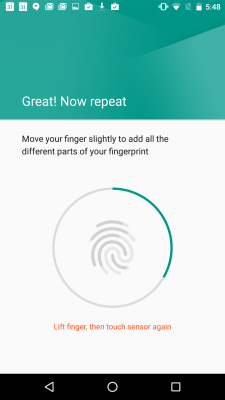 Above: Setting up the Nexus 5X’s fingerprint scanner.

My favorite thing about this phone is on the other side. It’s the fingerprint scanner. It’s the thin metal ring below the camera.

And it’s easy to set up — go to the security section of the Settings app and select Nexus Imprint, and then you hold six different parts of your fingertip over the scanner, so it can recognize the finger at different angles. You can register as many as five fingers.

A few iPhone owners who played around with the 5X have asked me why the fingerprint sensor isn’t on the front. Well, the 5X and 6P are just different like that. And because I’ve been trained to have my finger in the indentation on the back of the Moto X (2nd Gen) and more recently the Moto X Pure Edition, this actually feels natural and nice.

Fingerprint scanning on the 5X is fast, easy, fun — all good things that make feel like I am going to want it on every phone I buy from here on out. Do you know how easy it is to use Android Pay now? So easy.

Above: I used Android Pay to buy a chocolate bar from Peet’s.

They should’ve made this camera before

The 12.3-megapixel camera on the back of the 5X is among the phone’s greatest assets.

The camera is particularly impressive at night, when Nexus phones have historically struggled to take good pictures. Not every photo is perfectly clear when you’re shooting at night, but if you stick around and shoot long enough, you’ll go home with something workable. No longer are night photos essentially useless by default.

You can open up the camera quickly in two ways. First, if your phone screen goes off while the Camera app is open, you can open it right back up in a jiffy by holding down the fingerprint scanner. Or, no matter which app you were using before the screen went off, you can turn the camera back on by hitting the power button two times fast.

The back camera on the 5X is better than the one on the Nexus 5, just as the 5’s back camera was an improvement on the 4’s. The 5X camera might even outdo that of the Nexus 6, at least in the dark.

Slow-motion video in the Camera app is, of course, dope.

The five-megapixel front camera is passable.

It’s sort of a shame that the very good back camera didn’t arrive earlier in the history of the Nexus. If there’s any part of this phone that gets the “most improved” award, it’s got to be the camera.

Wish it could last a little longer

If you’re like me, you’ll get excited the first few times you plug in the USB Type-C charger. It’s like living in the future! You can’t put it in the wrong way.

But the excitement will wear off when you see it doesn’t deliver power as fast as, say, some Motorola phones that come with turbo-charging adapters. Coming off a nearly dead battery, I was able to pick up a 25-30 percent charge in 30 minutes. A full charge generally took about two hours. I wish those numbers were a little better, considering that the 2,700 mAh battery doesn’t hold its charge for as long as I would like — around 16 hours is not unusual, and nearly 24 hours with light usage — and that the phone has Android Marshmallow’s Doze battery-saving feature.

I saw my battery life drop while doing a one-hour Skype video call and, right after that, a half-hour voice call on Messenger. 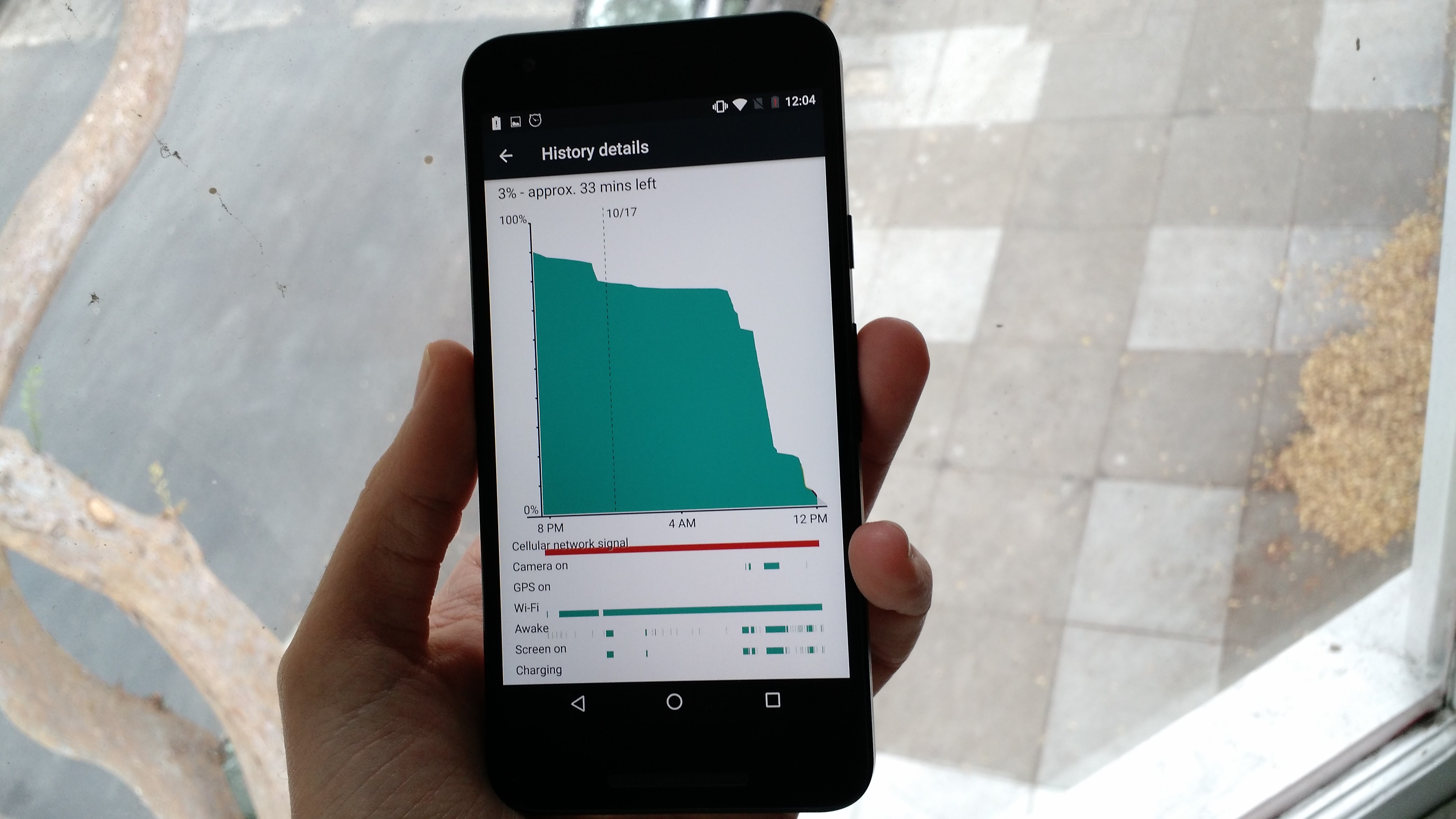 Above: Notice how the 5X’s battery life chart takes a free fall when I’m making a Skype video call and a Messenger voice call.

Maybe I’m just spoiled by the long-lasting battery and the fast charging of the Moto X Pure Edition.

Like the Pure Edition and the 6P, the 5X is unlocked and can be purchased from the Google Store — it’s not available at your local Verizon or AT&T store. Google says the 5X will run on any network. I was able to get it running with a colleague’s AT&T SIM card, but my own Verizon SIM card wouldn’t work, and tests of a few Verizon SIM cards at a Verizon store were not fruitful.

But the 5X is one of the first few phones to be able to use Project Fi, Google’s mobile virtual network operator (MVNO) service for calls, data, and Wi-Fi. I didn’t get to try Fi for the purposes of this review, but it does look promising, given its cost structure.

Because Project Fi is the easiest way to get service on the 5X, you should probably familiarize yourself with the service before buying the phone.

The 5X is more reserved than the splashy 5.7-inch Nexus 6 but is still performant. It’s packing a Qualcomm Snapdragon 808 chip (the same one found in the LG G4, the Lumia 950, and the Moto X Pure Edition), an Adreno 418 GPU, and 2GB of RAM. I ran into some latency when I was switching between apps while on video calls, but otherwise the phone responds to input very quickly. When you say “OK Google,” you can start speaking pretty much immediately. Google Now on Tap also brings up results in a jiffy. And because it’s a Nexus, it will receive OS updates from Google sooner than other phones. 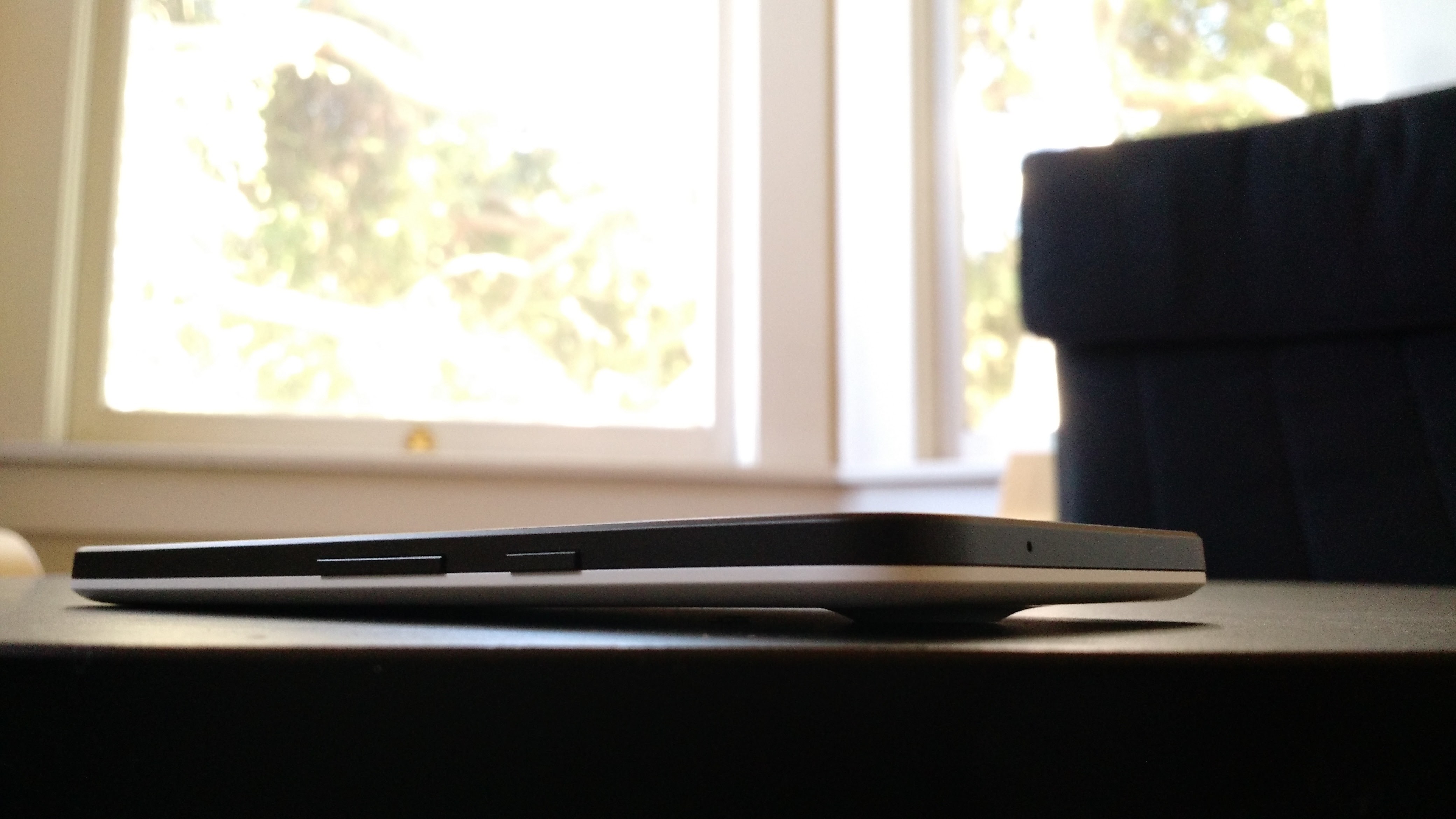 Above: The Nexus 5X does not lie flat, darn it.

Sure, there are shortcomings, but I don’t think they’ll prevent the Nexus 5X from selling at least as well as the Nexus 5. That said, the 5X phones will likely be rarities relative to Apple’s latest iPhones.