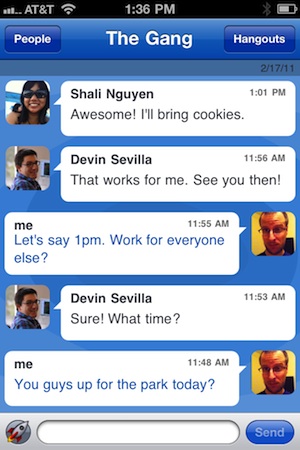 Build-your-own social network company Ning has seen some big changes in the last year. And here’s another one — in addition to providing the technology for everyone else’s social network, it’s launching a mobile social app of its own, called Mogwee.

Ning describes the app as “the best of mobile, all in one place.” Basically, it seems to combine a number of lightweight social networking features for interacting with your existing friends and family. You can create groups called “Hangouts,” and then break off into one-on-one chats. You can also send your friends virtual gifts, share photos, and play games.

The idea of a chat app may not sound all that innovative on its own, but Ning chief executive Jason Rosenthal said the goal was to reinvent social communication for the mobile phone, mainly by making it super-simple and easy-to-use. It seems like other startups think there’s an opportunity here too — for example Yobongo is developing a proximity-based chat app.

So why is Ning doing this? Until now, the company has focused on recruiting brands and other businesses rather than going directly to consumers, especially after it eliminated its free product last year. (Ning says it now has more than 90,000 paying customers.) Rosenthal said he and chairman Marc Andreessen were just convinced that mobile is the future of social networking, and while they’ve already incorporated mobile app builders into Ning, they also wanted to launch an app of their own.

“The fundamental social DNA in the two services is pretty aligned,” Rosenthal said.

Rosenthal added that after his experience with Ning, he didn’t want to build a product that didn’t have an obvious business plan. In the case of Mogwee, the app is free, but after the first few virtual gifts you have to pay for them.

You can download Mogwee here from Apple’s App Store. The company plans to launch on Android and other mobile platforms soon.