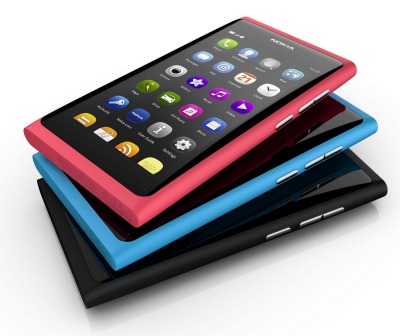 We’re still months away from Nokia’s first official Windows Phone 7 device, but the company had another phone up its sleeve to introduce tonight at its Nokia Connection event in Singapore: the N9, a long-rumored MeeGo-powered smartphone.

The mockups of the N9 are indeed gorgeous (check out the video demo below), but I’m finding it difficult to work up excitement for the device when it’s clearly a side project for Nokia. The company’s main goal now is to deliver flagship Windows Phone 7 devices — not to pretend as if a MeeGo phone is anything but a curiosity today. And I don’t suspect the N9 will attract many third-party developers, as beautiful as it is.

As a sequel to last year’s N8, which had some great hardware that was shackled by Nokia’s aging Symbian OS, the N9 appears to be a success on paper. It sports a 3.9-inch curved glass AMOLED display that leaves little room for anything else on the front. There’s no home button to speak off (the phone is unlocked by a double-tap). The N9’s case is made from a polycarbonate material that Nokia says will have better antenna performance than some competitor designs. The phone sports a unibody design that sits somewhere between Nokia’s design for the N8 and an Apple device.

Nokia has included a powerful 8-megapixel camera with Carl Zeiss optics (natch), which is capable of recording HD video. The N9 also has NFC capabilities, which makes it suited for mobile payments and communication between NFC-enabled accessories (like Bluetooth headsets). Nokia also saw fit to include a revamped Maps applications that includes free in-car navigation, and the N9 is also the first phone to support Dolby Digital Plus.

The images and video Nokia has released of the N9 are clearly mockups, but from the looks of it the phone’s MeeGo interface resembles a cross between Android and WebOS. The phone sports three home screens arranged in a carousel, including a typical screen full of icons for apps, a multitasking screen for switching between open apps, and a screen dedicated to social networking alerts and other notifications. There’s also a Webkit browser with wide HTML5 support. The N9’s software definitely seems more polished than any previous version of MeeGo that I’ve seen, but again it’s important to note that we’re not looking at actual hardware yet.

In the end, the N9 just seems like a mark of pride for Nokia. As gorgeous as it is, I have a hard time believing that developers would pay much attention to the phone when there’s no guarantee that Nokia (or other manufacturers) will ever deliver another MeeGo device. In fact, Nokia previously said that it’s approaching the N9 as a sort of experiment. Intel, Nokia’s partner in crime for MeeGo, hasn’t had much success convincing developers to bring apps to MeeGo netbooks and tablets either.

Indeed, it seems more prudent for developers to pay closer attention to Nokia’s work with Windows Phone 7. With Nokia’s support, that platform could end up being somewhat competitive against the iPhone and Android. But unfortunately for MeeGo, all seems lost.