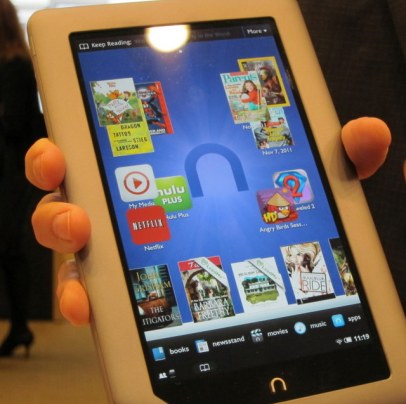 Let me make it clear up front: The Nook Tablet looks and feels exactly like last year’s Nook Color. But Barnes & Noble is hoping that its beefed up hardware will make it a worthy contender against Amazon’s upcoming Kindle Fire tablet.

At Barnes & Noble’s launch event for the tablet in New York City today, I was able to get a bit of hands-on time with the Nook Tablet. I also chatted with the company’s CTO of digital products, Ravi Gopalakrishnan, who gave me a tour of its capabilities (see video below).

The Nook Tablet sports the same industrial design as the Nook Color, but as I said in the tablet’s launch announcement, that’s not necessarily a bad thing. It’s still just as light, durable, and attractive as its predecessor (in fact, it’s a few hundred grams lighter than the Nook Color).

But the device really shines when you throw HD video or games at it — basically, any task that takes advantage of its fast dual-core processor. It loaded up high-definition Netflix streams quickly, though the demonstrations at the event today didn’t have much else to stress the device.

Right now, it seems Barnes & Noble is relying on consumers to manually add their own music and video to the Nook Tablet. The lack of an integrated digital media store is glaring, but Gopalakrishnan tells me that’s going to change sometime soon. For now, B&N says that it’s satisfied to focus on the digital book, magazine, and textbook market.

The Nook Tablet is powered by Android 2.3, codenamed “Gingerbread”, but it’s running a very customized version of Google’s OS. Just like the Nook Color, you won’t be getting access to the full Android Marketplace, but B&N reps tell me that you’ll still have access to thousands of Android apps. Web browsing on the tablet and launching games like Angry Birds felt slightly faster than its predecessor.

Overall, the big takeaway from the Nook Tablet is that it’s fast. But at $249, I’m not sure if the new hardware will mean much to consumers when deciding between the Nook Tablet and the $199 Kindle Fire. The Nook Color itself, now $199, will likely also steal away some potential customers.

Check out my chat with Gopalakrishnan below. (Please excuse the shaky cam, crowded events always make for chaotic videos.)