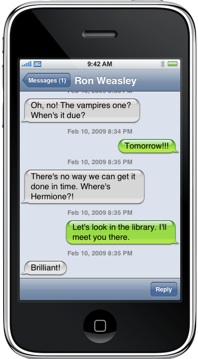 Infinite SMS launched a little more than a month ago, offering users a relatively easy way to tap into Google’s text messaging feature on your mobile phone. Despite some usability issues — mainly that you have to keep the app open to see new messages, plus, messages you send don’t appear under your phone number — it seems to have been a hit. Innerfence’s Derek Del Conte tells me the app reached the number eight spot in Apple’s list of bestselling paid iPhone apps. But that success also brought Infinite SMS some trouble, at least according to the statement from Google that Innerfence posted on its blog:

Infinite SMS is a third party app that has been using Google technology to provide free SMS for users, while we were paying for the cost of the text messages. While Google is supportive of third party apps, we’ve decided we can’t support this particular usage of our system at this time. SMS chat is still just an experiment in the early testing stages in Gmail Labs. We’re blocking all external XMPP clients from sending SMS; we’re not singling out Inner Fence.

Google’s position on this seems reasonable — it doesn’t make sense for Google to shoulder the costs of the messages while Innerfence makes money off the deal. There’s no such thing as a free lunch, and all that. And Google is very open about the fact that Gmail Labs features are experimental and that features could change or be dropped completely.

But I’m also sympathetic to Del Conte’s point that Innerfence “acted in good faith, accessing a feature publicly announced by Google over open protocols they made available,” especially since there are tons of Google services that have some kind of testing label (Gmail itself is still officially in beta testing).

Let’s hope this isn’t the end of the story. Infinite SMS was a paid app after all, so (fingers crossed) there should be some way to make things work out economcially for both Innerfence and Google.