Nvidia announced its latest effort to become the visual computing provider for the cars of the future.

Dashboards have become like the “jewelry of the car,” with big screens for rich turn-by-turn 3D navigation and gauges for fuel and speed.

“The subtlety of the glass and lighting comes out,” Huang said.

“We don’t offer just the chip, but the entire reference platform,” he said. “It’s an end-to-end platform, all the way
from processor to software.”

Car dashboards are changing because of the requirement to put in backup cameras into the cars. That means that the cars need good screens, and that is prompting a lot of car makers to design more elaborate screens into their cars. Nvidia is creating a platform that makes it easy to create cool customized screens and dashboards in a car.

But graphics isn’t the only thing a car needs to do. If you think of self-driving cars of the future, the car will need to be able to plot a path, using a lot of computing resources. The car will have to be software updatable, Huang said.

For that purpose, Nvidia is also introducing the auto-pilot car computer, dubbed the Nvidia Drive PX. That has dual Tegra X1 processors with 12 camera inputs. It can process data at a rate of 2.3 teraflops. (A teraflop computer once required 10,000 processors back in 2000).

Huang said cars need that computing power because they have some very difficult problems to solve with self-driving tasks. A car has to recognize objects around it, and it can do that using a “deep neural network,” or a self-learning processing system modeled on the human brain. Nvidia’s car computer is geared to solve such problems, allowing a car to recognize objects such as pedestrians in a cross walk.

He said that Audi has been working on car “infotainment systems” for some time, and it agrees that visual computing has become a big deal for car designers. Audi is designing “high-performance instrumentation clusters” into its cars that give drives more information as they drive.

Hudi said that Audi has used Nvidia’s K1 processors in the past. He showed an image of the Audi Prologue, a concept car with a lot of 3D dashboard displays. Hudi said he needs more computing power, and Huang replied, “Anybody who needs more pixels is music to my ears.” 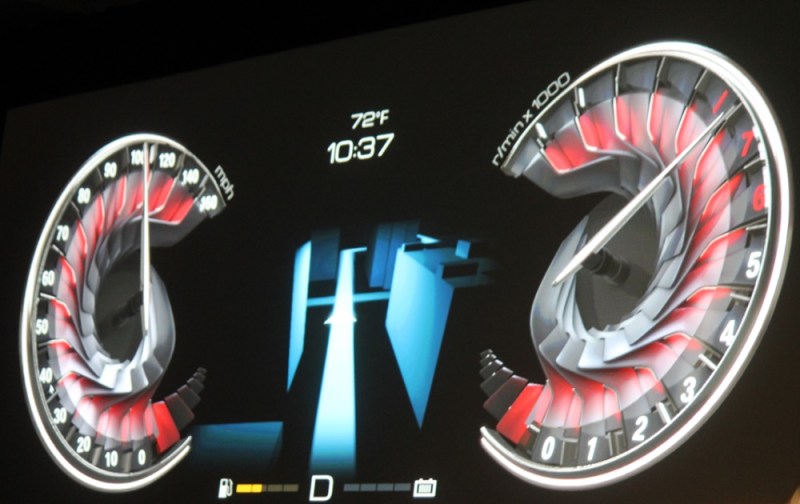