Smart wearables are here, and they’re huge. But most of them just hang on your wrist and count your steps.

That’s about to change, as your clothing gets smart — and starts talking. 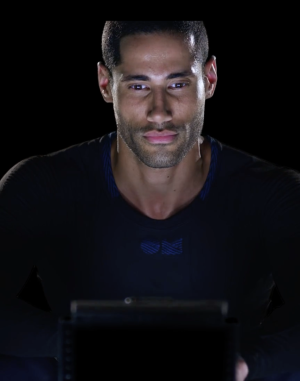 Above: The OMsignal long-sleeved t-shirt. Buff body not included.

Montréal-based OMsignal is launching today with four smart bio-sensing T-shirts that track your heart rate, breathing volume, breathing rate, movement (yes, including steps, but not limited to that), the intensity of your movement, and the number of calories you’ve burned. All tested by the best athletes in the world, according to CEO Stephane Marceau.

“We spent time training with Olympians wearing our shirts,” he told me last week with a grin. “They’re on our fitness advisory board, and they kick our ass at the gym.”

OMsignal has been in private beta since October of last year, when Marceau told me about the company’s vision to help people become not only more fit but also more well. Physical as well as emotional, in other words.

Today for the first time, the fruit of their labor is available for purchase.

Instead of launching with just one shirt, Marceau chose to launch with four: an undershirt, a sleeveless shirt, a casual T-shirt, and a long-sleeved shirt. All can be either worn at the gym, under everyday clothing, or alone. They’re all made at a manufacturer that also makes NFL uniforms and UFC fighters’ gear, and include sensors to measure your movement and your intensity.”

“We use a silver-based thread, integrated into the shirt, that reads your heartbeat,” Marceau says. “It reads the electrical current, brings it to our little black box, then sends it via Bluetooth to your phone.” 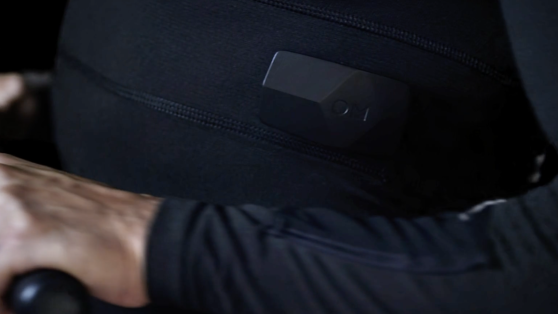 Above: OMsignal’s sensor box, which can be moved from shirt to shirt.

That little box, about the size of a credit card, reads all the data and includes a little Bluetooth radio. It slips in and out of each shirt, so you can change your shirt but continue monitoring and recording. It also includes a magnetometer, gyrometer, and accelerometer that records your movements and steps. You read all the data, and get alerts and suggestions, via the companion smartphone app.

The company is currently focused on fitness fanatics.

“The interest we’ve gotten has been from quantified selfers, people with medical situations, and people who want to connect with themselves,” Marceau told me. “But the market that is most ready and hungry for this is the performance market … the weekend warriors. They don’t need to be super-athletes, but they care about fitness.” 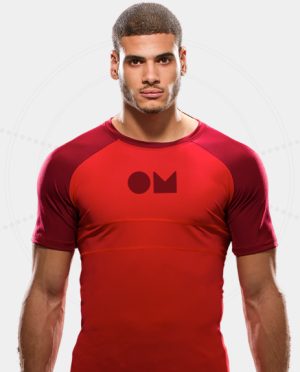 Above: Another buff dude, this one in the short-sleeved shirt.

I’ve worn a Fitbit, Jawbone Up, and BodyMedia strap, and my chief complaint is that steps, while an easy measurement, are not an adequate measure of exercise. The Fitbit and the Up, for instance, have no clue about how much work you’re doing in the weight room. And while the BodyMedia knows your heart rate is up and your skin conductivity is increasing because you’re sweating, it isn’t too clear on whether you’re doing squats or bench press. In fact, all three devices have very little clue what to make of an ice hockey game, too, sometimes telling me I haven’t had very much exercise at all while I wring about two pounds of sweat from my equipment.

Theoretically, OMsignal could change all that.

According to the company, the shirt knows not only a lot more about the exercises you’re doing but also about how hard you’re working. It understands compression and movement, it captures your heart rate changes over time, it knows how much stress you’re under, and it knows when you’re reaching exhaustion.

Only if you’re a man, though.

I know OMsignal has worked on a sports-bra version, as well as shirts designed for women, and that some of the company’s 22 employees are women. At the moment, however, the women’s apparel is not yet ready for launch. Marceau said that women’s apparel will be coming in October to December of this year.

I wouldn’t be surprised, however, if more than a few fitness fanatic females take their chances on a men’s shirt, hoping for a decent fit and good results.

I haven’t tried a shirt yet, so it’s hard to know how well the technology works. What I do know is that OMsignal is one of the few startups with a chief medical officer, one who happens to have his PhD in neuroscience. And that designers at the company have resumes that include stints at Nike and other major companies. So I’m hopeful the shirts are as good as they promise to be.

But they won’t come cheap, at least not initially.

One shirt of any style will run you $199, which includes the transferable monitor. Two shirts (with a single monitor) will be a more justifiable $269, and those who want to go all in can order all four styles for $349. Those are launch specials, and all numbers will jump in June. But over time, as the company achieves economies of scale, the costs and prices should go down.