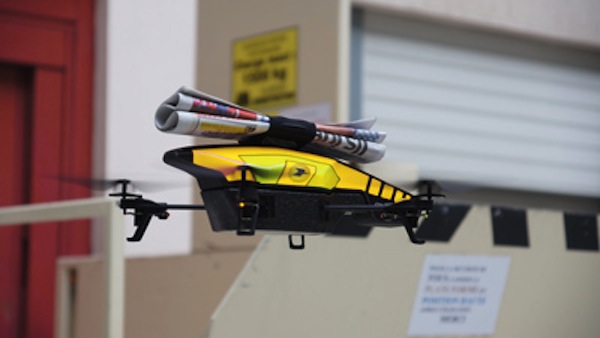 [Update: This story did indeed turn out to be a hoax, which duped a number of publications as the blog posts were published three days prior to April Fools. Parrot declined to comment on requests for clarification.]

Residents of Auvergne, a province in south central France, may soon receive their daily paper by drone.

According to a blog post published yesterday, local postal service La Poste Groupe has been working for several years to modernize its delivery processes. A plan has been hatched to implement paper delivery by drone in early May with the help of local volunteers, and tests are already underway. 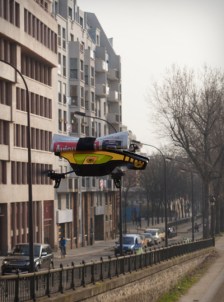 The drone is a quadricopter, which can be controlled by iPod touch, iPhone, iPad and Android devices, and costs over $300. It is manufactured by Parrot.com, a French wireless devices maker that also announced a partnership with La Poste this morning.

We have not heard back from Parrot.com after reaching out for comment. It’s not quite April Fools — but there are legal issues to consider with this insane (but awesome) idea.

French Internet personalities say they will national attention to the crazy experiment, including Olivier Bernasson, founder and CEO of online store Pecheur.com.

Unmanned aerial vehicles (UAVs) are increasingly used in private markets — not just in covert government operations. In 2010, the Wall Street Journal reported that drones would prove useful for nonmilitary tasks, such as wildlife-tracking or emergency rescue efforts.

The primary impediments were a short battery life and flight time — often 30 minutes or less.

Today, thousands of amateur drone hobbyists are sharing ideas on websites like DIYdrones.com. And as the technology evolves, the FAA is working with private industry to relax guidelines for personal drones by the end of this year.

So someday soon you might receive your daily paper from a silent, miniature object from above. Let’s just hope it doesn’t drop on an unsuspecting person’s head!