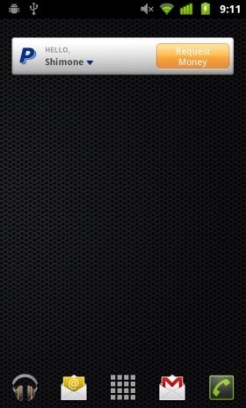 If you’re one of the lucky few with an NFC (near-field communications) capable Android phone, PayPal’s updated Android app will finally give you a reason to give NFC transfers a spin.

Version 3.0 of PayPal’s Android app, released today, delivers NFC peer-to-peer transfers to all NFC-equipped Android phones, which at this point includes the Nexus S and Samsung Galaxy S II (though the latter’s NFC capabilities are still dormant, for some strange reason).

PayPal’s NFC money transfer feature was first announced at our MobileBeat 2011 conference in July, where it was demoed running on two Nexus S phones.

To use the feature, you and a friend have to add the new PayPal Request Money widget, which comes with the new app, to your Android home screens. From there, you type in a specific amount of money and tap your phones together. Your friend will instantly receive a notification about the transfer, at which point they just need to enter their PayPal password to finalize the transaction.

PayPal has had similar functionality in the past thanks to integration with Bump’s wireless transfer technology, but the NFC integration should be even more secure and smoother (Bump often has trouble registering when phones are near each other).

The company says it’s using NFC P2P mode with the feature, which allows for quick transfers between devices. PayPal has also added other new features its Android apps, including a refined interface and address book auto-completion when sending money.