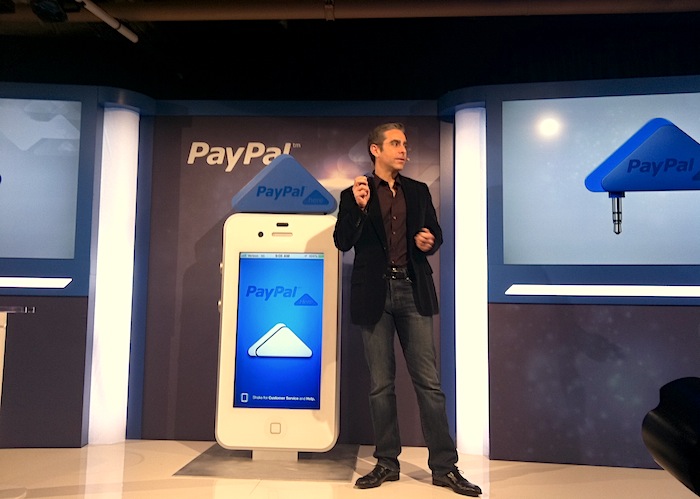 PayPal is officially a direct competitor with Square. The payments company announced a new, triangular dongle today, which will process mobile payments for small businesses internationally.

“One, this product is better…Two, this product will be backed by PayPal, which means it will go global fast…Three, PayPal can now offer merchants…everything they need to compete in this new commerce environment, online, mobile and now offline,” said eBay chief executive John Donahoe at a press conference in San Francisco.

The dongle is called PayPal Here, and it takes a jab at Square with its triangular shape. Vice president of mobile David Marcus presented the device and first called out its design. PayPal made a point to avoid instability in the audio jack itself, so the triangle comes with a brace. We asked Marcus if the triangular shape, which PayPal is calling the “arrow,” is a passive aggressive message to Square, to which he laughed and said it was just a design choice. But why not another square or a rectangle like Intuit’s GoPayment?

“Rectangles are boring, you don’t make a design statement with a rectangle,” he said in the interview with VentureBeat. “We are big believers of the wallet in the cloud and the arrow points the cloud.”

The Square has already become such a well-known symbol that during a video segment, even the eBay CEO accidentally referred to the “arrow” as a “square.” He quickly corrected himself.

The app is what really matters, however. It’s fairly similar in design to Square. It allows small business owners to show the customer the total, as well as sign for the purchase using a finger. It also shows the store’s inventory for what it hopes will be a speedy checkout process. 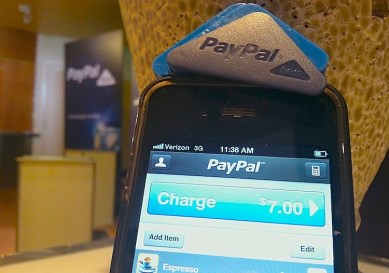 The real differentiation is the ability to take checks. If a small business owner forgets the card dongle, or even loses it, the application comes with a scan card feature. This feature goes beyond the credit card, to allow people to scan checks. It will also track cash purchases and send electronic invoices to your customer.

Small businesses and one-person companies have thus far flocked to Square, which launched in 2010. It is already processing $4 billion in transactions each year, and it takes 2.75 percent for transaction fees.

PayPal also announced updates to its application today, with a product called “local” — a direct competitor to Square’s “Card Case” app. After you put your financial information in the app, you can let merchants know when you’re headed their way. The merchant’s application will ping her that you’re coming and let her know when you arrive using a geo-fence (a virtual perimeter around a real-world location).

Being such a major player, PayPal can easily pour money and energy into its efforts to take on Square, but the company is also beset with issues of its own. Complaints about poor customer service and a clunky online user interface have allowed smaller companies like Square to swoop in on what was an untouched area of the payments market. Marcus explained that PayPal has heard these criticisms and is attempting to renew its design focus.

As VentureBeat contributor Rocky Agrawal points out, however, PayPal has a lot of potential to woo businesses. It is an international company, and can use its reach to gain worldwide popularity. Indeed, PayPal already has 17 million users using its mobile application. As of today, PayPal Here is available in the U.S., Canada, Australia and Hong Kong. Marcus believes that this will be a big factor in PayPal’s success, as it gives the company the opportunity to move farther than its competitors.

It’s obvious that PayPal didn’t want to be left out of the offline payments game, particularly since it launched its offline program in Home Depot stores. The true test will be if the application can hold up in real world scenarios and continue to be a smooth experience.