In the global race to create smartphones and computers, Qualcomm has established itself as a leading developer and supplier of next-generation chips — a position it’s expanding upon today with a new Premium Tier system-on-chip solution, the Snapdragon 855. The company says that the new platform will be the first to commercialize 5G networks with actual hardware, though 5G will notably be an option rather than a mandatory part of this chip.

Some of the new Snapdragon’s features were leaked under both “855” and “8150” names, but as noted yesterday, Qualcomm has settled on the 855 designation. In addition to confirming that the 855 will be a 7-nanometer chip with a separate, optional 5G modem, today’s official announcement discusses a huge collection of features that weren’t addressed in earlier rumors.

4G, Bluetooth 5, and Wi-Fi 6 are standard. The Snapdragon 855’s overall wireless theme is “multi-gigabit connectivity.” By default, the chip will include Qualcomm’s X24 LTE modem, making this the first mobile platform with up to 2Gbps cellular speeds — performance that around 90 percent of mobile carriers will be able to achieve. It will also include Bluetooth 5.0 support with up to 2Mbps speeds, as well as dual-frequency GNSS location support.

Snapdragon 855 will also be the first with integrated Wi-Fi 6 (aka 802.11ax) support for the next generation of wireless routers. Compared with current Wi-Fi devices, Qualcomm says that Wi-Fi 6 will offer up to two times better service efficiency, up to 67 percent better battery efficiency, and WPA3 security. The Snapdragon 855 will also support 802.11ac Wave 2 for superior performance on pre-802.11ax networks. 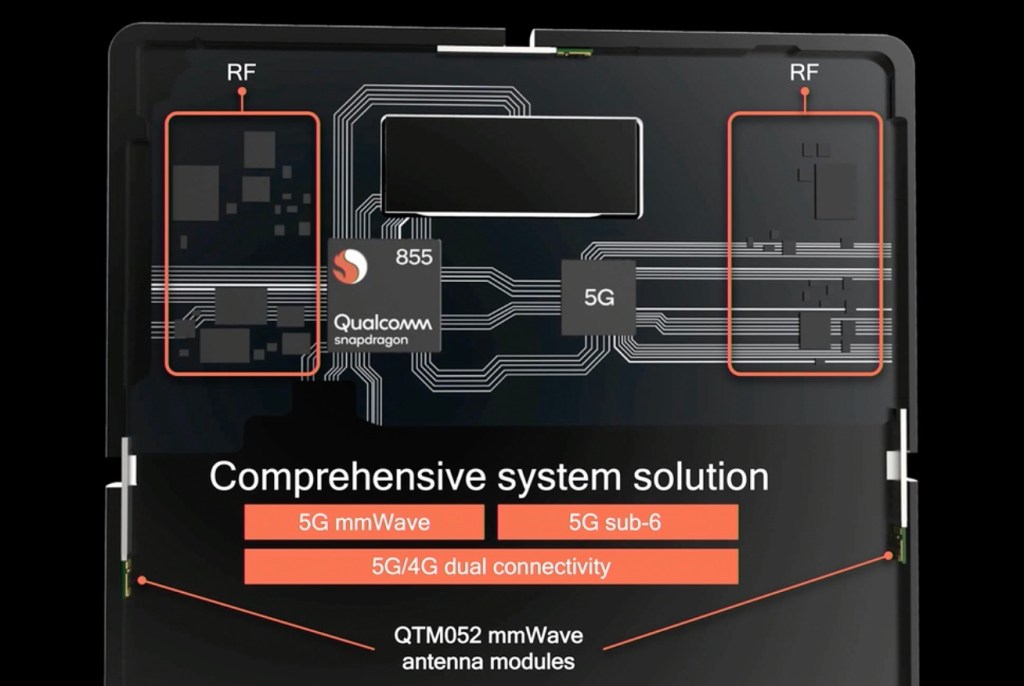 5G and 60GHz WiGig support are optional. OEMs will optionally be able to include a 5G modem with support for both sub-6GHz and millimeter wave (mmWave) bands, the latter promising up to 20 times faster cellular performance compared with current mobile devices. Snapdragon 855 also supports 802.11ay 60GHz WiGig, which Qualcomm is calling “mmWave Wi-Fi,” with up to 10Gbps speeds and “wire-equivalent latency.”

Collectively, these optional features could enable the Snapdragon 855 to power ultra-high bandwidth VR and AR experiences, including volumetric video. The low latency also enables instantaneous collaboration between multiple users linked through the cloud.

Snapdragon 855 is based on the Kryo 485 CPU. Promising 45 percent faster performance than the Snapdragon 845 — the largest jump in a single Qualcomm generation — the latest Kryo is again 64-bit ARM Cortex-based, now featuring a prime core with up to 2.84GHz speeds, three performance cores at 2.42GHz, and four efficiency cores at 1.8GHz.

Without naming 7-nanometer chip competitors, Qualcomm claims that the 855 outperforms them across a range of the most popular apps, as well as during extended use on continuously demanding tasks. Kryo 485 also includes new AI-specific operations for enhanced AI functionality, and works with 2.1GHz LPDDR4x memory. 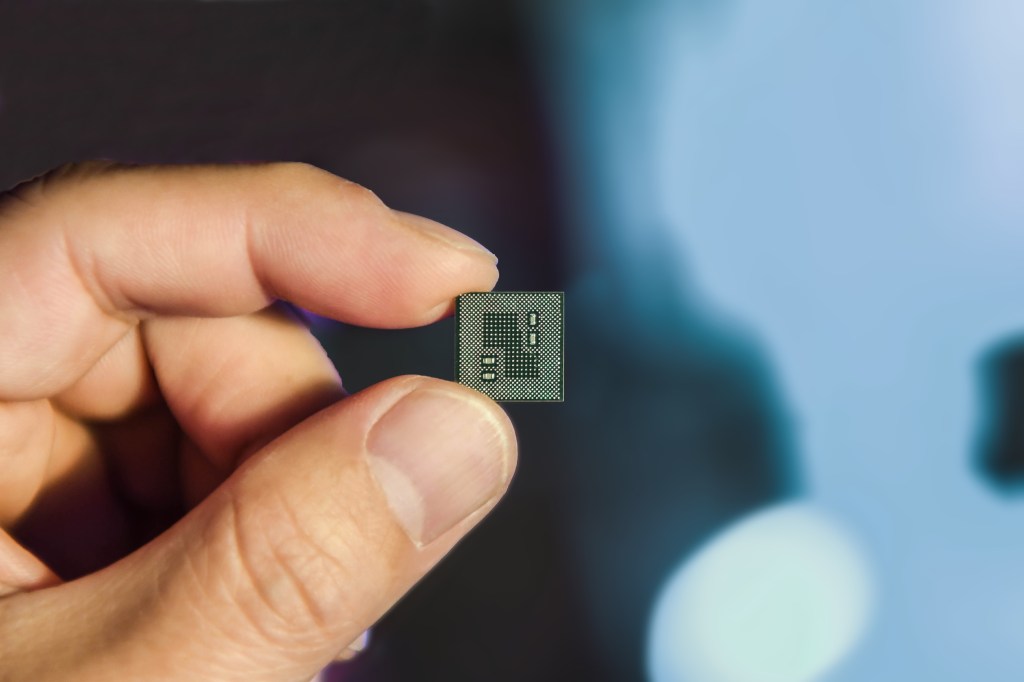 The Snapdragon 855 will support up to 48-megapixel resolutions at 30FPS for a single camera, with 22-megapixel support for twin cameras at 30FPS. It will also be able to process camera data to support 6 degree of freedom motion tracking for VR and AR headsets.

Expect cinema-quality video recording and playback. Thanks to hardware acceleration for H.265 and VP9, the Snapdragon 855 will be up to seven times more power efficient when playing video, while becoming the first mobile platform to support HDR10+, 120fps 4K, and 8K 360-degree VR/XR video. Video recording will consume 30 percent less power while generating higher-quality results, and cinemagraphs, where an unmoving part of an video is frozen while the rest is moving, will also be supported in hardware.

Snapdragon 855 will support “Snapdragon Elite Gaming,” including HDR. The Adreno 640 processor will include a 20 percent increase in performance over the Snapdragon 845, and promises to deliver the “best sustained performance” for gaming: Qualcomm claims that unnamed 7-nanometer competitors fall off in performance after several minutes.

The Adreno 640 will enable the first true HDR gaming on mobile devices, with support for up to a billion shades of color. Vulkan 1.1 is supported, and working with Unity 4, developers will be able to use physically based rendering (PBR, shown above) to replicate the way light reflects off of real world, periodic table-based materials, as well as cinematic post processing effects.

Interestingly, Qualcomm is also saying that the 855 will include custom algorithms that are designed to reduce dropped frames by over 90 percent, as well as various latency-reducing wireless technologies. The result should be much smoother VR and AR gaming, as well as AR and XR app support. 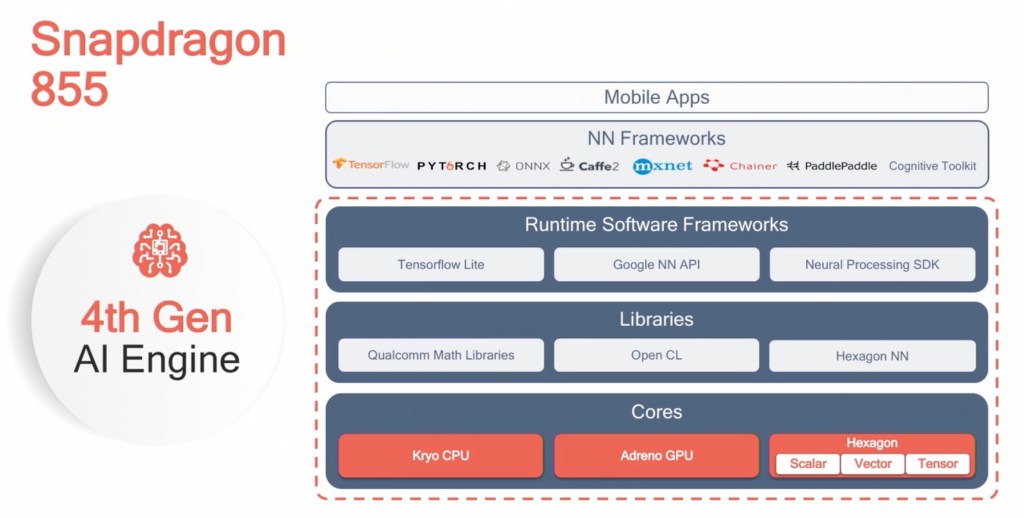 Fourth-generation AI engine will accelerate the accelerators. Unlike competitors that have recently devoted processor blocks specifically to AI, Qualcomm is diffusing its AI capabilities across multiple processing cores — but delivering a total capacity of 7 trillion operations per second. The Snapdragon 855 enables each AI task to be placed on a core that makes sense for its needs — high performance, high or low complexity, or low power consumption. 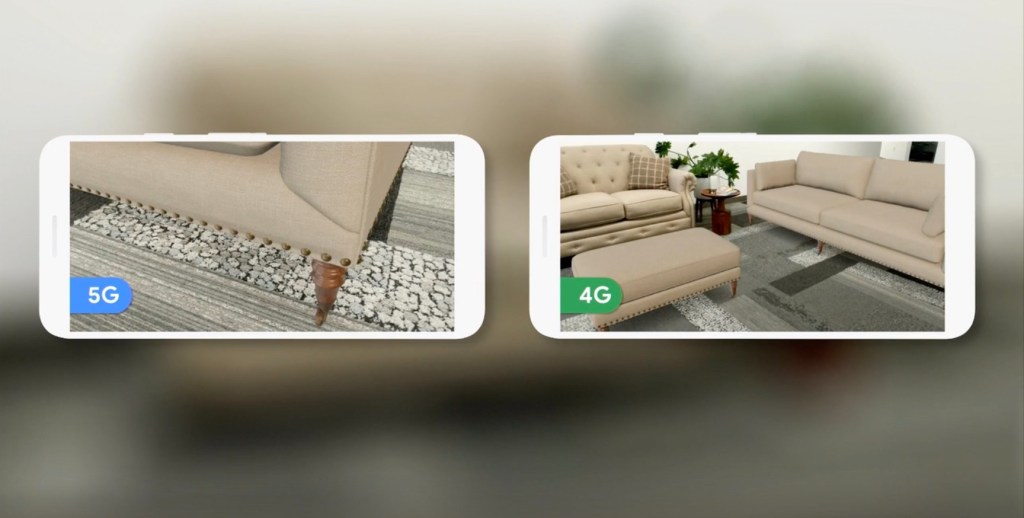 The company offered several examples of how the improved AI feature will work in practice. Representatives of Google’s augmented reality team said that they worked with Qualcomm to bring on-cloud computer vision algorithms to the Snapdragon 855’s AI engine, enabling on-device text recognition without need to send data to the internet. Using 5G, Google says that the Snapdragon 855’s AI will be able to perform “AR autocompletion” (above), quickly downloading and correctly placing AR assets into physical spaces.

Qualcomm also demonstrated a single-microphone ambient noise reduction feature that appeared to dramatically improve perceived voice quality, and video color processing that will let users preview changes to their hair color in realtime. In a collaboration with Sensetime, Qualcomm says that it will offer a secure time of flight 3D face scanning feature that can provide bank-quality secure identity authentication.

The Snapdragon 855 Mobile Platform is already sampling to customers and will begin to ship in commercial devices during the first half of 2019. It is expected to be used in smartphones, tablets, and computers from at least 18 device makers throughout the next year, with OnePlus claiming that it will be the first to release a Snapdragon 855 smartphone — its flagship device for 2019.