Backed by early 5G networks in the United States and South Korea, the first 5G devices are already in customers’ homes and hands — home routers and hotspots powered by Qualcomm’s first-generation 5G modem, the Snapdragon X50. With roughly 30 devices slated to use the X50 this year, Qualcomm today announced its sequel, Snapdragon X55, to kick off a “second wave” of faster, slimmer, and more capable 5G products around the end of 2019.

When Qualcomm announced Snapdragon X50 back in 2017, 5G was still theoretical — standards weren’t finalized, pocket-sized devices hadn’t been tested, and regulators didn’t know which radio frequencies they would allocate to the cellular services. Since then, all of those pieces have fallen substantially into place, revealing a need for smaller and more power-efficient chips, as well as broad support for lots of different radio frequencies.

Snapdragon X55 addresses those issues. Unlike the X50, which required a separate LTE modem, the X55 uses a single chip to support every cellular generation from 2G through 5G, as well as “virtually any” radio frequency in “any region” of the world. It uses the latest 7-nanometer manufacturing process, shrinking from 10-nanometer scale, which combined with other component improvements will cut energy consumption, allowing second-wave 5G devices to have smaller batteries.

The X55 will also be noticeably faster than its predecessor. In 5G mode, it offers a top download speed of 7Gbps, up from the X50’s roughly 5Gbps peak, plus a 3Gbps top upload speed. When on 4G networks, it can download at up to 2.5Gbps, which is 25 percent faster than the company’s standalone X24 LTE modem. In addition to supporting both millimeter wave and sub-6GHz frequencies, it can operate in a 5G/4G spectrum-sharing mode so carriers can offer both types of service on the same radio frequencies. 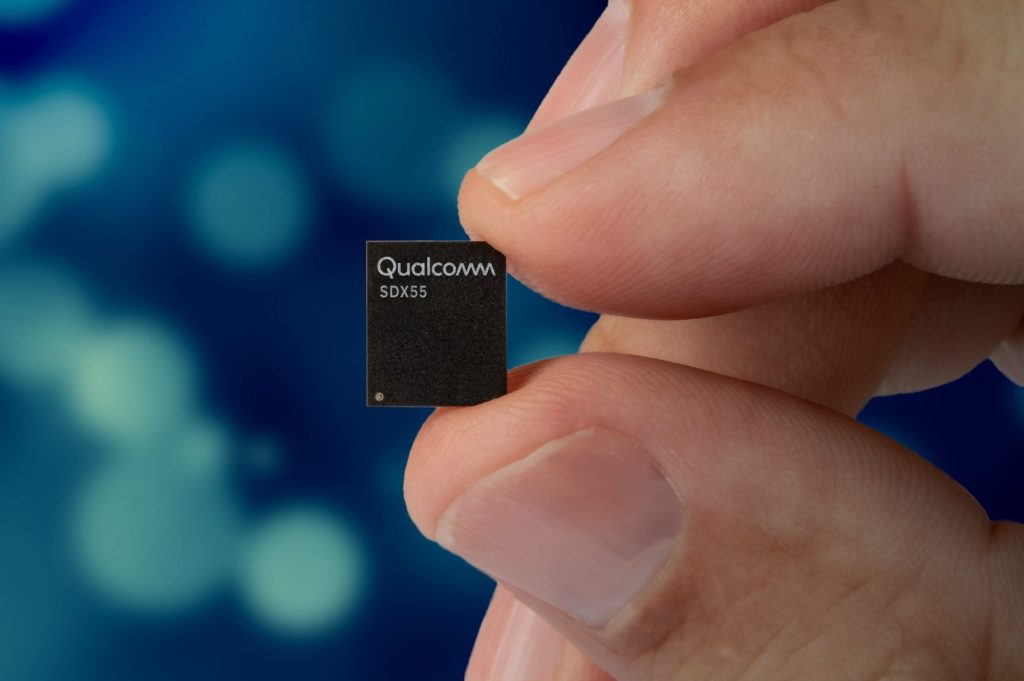 Simultaneously, Qualcomm is rolling out its third-generation 5G antenna, the QTM525, specifically designed to fit inside smartphones thinner than 8mm. QTM525 is millimeter wave-specific, but goes beyond its predecessor by adding 26GHz support to the prior 28GHz and 39GHz bands. That will enable it to work on the fastest 5G networks currently planned for North America, South Korea, Japan, Europe, and Australia — a wide swath of territories.

Two related new components may sound even more obscure, but they’re equally important: the QET6100 5G Envelope Tracker and QAT3555 5G Adaptive Antenna Tuning Solution. In short, the QET6100 enables a 5G device to efficiently use a 100MHz chunk of radio spectrum at once, offering faster speeds and longer battery life, while the QAT3555 lets the device work on radio frequencies all the way from 600MHz to 6GHz, with greater power efficiency and a 25 percent smaller package. They enable the Snapdragon X55 to be the first modem capable of using these new radio features.

Collectively, the new parts will enable the second wave of consumer and enterprise 5G products to “meet the expectations that people have with regards to their smartphones and devices today,” Qualcomm said, which effectively means smaller, faster, and longer-lasting. The company expects that the new parts will be used in everything from phones to hotspots, fixed wireless routers, laptops, tablets, automotive applications, and enterprise devices.

Snapdragon X55 will be shown off from February 25-28 at the Mobile World Congress, alongside numerous 5G demos, including “boundless XR,” an enhanced ultra-reliable low-latency communication (eURLLC) test with 99.9999 percent reliability, and 5G cellular vehicle-to-everything (C-V2X) demos. The new modem is sampling to customers now, with the other components sampling in the first half of 2019. Initial products based on the second wave parts are expected to become available by the end of the year.