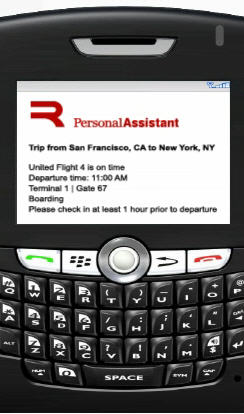 Rearden Commerce, a Silicon Valley company that wants to become your personal concierge everywhere, including on your mobile phone, has raised $100 million in funding from some financial powerhouses.

So far, the company has worked for years on a web-based personal assistant service, which lets you do everything from book travel arrangements to manage your calendar. But the company recently demoed its coming mobile service to VentureBeat. It is preparing for a major offensive in mobile, to be announced at the end of this month.

Investors include JPMorgan Chase, American Express, Oak Investment Partners and Foundation Capital. The latter three has also pumped in an earlier $100 million round. The company is now valued at more than $500 million, according to an anonymous source cited in a separate Dow Jones article (no link).

It comes at a time when there’s a big race on among companies to be able to offer advertisers a compelling mobile platform to reach consumers. Rearden says it can offer advertisers detailed information, about where people are located at any given time, what their travel plans are and all sorts of other information about them.

It is growing quickly. It has 300 employees, and wants to have 500 by the end of this year.

The Foster City, Calif.-based Rearden Commerce was created by Patrick Grady, who has worked on this since 1999, and who was previously an investor.

Notably, it also comes at a time when fast-growing social networks like Facebook are developing more robust mobile versions, which also contain useful applications that might compete with Rearden. However, Rearden says its product is more robust for transactions.

Indeed, the company’s user-friendly personal assistant helps you manage a variety of tasks, including dining, managing your address book and more. But it has focused on business-to-business applications, making sure transactions can be conducted securely. But the company will eventually deliver the Rearden Personal Assistant for consumers. The company also plans to rapidly scale its on-demand platform, to allow new merchants and third-party applications providers to be integrated into its concierge service. A demo of the company’s initial technology is here.

The downside, however, is that its platform isn’t completely open. If you prefer Yelp as a restaurant review service, for example, you can’t sub it instead of Rearden’s default service, Zagat. While the service will open up more going forward, executives aren’t saying when that will happen.

The mobile version isn’t yet public, but the demo we saw shows that the mobile features use some of the cooler features of Yahoo Go, such as the ability to scroll through your services, carousel-like, via a menu on the left-hand side of your phone.

Rearden Commerce has also inked strategic partnerships with American Express and JPMorgan Chase. In the past 18 months, Rearden Commerce has added more than 1,700 new corporate customers representing more than one million contracted users. The customers include Fortune 500 companies such as ConAgra Foods and Thomson as well as small enterprises C-COR, Diagnostic Health, and Symplified Technologies.

It’s worth noting that the company raised the big pile of cash during a weak environment for start-ups to raise venture capital.

The company came out secrecy in 2005. Its Rearden Personal Assistant helps users find and book the range of services they need based on company policies, their personal preferences, location and the context of what they’re doing.

Just like a seasoned executive assistant, the Rearden Personal Assistant automatically inserts details into the user’s calendar and proactively notifies them of schedule changes via phone, email or text message — whether they’re in the office or on the road. Chase said it plans to use the assistants as the basis for a program to manage a new credit-card service for millions of consumers.

The company is not yet profitable but says it has growing revenue streams from some 137,000 merchants that are hoping to gain distribution through the assistant.