Google Glass is for walking around and getting directions to a cafe with perfect espresso. Recon Jet is for kicking your performance into the ultimate high gear and — yes — even saving lives.

The Vancouver, B.C.-based Recon Instruments, which created the first-ever heads-up display for sports in 2010, has launched the Recon Jet for preorders today. It’s essentially a rugged take on Google Glass with perfect balance that does not require Wi-Fi or cellular connections, works in any weather conditions, and provides data-at-a-glance even under the worst viewing conditions. 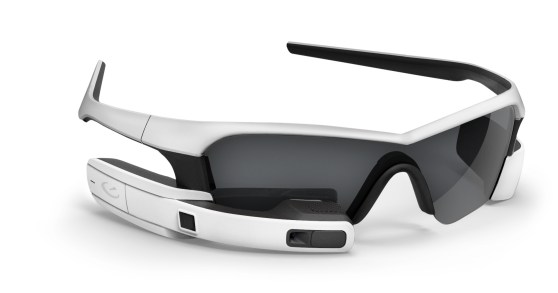 “Recon Jet is an extremely activity-specific device,” company CMO Tom Fowler — a former professional triathlete — told me today. “We do not aspire to be the general purpose device you wear when walking around in daily life but the device you need when you’re engaged in a specific activity at a very high level.”

In other words, Google Glass is consumer. Recon Jet is pro.

The device, which is embedded within a pair of sunglasses, weighs just 28 grams — less than an ounce — and is weighted perfectly with 14 grams to a side. Included in that ounce is a dual-core 1GHz processor, a graphics chip, Wi-Fi, built-in ANT+ for device communications, Bluetooth, GPS, a HD camera, and a raft of sensors: accelerometer, gyroscope, altimeter, magnetometer, and thermometer. And, of course, it has an HD display, infrared gaze detection, a mic, speakers, and a touchpad that Fowler says works even with gloves and even when it’s snowing.

Cyclists like Fowler could use it to monitor performance. Runners and other athletes can access data from their fitness bands, shoe sensors, and body monitors without having to pull out a phone, open an app, and check a screen. And yes, you can get your texts and smartphone notifications as well as call display on Jet. But industry pros can use it as well: engineers, firefighters, builders, and doctors.

And in the hands of doctors, this kind of access to information can save lives.

“I showed this to a U.S. Army doctor who had done a couple of tours in Afghanistan,” Fowler told me. “He said that if he had had Recon Jet in Afghanistan delivering patient vital stats while operating … there are people who would have made it who, sadly, did not. That’s a pretty inspiring mission.”

But there are also some consumer-friendly social features, too.

When you take HD video or pictures with the built-in camera, Fowler says, you can elect to have it automatically upload to your Facebook or other social accounts. So a rider who just finished an inside mountain climb, or a weekend warrior who just completed a 3K run, could share their victories with their friends and community. Then, as people respond, those comments and congratulations will show up on your heads-up display.

What about Google as a competitor?

You’d think that Google would be a nightmare competitor to small company in the face-mounted wearable computing space. Not so. Fowler says he couldn’t be happier that Google launched Glass, because the search, software, and device giant is pumping up massive consumer interest in the market — interest that Recon intends to capitalize on.

But the Jet has a critical component that’s still coming: the open SDK. Recon wants the developer community to build anything and everything on this platform, and it’s already working with health and fitness companies to create apps for devices and data.

Product ordered today will be delivered in December of this year — probably around the same time Google Glass makes it to consumer release — and the SDK will be available “shortly.” Those who are interested should probably try to pick up a pair now — the price goes up to $599 when the product is actually in the market.