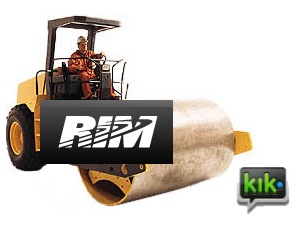 Kik, the hot mobile chat application we wrote about two weeks ago that was seeing explosive growth, has been pulled from the Blackberry app market App World.

RIM, the maker of Blackberry phones, told Kik on Friday afternoon that no new downloads could be made of the app, citing concerns that it “could not elaborate on at the time.” Kik has now been closed for new registrants on Blackberry devices all weekend. The application continues to be available in Apple’s App Store and the Android app market for iPhone and Android device users.

So Kik is being left completely in the dark for now, creating serious uncertainty for the app that was seeing unprecedented growth.

Kik’s chat service is notable for its blazing speed, and intuitive interface. It’s seen a quicker initial uptake than other chat services, such as WhatsApp and PingChat, that also let you message across platforms (iPhone, Android and RIM). Kik says it has hit 2.25 million registered users — an impressive count for an app that has been up all of three weeks. It’s not clear how many of those will remain active, but Kik says about 1 million users have sent a message in the last 48 hours. Until Friday, the users were about evenly distributed across all three platforms.

You’d think that RIM would want to support a service that provides a great chat experience on the Blackberry, so it’s not clear why the company has taken this action. One explanation could be that RIM fears Kik could overtake RIM’s own messaging service, Blackberry Messenger. But such fears wouldn’t make much sense, because RIM doesn’t lose any revenue if users adopt Kik.

RIM has not responded to a request for comment. Ted Livingston, founder of Kik, said RIM hasn’t responded to his requests for timelines for when the issue will be cleared up.

True, Kik has drawn scrutiny for the aggressive way it has pulled contacts into users’ address books, with some people saying it violates Apple’s iOS Developer Terms of Service, because it imports contacts without asking for permission. However, Livingston created a fix for this last week, which he is pushing out today in an update for the iPhone and Android apps. The fix allows users to opt out of the contact-import feature. He’d planned to push the fix to RIM too, but RIM won’t let him. Also, competitor WhatsApp in fact appears to pull a copy of a user’s contacts onto its own servers — making it even more aggressive than Kik on that measure — and yet RIM hasn’t pulled WhatsApp [Update: Actually, there’s some disinformation out there about WhatsApp. The company says its application lets users contact you if they know your phone number, and that your phone number is transmitted via SSL for detection of other WhatsApp contacts, “but they are never stored”]. So it doesn’t appear that privacy concerns are behind RIM’s move. Also, Kik has updated the app so that it is not as much of a drain on battery life as some competitors, so Livingston says this issue has also been taken out of the equation.

Another upstart steamrolled by the big guys? Stay tuned to see how this unfolds.

Update: As pointed out in comments below, another reason for RIM’s action could be that Kik’s traffic has overburdened RIM’s network. That would be embarrassing enough for RIM not to want to comment. But not saying anything may be worse, because it comes across as developer unfriendly, as the other comments below suggest.