Samsung kicked off its Galaxy Unpacked 2019 event at the Bill Graham Civic Auditorium in San Francisco with the biggest news first — its foldable smartphone. Called the Galaxy Fold, the smartphone/tablet hybrid sports dual screens: one that folds in half like a notebook, and another that works just like any other. Samsung says the Galaxy Fold is defining “a new mobile category.”

The roughly 200-gram Galaxy Fold flips open in portrait orientation, and the inside is coated with a film that gives it a photopaper-like appearance. It’s got a protective polymer consisting of a cover window, a shock-absorbent film, and a polarizer that’s 45 percent slimmer than the company’s previous thinnest, along with a flexible layer and backplane. Samsung says the tech — dubbed Infinity Flex Display — took seven years to develop.

Thanks to a highly durable adhesive and a “sophisticated” hinge system with interlocking gears, the Fold’s 7.3-inch QXGA+ Dynamic AMOLED (4.2:3) primary screen can undergo “hundreds of thousands” of flexes without sustaining any sort of damage, Samsung says. The 4.6-inch HD+ Super AMOLED (21:9) cover screen purposefully doesn’t bend — it puts apps at your fingertips when the Fold’s folded in half.

The Fold packs a speaker tuned by AKG Acoustics and a side-mounted fingerprint sensor, and comes in four colors: black, silver, green, and blue. You can personalize the hinge color, too, if you choose.

The Galaxy Fold has a six-sensor camera setup comprising a three-sensor module on the rear and dual front-facing cameras.

On the cover, there’s a 10-megapixel selfie camera with an f/2.2 aperture. And around bakc, there’s a 16-megapixel ultra-wide sensor (with an f/2.2 aperture); a 12-megapixel wide-angle sensor with a variable aperture (f/1.5 and f/2.4), autofocus, and optical image stabilization; and a 12-megapixel telephoto sensor with phase detect autofocus, optical image stabilization, an f/2.4 aperture, and 2x optical zoom.

But wait — there’s more. The Fold’s got a whopping 12GB of LPDDR4x RAM, 512GB of onboard memory, and Universal Flash Storage 3.0 (eUFS). And there’s two batteries in two — one on each side of the Fold’s bifurcated body — that total between 4,275mAh and 4,380mah in capacity. (They’re compatible with wireless charging standards PMA and WPC, plus rapid charging technologies Samsung Quick Charge 2.0 and AFC.)

As for the system-on-chip at the heart of the Fold, Samsung’s not saying outright — it announced onstage that the Fold will feature a 7-nanometer 64-bit processor. That rules out Samsung’s own Exynos 9820 — it’s 8-nanometer — but not the Qualcomm Snapdragon 855, which fits all of those criteria.

As for Qualcomm’s Snapdragon 855, it’s a 7-nanometer eight-core chip that, like the Exynos 9820, can achieve up to 2Gbps cellular speeds courtesy the embedded X24 LTE modem. It supports Wi-Fi 6 (aka 802.11ax) along with 802.11ac Wave 2 for superior performance on pre-802.11ax networks, and it’s up to 45 percent faster overall thanks to a 64-bit ARM Cortex design based on Qualcomm’s in-house Kryo 485 processor.

Meanwhile, the Snapdragon 855’s graphics chip — the Adreno 640 — is 20 percent faster than the Snapdragon 845’s Adreno 630, and it supports HDR (along with APIs like Vulkan 1.1) and custom algorithms designed to reduce dropped frames by over 90 percent. Additionally, it enables developers to use physically based rendering (PBR) to replicate the way light reflects off of real-world materials.

Like the newly announced Galaxy S10 series, the Galaxy Fold runs One UI, Samsung’s redesigned overlay atop Android Pie, which recently began rolling out to the Galaxy Note9 and S9 series phones in the U.S. 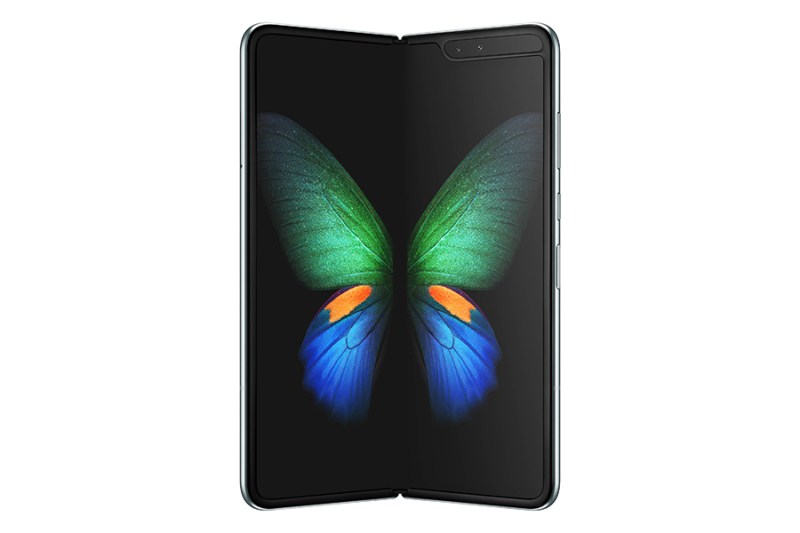 In addition to font tweaks and redesigned navigation buttons, the UI is much more intuitive than previous versions of the company’s mobile flows, not to mention more responsive. The upper portion of the screen is reserved for viewable content, while the lower portion is devoted to interactions. Focus Blocks — bright, colorful buttons that stand out against dark backgrounds — make clear just which elements are interactive, while pop-ups, which previously appeared near the middle of the screen, now populate the bottom where they’re easier to reach.

Icons in One UI have been “radically” simplified to help users “easily understand what each one is,” according to Samsung, and their colors — along with the hues of each menu — have been fine-tuned to provide a “more comfortable experience.”

In other improvements, the One UI settings menu groups related functions together, and it’s been reordered so that the most important options appear first, near the top. The new dialer app’s UI is dynamic — when you’re dialing a number, the look changes accordingly, concealing the search bar and menu tabs. And in the clock app, it’s now easier to switch between tabs devoted to functions like stopwatch and timer.

Samsung says it worked with Google to optimize Android for the phone’s foldable screen. And to shore up early software support for the form factor, it made available an emulator that allows developers to test things like how apps change when they transition from a “folded” to an “unfolded” state. It also is working closely with a select group of partners — among them Flipboard, Microsoft Office, and YouTube — to build bespoke experiences for the Galaxy Fold. 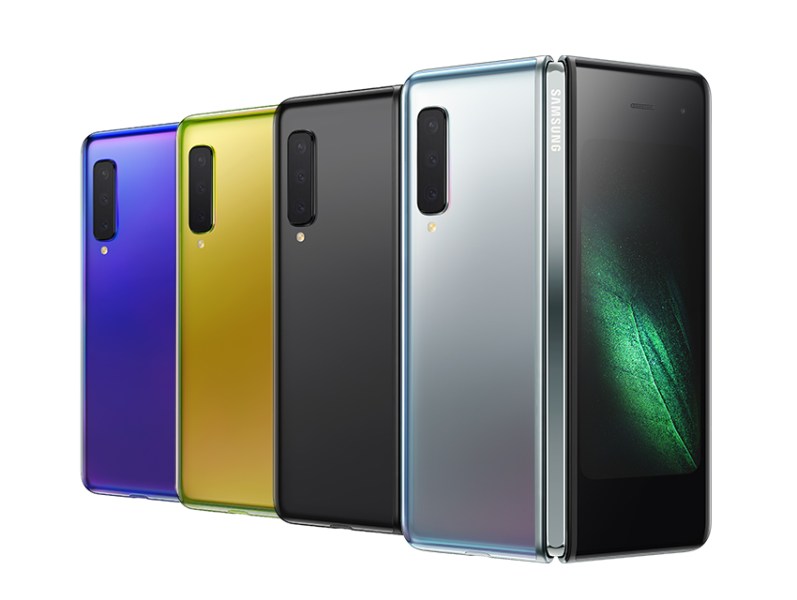 Unfurled, the Galaxy Fold behaves not unlike a tablet, with enhanced multitasking features — including Multi-Active Window, which lets you run up to three apps simultaneously, and App Continuity, which seamlessly transitions apps from the smaller display to the larger display and vice versa — that take advantage of the added real estate. If you’re looking at Google Maps, for example, the top-down view will expand to show a larger area on the 7.3-inch screen.