That very well could be the motto of San Francisco-based Sense6 Design, a producer of smart jewelry like necklaces and pendants whose built-in technology allows users to contact authorities in the event of trouble. The line of jewelry is called Artemis, and it will be released to the public Nov. 2.

To be sure, fashionable jewelry that can also potentially save your life is yet another interesting advance in the wearable arena. The Artemis line includes slick-looking pendants and necklaces, and the prototypes have been field-tested in San Francisco since February. The devices use low-energy Bluetooth technology synched to your cell phone.

“We have all the electronics and jewelry design done,” said Jeff Axup, Sense6 founder and chief executive. 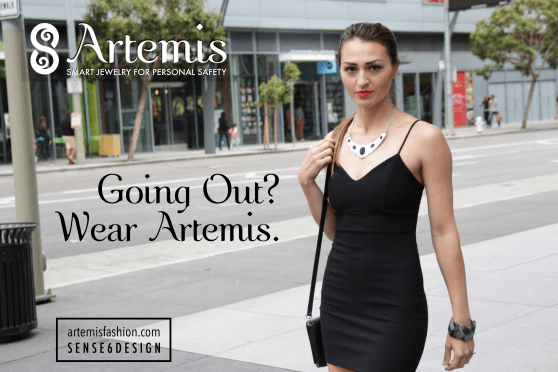 Saying the 911 emergency grid is obsolete, Axup and his small crew have instead opted to contract with private security agencies. When a user walking down a darkened city street, for example, triggers an alert, it first goes to the security service while also simultaneously transmitting your GPS coordinates.

The jewelry also contacts family members or trusted friends via text message that an incident has occurred. The device contains a microphone which records audio of the incident in its entirety for possible evidence, say, if the perpetrators are arrested. Axup declined to say what security agencies they were using.

Axup is entering the wearables field at an opportune time. That’s because analysts predict the wearables market to be a $6 billion industry by 2016. Read a marketing report on that here.

Axup emphasized that calls directed to a security agency rather than a 911 operator are far more effective because each wearer has a digital profile on hand, so the operator knows immediately who you are. Dispatchers also possess the desk phones of police, fire, and emergency agencies that cover the immediate vicinity where the caller is hailing from.

“The police take these calls more seriously than if you just call 911,” Axup said.

“When you ask for help the call goes directly to a dispatcher who is paying attention to you. Our smart jewelry uses our proprietary data to define what is wrong and what you need.”

Interestingly, Axup and his team recruited beta testers for the devices through their website and the young CEO said the response was overwhelming. Saying the prototypes were tested in a “realistic environment,” Axup sees a future where women wearing his smart jewelry becomes commonplace.

Sense6 Design bootstrapped the prototypes but will officially roll out its Indiegogo campaign in a bid to raise $200,000 to build more jewelry. Preorders will be available through their Indiegogo page Oct. 28, and the jewelry line officially goes live November 2.

Axup declined to release a price listing but said his smart pendants and necklaces are affordable for the average consumer.

“We’re also looking at a range of products for the future that will give the wearer super powers,” Axup said.