Slack doesn’t appear to be showing any signs of slowing down when it comes to new users. In January, the team chat app announced it had more than 5 million daily active users and more than 1.5 million paying customers. Faced with a growing number of competitors and seeking to prove doubters wrong, Slack is releasing another feature to help its users better connect with apps they need at work.

It’s been more than a year since the introduction of a third-party app directory, and the number of apps that are now available has grown more than 500 percent to at least 900. Slack said that 90 percent of its paid teams are actively using at least one app. “We’re really happy with the app directory. It’s a strong ecosystem, and we’re really proud of it,” said Ceci Stallsmith, the company’s head of platform marketing.

Over the years, Slack has launched new features to encourage app integrations, including message buttons, threaded replies, and more. Now the company has introduced Message menus, a feature developers can use when dealing with dynamic data in channel messages.

“Slack is your communication platform where software is embedded into the conversations,” Stallsmith explained. “We have a suite of different features on our platform. Before we had the slash command … bot users … and message buttons. Message menus are the next step of that functionality.”

Message menus are drop-down menus that developers can incorporate into their Slack apps. Not everything can be responded to with a couple of buttons, but when you’re dealing with information pulled from a database, a drop-down menu may be best. One example is if you’re connecting Slack with a customer relationship management tool like Salesforce, you could incorporate a Message menu to show relevant accounts to the user. This added feature is geared towards scenarios that require more nuanced decision-making and not a binary response.

Above: Example of SurveyMonkey using Message menus in Slack.

There are five different types of menus that developers can use: static menus, which present a set of fixed choices; user menus, which show the members of the Slack team; channel menus, which provide public channels; conversation menus, which list all the channels (public and private) and direct messages; and live menus, which load dynamically based on a server’s response.

“[Message] menus points to the fact that we see the conversation you’re having in Slack at the heart of what you’re trying to do. We’re adding functionality that allows developers to use the message as a canvas,” Stallsmith said. 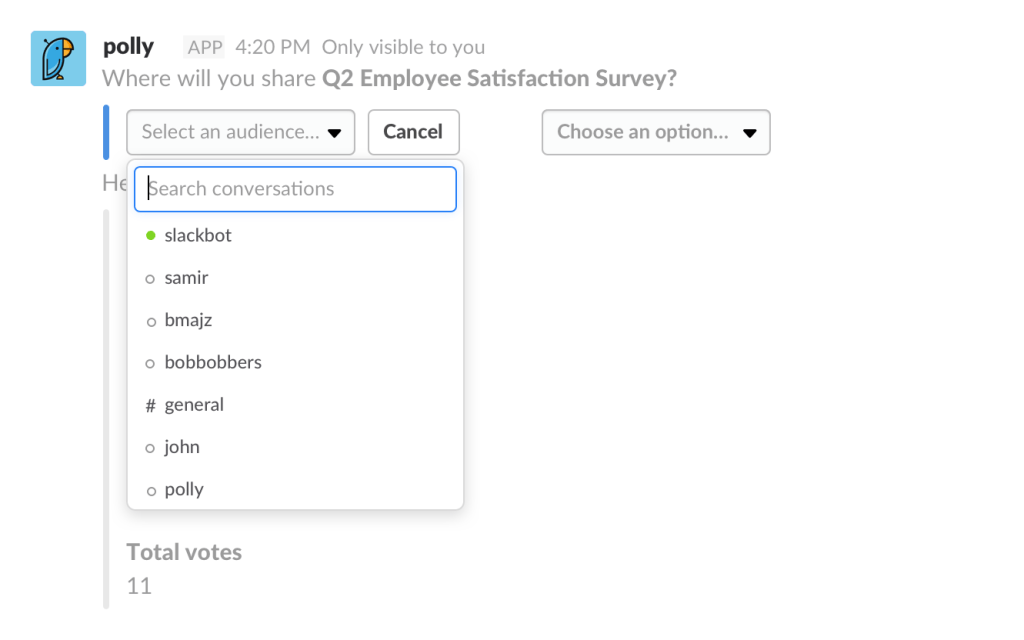 Above: Example of Polly using Message menus in Slack.

Slack is adding more options for developers, based on how complex workflows can be for customers. For early teams, those from startups and smaller groups, having simple interface controls such as slash commands and buttons may be enough, but as Slack goes up-market towards the enterprise, it’ll need to arm developers with additional capabilities so larger teams won’t feel constrained by the capabilities.

The addition of Message menus marks another milestone in Slack’s developer platform roadmap, which it has publicly shared through a Trello board. It’s the next phase of interactivity the company wanted to bring to messages. In the near future, developers will be able to incorporate text input interactivity into their apps.

Updated as of 10:33 a.m. Pacific: Corrected headline to remove the 5 million daily active users — this was previously announced in January.