Speak Music has launched an iOS app called Melody, which lets you play music using voice commands and stream tunes through your phone or Bluetooth-enabled speaker. Available for free, it lets you broadcast music stored locally or pull from YouTube, iHeartRadio, or Spotify (if you have a premium subscription). The company said that additional sources will be supported later this year.

“Finding and playing music on your phone while engaging in other activities, such as driving, sports, or many other activities is difficult and disruptive,” a spokesperson told VentureBeat. “We created a platform that allows users to simply speak what they want to hear and it plays, instantly.”

Within Melody, first connect any of the supported music services. Then tap the microphone in the app and give it a voice command — such as requesting a particular artist, song, album, genre, or mood. You can say, “Shuffle my happy playlist,” “Play some Sia,” “Play the news,” “Play Los Angeles rock radio,” or just “Play some good music.” To have music play on a third-party speaker, you’ll have to first pair your phone with the speaker and then select the device through your iPhone. You’d use the same process if you wanted to sync it with your Apple TV. 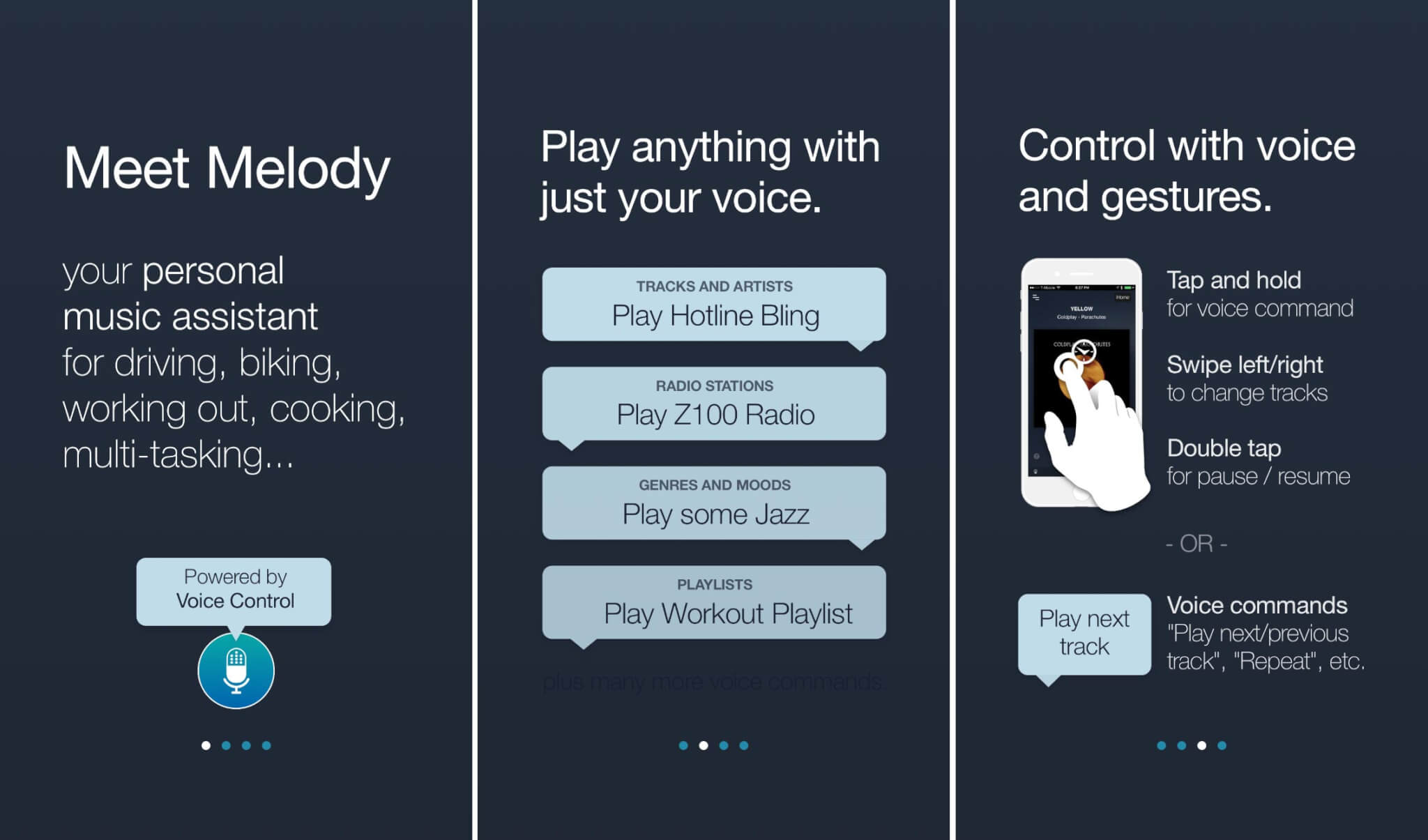 Above: Speak Music’s onboard process for Melody

Melody came out of Speak Music’s acquisition of the Joy music assistant service. The idea was to create a product capable of supporting multiple streaming services. Speak Music bills Melody as “a platform that comes as a consumer app, as well as is licensing its technology to consumer electronics manufacturers to build and create intelligent headphones and Bluetooth speakers that allow access to multiple streaming services through voice control.”

You could think of Melody as similar to Siri, but specifically tailored to music and with a few notable omissions. First, the app needs to be open and you have to press the microphone button in order for it to activate. It won’t search for things beyond what’s in your music library and connected services, and you can’t ask it when the next Sia or Katy Perry concert near you will be. Another limitation is the somewhat clunky experience when streaming music from your phone to third-party speakers, headphones, or even your car — if there was an easier way, it would be great. 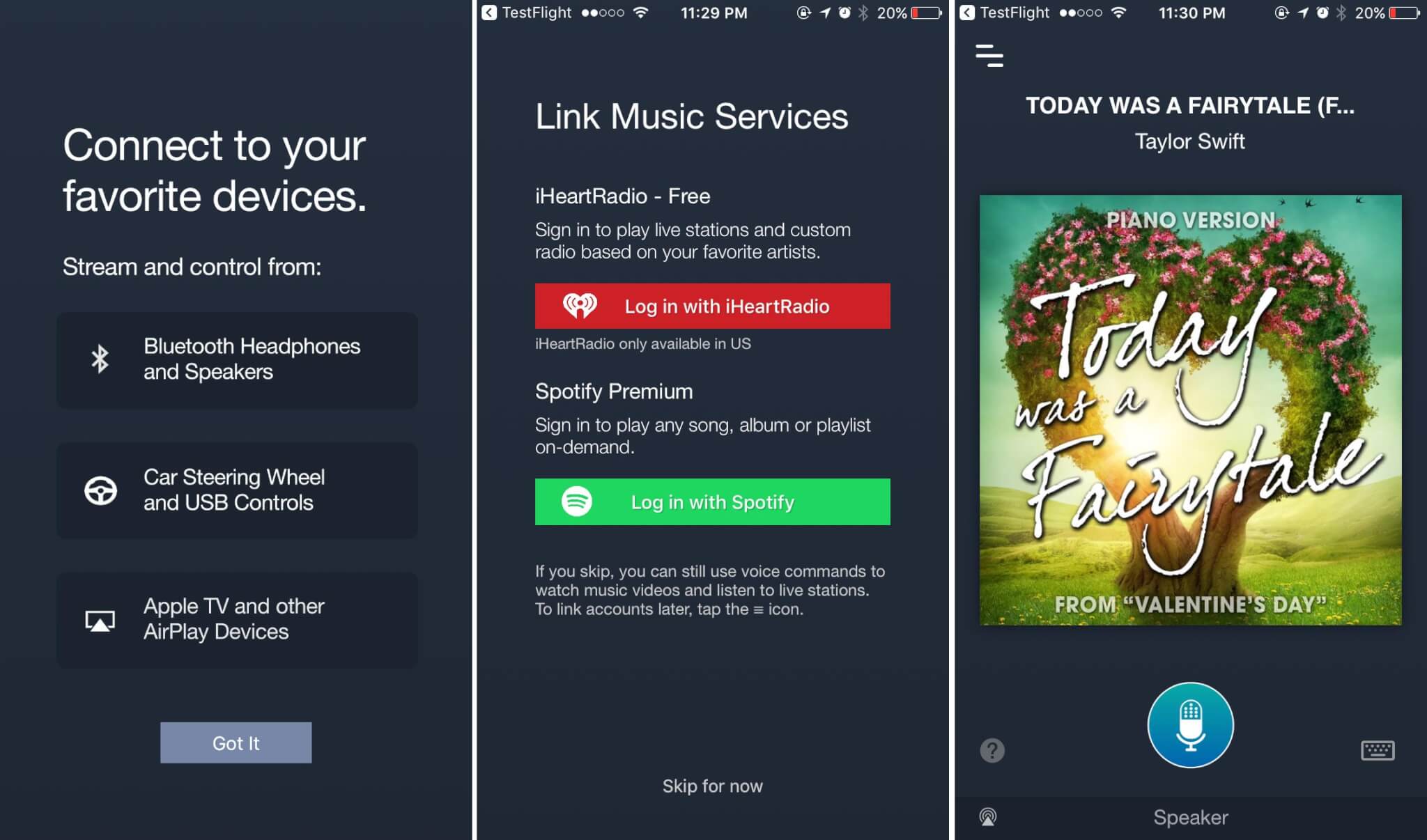 The company defended the launch of a mobile app, explaining that the “majority of people” consume music through smartphones primarily, but “most of us are engaging in other activity while listening to music, whether that is working out, studying, or driving. In fact, 75 percent of millennials consume music from their mobile phones while also engaged in other activities.” The company also acknowledged the limitations of the mobile device — its small screen and the potential for it to be distracting — but believes its voice-activated solution alleviates these problems:

“Finding and playing music on your phone while engaging in other activities […] is difficult and disruptive. We created a platform that allows users to simply speak what they want to hear and it plays, instantly.”

Like many apps and products in the marketplace today, Melody leverages artificial intelligence. Speak Music shared that “Melody is also a ‘personal’ assistant — it learns from your voice commands and context to give you the best results. You can teach Melody by saying ‘Learn my shower song’ or have it play music you’ll like by saying ‘Play some good music’.”

And Speak Music sees Melody as also being a platform, integrated within hardware, which opens new opportunities. The company is already working with manufacturers such as iHome — others will be announced later in the quarter, we’re told. It’s feasible that we’ll see an Amazon Alexa-like music-centric service built into devices, so if you have a Bose hub, you can use your voice to play music without needing an app.

Melody is currently only available for iOS, but an Android version is scheduled to be released in Q1 2017.