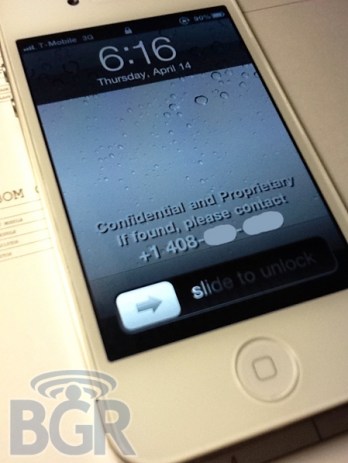 File this one under “well, duh”: Apple is apparently testing out the iPhone on T-Mobile’s network with prototype devices, according to photos leaked to the mobile site Boy Genius Report.

Even juicer, the prototype iPhone is likely sporting an A5 chip, just like that super-powered “iPhone 4S” we reported on a few days ago, 9to5 Mac reports.

That Apple is testing the iPhone on T-Mobile comes as no surprise — the company would be silly not to make sure that its chief moneymaker is compatible with one of the biggest cellular networks in the US (even if it is the smallest of the big four carriers). T-Mobile’s network runs on the same GSM standard as AT&T, but its 3G runs on a different frequency that’s incompatible with AT&T and current iPhones.

It is surprising, however, to learn that the T-Mobile prototypes may be packing the A5 chip. It’s a sign that Apple is working to make sure its next iPhone is fully compatible with T-Mobile, and that it’s less concerned about bringing over the iPhone 4 (I would bet the same is true for Sprint at this point). As BGR points out, it’s probably too late for Apple to bring the iPhone 4 to T-Mobile anyway.

T-Mobile users will eventually get access to the iPhone if AT&T’s proposed purchase of the company passes federal regulators. But even if that deal does go through, it will take years before AT&T merges the two carriers’ networks. By testing out the iPhone on T-Mobile’s network now, Apple is ensuring that the iPhone will be available to the carrier’s customers sooner. And ideally, Apple will be able to have the next iPhone run across all 3G networks with a single networking chipset, which even Verizon has said will be a part of the next iPhone.