Outdoor clothing retailer The North Face will launch a mobile app next month that lets users engage with Watson, the world’s smartest computer, to help find the right item for them.

It’s the first mobile app experience to put Watson, the powerful artificial intelligence computer owned by IBM, to use in a retail environment. The app will allow you to speak to it openly on the phone — where the Watson-powered shopping assistant will engage you in a question-and-answer conversation to help figure out exactly what you need.

Let’s say you want a spring jacket. The new app will save you from the usual online shopping experience of scrolling through pages and pages of jacket images — the North Face has 350 jackets, with different weights, styles, and protection levels.

Wondering whether you need down filling, or synthetic insulation, or something even lighter, like cotton? Sometimes you don’t even know where to start. That’s why Watson steps back and asks where exactly you’re going to use the jacket, and when (to help it know what temperature range you’ll be in), and whether you’re looking for men’s or women’s, and what sort of activities you plan to engage in.

It then automatically calculates things and — voila — spits out the jackets it thinks are best for you. 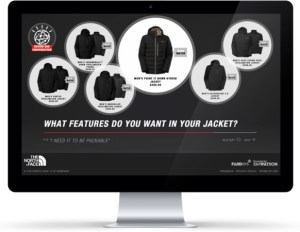 Above: Desktop version of The North Face’s shopping assistant

The North Face, based in Alameda, California, started testing the technology in November, though the bulk of it was through the desktop version. Experimenting on the mobile site was tougher because of the phone’s tiny real estate. It’s difficult to show multiple products in a row on a single screen, and product images can weigh a page down and slow rendering time, said Cal Bouchard, senior director of ecommerce at The North Face, in an interview with VentureBeat.

The app, while obtainable in the major app stores, will remain browser-based. TheNorthFace.com is a responsive web site, so all experiences built on the site are available on desktop, tablet and mobile, the company said. The Watson-based assistant is built similarly on a responsive platform, but by April will have been designed with a mobile-first UX, the company said.

The company generated encouraging results from its two-month testing, which formally concluded in January. Some 50,000 people used it, engaging for an average engagement of two minutes. Users who provided feedback rated the experience a 2.5 out of 3, and 75 percent said they’d use it again, said Bouchard. The technology generated a 60 percent clickthrough rate to try product recommendations. 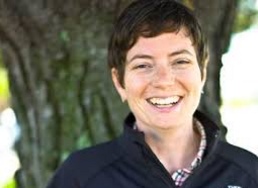 Above: Cal Bouchard, senior director for ecommerce, The North Face

While the official trial period is over, The North Face has kept a link open for people to try out the technology: www.thenorthface/xps. I tried it, and found the results mixed. It froze on my first search, perhaps because I unknowingly threw it a curveball: I was shopping for my 14-month son, and Watson hadn’t catalogued youth clothing yet. Here’s what happened: I started by telling it I wanted to shop for a jacket for the coming weekend in NYC, for my “little boy.” It then asked whether I wanted to shop for men’s or women’s jackets, and then froze.

I reloaded it, and used a slightly different term for boy, using the word “kid” instead. It then appeared to understand me, telling me Watson hadn’t been trained yet for searching youth clothing. But generally, I marveled at the data it gathered, and how it appeared to do calculations in the background.

It’s at second or third grade level, but getting smarter all the time 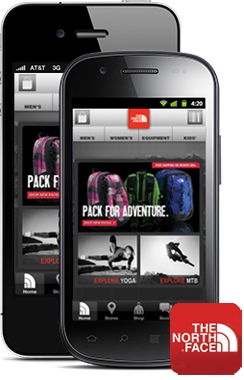 Bouchard acknowledged the experience can be buggy, but she said that’s to be expected for now. Watson’s artificial intelligence works by being taught things, and “it’s probably at a second or third grade level,” she said. As it learns over time, the AI will get better and better. That includes soon understanding all of the synonyms for the word kid, including child, son, daughter, and so on. She said it will take a couple of years to get the AI just right. (The bug I encountered was still there when I tried it again two weeks later.)

Indeed, when the app is rolled out next month — Bouchard did not give a specific date, saying only “April” — it will come with deeper layers of data, including The North Face’s new spring wear line, and so should be more intelligent.

“We think this is game-changing”

The North Face partnered with Oakland design agency Fluid to build the experience. Fluid developed and hosts the software running the site. That’s not a coincidence, since Fluid is the firm IBM chose to showcase how Watson’s artificial intelligence can work in ecommerce. IBM invested in Fluid two years ago. It’s part of IBMs strategy to make Watson smarter by going deep in each industry. The North Face’s shopping assistant technology took 12 months to build, and it’s Fluid’s first showcase effort.

The platform’s smarts is what sets IBM apart from other artificial intelligence efforts in shopping, such as Amazon’s Alexa. Amazon may be winning with technology that serves millions of SKUs at a low price, but it hasn’t won on the ability to serve your personal needs, said North Face’s Bouchard. Using Watson, The North Face is better placed to find out who you are, what you want to do, and what your coming adventure is, she said — “It’s a niche we can play in.”

“This is unprecedented,” she added. No one out there is using this AI Watson technology with natural language question-and-answer with the consumer, she said. “We think this is game-changing.”