Almost three-quarters of all WhatsApp users access the messaging app on Android, according to a study from GlobalWebIndex (GWI).

Extracting data from a broader study of almost 50,000 Internet users, GWI’s WhatsApp segment focuses on 12,606 users of the mobile app from across 34 countries. It found that 73 percent of WhatsApp users are on Android, followed by iPhone, which claims 22 percent.* 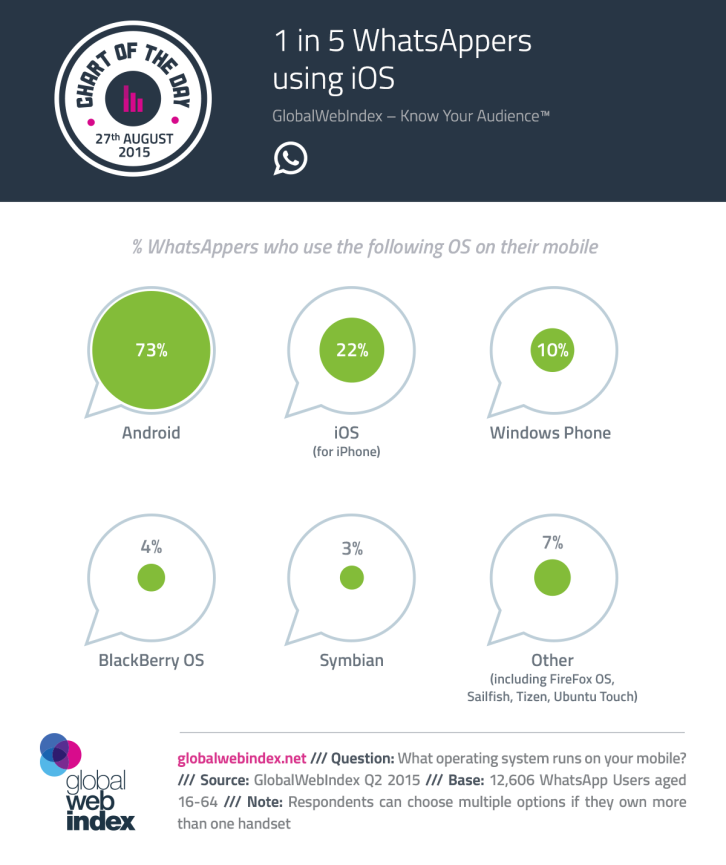 Above: GlobalWebIndex: WhatsApp on mobile

WhatsApp’s latest official figures from April claim the app has 800 million active monthly users, up 100 million from January. Using that growth as a rough benchmark, it’s perfectly feasible the company already has 900 million active users, and is awaiting the magic billion mark before making its next announcement.

Earlier this year, WhatsApp became only the second non-Google app to hit one billion downloads on Android (after its parent company, Facebook), though, as noted, its active monthly users figure is somewhat less than this. However, tallied against WhatsApp’s official active users figure, this did suggest that Android claimed the lion’s share of its user base, so GWI’s data may not be hugely surprising.

WhatsApp’s continued growth is likely reflective of smartphone uptake around the world, much of which is powered by Android in high-growth markets. And this hints at where WhatsApp is popular around the world.

There seems to be no end of new entrants to the Android market, with a recent fragmentation study revealing there are now at least 24,000 distinct Android devices out there, up 28 percent on the previous year. Many of these are low-cost (sub-$200) handsets in emerging markets.

Recent figures from IDC suggest that while smartphone growth is expected to slow globally, with China joining the likes of Western Europe and North America in terms of smartphone saturation and adoption, other emerging markets such as India are still ripe for growth. And these could prove key markets for WhatsApp and other messaging apps, of which there are many. 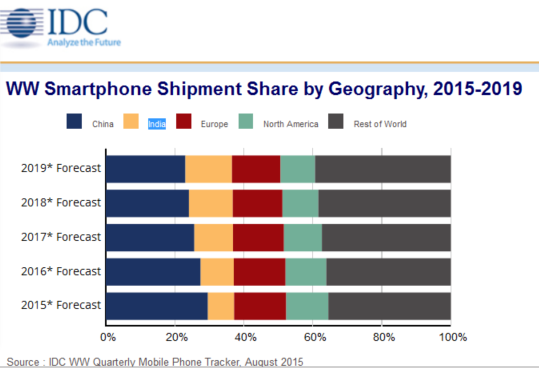 VentureBeat asked GWI for a regional breakdown of its WhatsApp figures, and it’s interesting to see how the numbers vary by market.

But the most significant change in GWI’s WhatsApp numbers can be found in North America, where it’s 54 percent for Android and 46 percent for iOS. This is roughly in line with the split between iOS and Android users in the U.S., which generally hovers around the 50 / 50 mark.

A notable little aside in GWI’s North American numbers is that Android and iOS make up 100 percent of WhatsApp’s market. In other regions, there’s at least a few percent reserved for other platforms, including Windows Phone, BlackBerry, and Tizen.

WhatsApp’s Android / iOS split may also explain why the company has been giving Android first dibs on new features of late, with a number of notable updates to its mobile apps over the past week.

First up, the messaging giant finally opened its desktop Web app to iOS users, more than six months after it arrived on Android. Then the Android incarnation was given a handful of useful features, including customized notifications, so that you know exactly who’s messaged (or called) you without looking at your phone, and the ability to mark messages as “unread” or “read.” These are yet to arrive on iOS.

This is in stark contrast to WhatsApp’s history on mobile. The messaging app kicked off exclusively for iPhone users in November 2009, before landing on BlackBerry two months later, Symbian OS four months after that, and then eventually on Android in August 2010.

But with Android growing its market in the five years since, and WhatsApp evidently seeing a strong return on this growth, the tables have turned somewhat.

At any rate, with WhatsApp’s $22 billion price tag, Facebook clearly knew what it was getting into when it bought the mobile messaging app in February 2014 — it was future-proofing itself, ensuring it remained relevant at a time when mobile-messaging was thriving. And it seems Android is playing a huge part in WhatsApp’s continued success.

*The figures in GWI’s graph amount to more than 100 percent, because respondents are allowed to choose more than one OS if they have multiple devices.