*This article was updated on July 7 with some clarifications, please see bottom of this post for details.*

Ticketmaster will soon be able to admit you to live events using nothing more than a discrete digital audio broadcast from your smartphone.

The ticketing giant has been slowly rolling out a new service called Ticketmaster Presence to venues, designed to replace paper tickets with digital passes that use a range of proximity-based technology including NFC, RFID, and audio.

Indeed, as part of this rollout, Ticketmaster has partnered with Lisnr, a data-over-audio company that uses an ultrasonic sound technology it calls “smart tones” to transmit information between devices.

There are myriad use-cases for Lisnr’s  technology — for example, it recently partnered with Jaguar Land Rover to enable vehicles to communicate with mobile devices, other cars, and potentially the broader environment, where smart tone technology is enabled. This could be used to replace a key fob with a smartphone to unlock the door or to personalize seat settings, including placement and climate control.

Founded out of Cincinnati, Ohio in 2012, Lisnr has raised north of $14 million since its inception and has some notable backers, including Intel, which led its $10 million series B round back in 2015. As one of the world’s largest ticketing vendors and distributors, Ticketmaster is a major coup for Lisnr as it looks to scale its technology in the real world — the company told VentureBeat that this is the biggest commercial agreement it has made to date.

Alongside more traditional forms of proximity-based smarts, Lisnr’s technology will be used to power attendee verification for hundreds of millions of tickets. The rollout has already begun in some North American venues, a process that will continue globally in the coming years.

Lisnr’s smart tones constitute audio signals in the 18.75 kHz and 19.2 kHZ range and are inaudible to more than 90 percent of the human population. As you approach the venue, you take out your phone and it broadcasts your ticketing data, be it over smart tones, NFC, or RFID, which is detected by a scanner at the venue and confirms your identity, thus expediting the entry process. 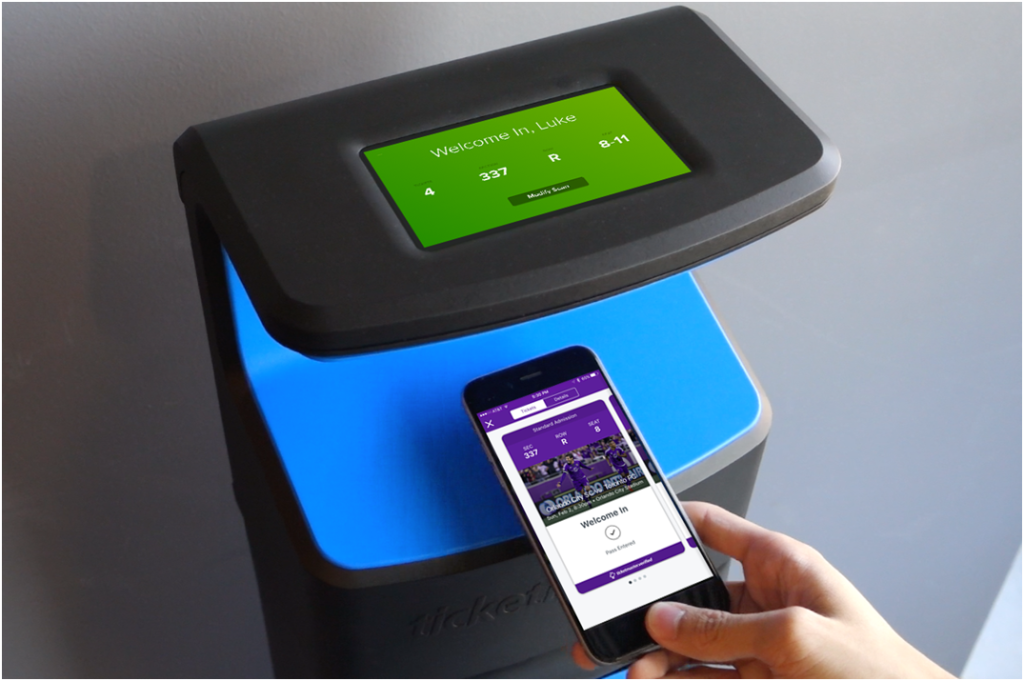 Above: Ticketmaster Presence with Lisnr

So why the shift toward paper-free tickets? There are a multitude of reasons including cost and efficiency, not to mention the proliferation of smartphones making this convenient for gig-goers. But more than that, digital tickets give venues, artists, and other relevant parties a window into the lifecycle of a ticket, from sale through to attendance, as well as transfers and resales. This lets everyone know who is actually at an event, while providing consumer insights.

Fraud protection is another reason for adopting a purely digital approach — digital tickets are much more difficult to duplicate.

It’s also worth noting here potential use-cases beyond simply checking in to venues. Each smart tone carries its own unique identifier, meaning venues can install smart tone scanners around a space to track gig-goers as they move around — this not only arms venues with a vast swathe of geo-location data, it also lets them target individuals with tailored messages and personalized experiences.

Though tracking within venues isn’t something that Ticketmaster has indicated it plans to introduce, this kind of use-case clearly opens Lisnr’s technology to applications far beyond live events and into the broader consumer realm, with shopping malls able to send proximity-based alerts and offers to shoppers in real time as they traverse a given space.

For now, pushing toward digital ticketing allows venues and artists to garner deeper insights into event attendees’ habits and preferences.

“We used identity as our North Star — our guiding light to develop a product that makes each individual fan experience the greatest it could be,” explained Justin Burleigh, EVP of product at Ticketmaster. “This means using identity to drive customized experiences based on who you are and where you are, eliminating fraud, resulting in a safer environment, and delivering more personalization based on the specific event you’re attending.”

In the future, the technology could potentially be used to enable venues to send proximity-based messaging to attendees — this could mean artists engaging with fans, or venues striving to drive up their revenues through upselling goods, such as merchandise.

Data-over-audio is still a fledgling technology in terms of day-to-day practical use-cases. But startups like London-based Chirp have been pushing to enable easy data-transfers using sound, and Google’s Nearby uses near-ultrasonic audio as part of its proximity-based messaging protocol. And Ticketmaster tapping Lisnr’s smart tones in venues around the world will go some way toward opening the technology up to the masses.

*An earlier version of this article suggested that Ticketmaster would use the technology to track a gig attendee’s movement around a venue. However, Ticketmaster has since confirmed that it has no plans to implement such technology.

We also clarified that Lisnr’s integration constitutes part of a broader service called Presence, that will including other proximity-based technologies such as NFC and RFID.

We also clarified that Lisnr, and the broader Presence service, won’t give Ticketmaster more control over the reseller market. But in helping to combat fraud, it will make secondary markets more appealing for buyers.