Where is technology headed?

The Churchill Club of Silicon Valley just wrapped up one of its most anticipated events: the Annual Top Ten Tech Trends Debate. Five well-known and opinionated venture capitalists weighed in on what trends will take flight and what trends will fizzle out in the months ahead.

The audience of around 300 people was asked whether it agreed or disagreed with the VCs’ predictions. I’ve ranked them below, according to how well they were accepted by the audience.

Trend 1: Customer data stored by different service providers will be combined to create more intelligent services. Josh Kopelman, managing partner at First Round Capital, a seed-stage venture fund, who founded online retailer Half.com (sold to eBay after a year for $300 million) said such customer data includes your financial records, dinner reservations, preferences in the iTunes store, random searches on Google and much more. In this way the Internet goes from satisfying explicit user needs (like searching for a friend to add on Facebook) to satisfying implicit needs (like telling who you should add and why adding them would be helpful to you).
Audience: 95 percent voted “Yes”. 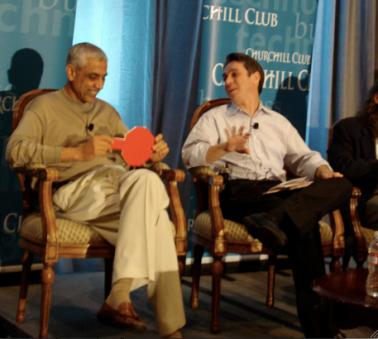 Trend 3: Water technology will replace abating global warming as a global priority. Joe Schoendorf, partner at Accel Partners, previously vice president of marketing for Apple, said the world is running out of usable water and this will kill millions more people in our lifetime than global warming.
Audience: 80 percent voted “Yes”.

Trend 4: The mobile device industry’s migration to smart phones will produce great disruption for big industry players. Roger McNamee, co-founder of Elevation Partners together with U2 lead singer Bono, and early private equity investor in technology, said the disruption will exceed what the PC industry experienced as it moved from character mode to graphical interfaces. Shifts in the competitive balance will hurt Motorola, Microsoft and probably LG Electronics, Samsung and Sony Ericsson. Apple, Nokia, Palm and RIM will do better. [McNamee’s firm is an investor in Palm]
Audience: 75 percent voted “Yes”.

Trend 5: Booming market for healthy aging technologies Steve Jurvetson, managing director of Draper Fisher Jurvetson and well-known for his founding investment in Hotmail, said a booming market in such technologies will allow people in their 60s and beyond to continue working and living a good life. Every 11 seconds, a baby boomer from the 1940s turns 60. These people have time and money and are Internet-savvy, so they represent an enormous market for services like mental exercise programs and online education in various topics. It fits into a larger vision that could also include an eBay for information services that exceeds the market for physical goods.
Audience: 70 percent voted “Yes”.

Trend 8: The mobile phone is your most important device. This prediction by Khosla is similar to Trend 6, but he predicted an even more intimate connection with the phone: Mobile phone applications will extend beyond e-mailing to include a virtual credit card, your ID, access to location systems and personal information filing systems. If you lose your phone, your data on it will all be backed up on a network so that you can load it all on to a new phone. Ten years ago people thought it would be ridiculous to have a camera in your cell phone, in two years you will have two cameras per phone – one for taking photos of yourself, and one for taking photos of others.
Audience: 40 percent voted “Yes”.

Trend 9: There is going to be a venture capital shakeout. Lower costs and barriers to entry for startups will have a dramatic impact on the venture capital industry and lower returns. This was Kopelman’s prediction.
Audience: 40 percent voted “Yes”.

Trend 10: Within five years everything that matters to you will be available on a device that fits on your belt or in your purse. This was McNamee’s prediction, and it’s similar to Trend 8. This will cause a massive shift in Internet traffic from PCs to smaller devices.
Audience: 30 percent voted “Yes”.