TripIt, the online service that lets you create and share your travel itineraries, has launched a free application for the iPhone. The app lets users view their meticulously organized travel plans on the go — even in airplane mode — eliminating the need for cumbersome maps and paper schedules, the company says.

When you view an itinerary in the app, it’s not just a list of next stops. For 500 different sites and brands — resorts, restaurants, rental car companies, airlines, etc. — it lets you link to various web sites and make direct calls with one or two clicks. This could come in handy if you happen to be wandering around a foreign city searching for your hotel, hefty luggage in tow. 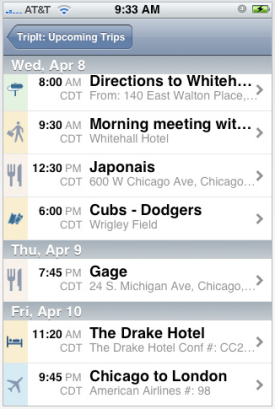 Based in San Francisco, TripIt says the app was designed to fulfill user requests. After you make your bookings via the company’s web site, you simply forward your confirmation emails to plans@tripit.com, and they’ll be aggregated in mobile form. This works on a few other web-activated cell phones, like the Blackberry, by providing basically the same information at http://m.tripit.com (although this doesn’t work without an active wireless connection). You can download the iPhone app in the Apple App Store, on iTunes or on TripIt’s web site.

The primary feature the app lacks is the ability to share travel plans with others from your phone. This a major pillar of TripIt’s business online, so mobile support is probably not too far behind. At some point, you should also be able to sync your itineraries with your online calendar of choice, whether it be Google Calendar or iCal, all on your phone without visiting the web site (which offers this service already).

TripIt has opened its application programming interface so that third-party developers can create mobile apps that fill these gaps and others. It says it has about 100 developers actively doing this right now, so there should be a new wave of apps integrating their travel data sometime in the near future.

TripIt is definitely not the first travel site to produce a mobile app. Expedia, Travelocity and Orbitz each have their own, which let users check their flight status, find nearby hotels and keep track of their trips while in transit. But by and large, they don’t offer the same range of options or level of detail. And smaller rivals like Dopplr and TravelMuse have yet to release apps of their own. The lack of competing options is reflected in TripIt’s No. 11 rank out of the many travel apps in the App Store.

TripIt last raised funds in April 2008, roping $5.1 million in a second round of financing from Sabre Holdings, O’Reilly AlphaTech Ventures and European Founders Fund. Before that, it brought in $1 million from O’Reilly.