Twitter is making a small but notable contribution to the growing battle against President Donald Trump’s Executive Order that seeks to prevent travelers and immigrants from specific Muslim-majority countries from entering the U.S. 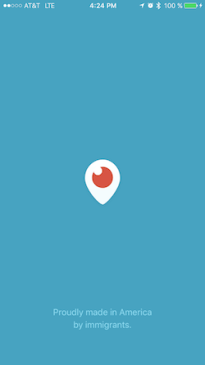 Above: “Proudly made in America by immigrants”

Periscope, the live video startup Twitter acquired way back in 2015, has updated its loading screen today with a small bit of text at the bottom that reads: “Proudly made in America by immigrants.”

Periscope released this statement today on the matter:

The recent executive order to halt immigration from seven countries in the Middle East and Africa has forced us to consider a disturbing alternate reality in which the Periscope team is irreparably changed.

Periscope is built, maintained, and operated by people from many faiths and countries. Without immigrants and refugees, Periscope would not exist. For this reason, we are updating the Periscope loading screen to make a simple true statement: ‘Proudly made in America by immigrants.’

We feel this is an important statement to make about who we are and the real impact of these policies. We also fundamentally believe in maintaining an impartial product that gives a voice to every person in our community. Periscope has been and will always be a safe environment for people of any political and religious viewpoint. Now more than ever, Periscope is a critical tool for unfiltered, global dialogue.

While the move is hardly the equivalent of marching on the White House, it represents one of a number of similar initiatives that have come to light over the past few days.

Earlier today, messaging giant Viber revealed it would be offering free calls from the U.S. to the seven countries affected by the Executive Order, namely: Iraq, Syria, Iran, Libya, Somalia, Sudan, and Yemen. Elsewhere, Google pledged $4 million to four organizations that support immigrants, while Uber announced a $3 million pot to help drivers with their immigration defense. And Airbnb promised free temporary housing to those affected.

Twitter, for its part, hasn’t announced any initiatives itself, though cofounder and CEO Jack Dorsey tweeted his support at the weekend.

The Executive Order's humanitarian and economic impact is real and upsetting. We benefit from what refugees and immigrants bring to the U.S. https://t.co/HdwVGzIECt