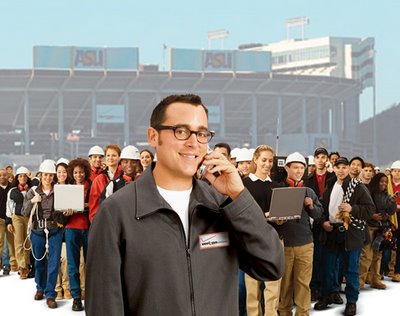 Both AT&T and Verizon are betting on LTE, or Long Term Evolution, technology for their 4G networks. WiMax, which Sprint is currently relying on, is the competing 4G network standard.

Unfortunately, there won’t be any LTE-compatible phones coming this year. At launch, Verizon will offer two 4G USB modems from LG and Pantech that will each cost $99.99 after a $50 rebate.

Consumers will be able to choose from two LTE data plans: $50 for 5 gigabytes of data, and $80 for 10 gigabytes (overage charges for both are $10 per gigabyte). The company says more LTE modems will be released in the next few weeks. All of the modems support its existing 3G network.

The company says its LTE network will offer a ten-fold improvement over its 3G network, with download speeds from 5 to 12 megabits per second and upload speeds from 2 to 5Mbps. The 4G network will offer half the latency of Verizon’s 3G network, with speeds comparable to wired broadband networks, according to Verizon Wireless CTO Tony Melone. Verizon plans to roll out its LTE network nationwide by the end of 2013.

Verizon will also equip over 60 airports across the country with LTE — some inside of its 38 LTE markets, and some outside to serve road warriors.

At the moment, Verizon is treating LTE and 3G access completely separately — meaning you’ll have to pay more for LTE access once LTE phones are available. Come late 2012/early 2013, the company may try to unify its plan structure to include both LTE 4G and 3G. Verizon also says that it will start to transmit voice communications over LTE data (instead of a separate voice network) around that time as well.

The company will talk about more LTE-compatible devices at the Consumer Electronics Show in January. It expects to launch those devices sometime mid-2011.

Verizon may not be the first carrier to offer a 4G network (T-Mobile is calling its HSPA+ network 4G, and Sprint’s WiMax 4G network has been live for some time), but it definitely seems to be the most methodical. AT&T hasn’t fully laid out its 4G plans yet, but we know that it’s upgrading its 3G network over the next few years as a stopgap solution until its 4G LTE network is available.

Verizon, meanwhile, is relying on its swath of contiguous 700 megahertz wireless spectrum to push out its 4G network as quickly as possible. That spectrum means Verizon has the potential to cover more of the country in 4G than any other carrier. It will be interesting to see how AT&T, which only has access to 700 MHz spectrum in certain areas, responds.