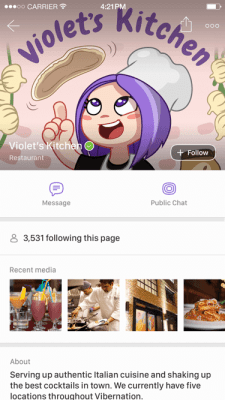 Viber has announced a new suite of tools designed to connect businesses and marketers with the mobile messaging app’s 800 million users.

With Public Accounts, Viber is pushing to become a platform through which companies can both broadcast messages en masse and communicate one-to-one with customers. It’s being touted for use across customer service, marketing, and sales.

It’s perhaps fair to say that Viber is borrowing at least one page from Facebook, which has been turbo-charging its Messenger platform credentials over the past year or so, and is well on its way to becoming a central tool for connecting brands with customers.

Indeed, Public Accounts seem a lot like Facebook Pages, with users able to follow and receive updates. Viber’s API also allows companies to connect with their existing customer relationship management (CRM) system, while they can also manually connect individually with customers through live chats with humans or with chatbots.

“We are, of course, aware of what’s going on in our field, but we take pride in crafting the best possible solution based on what we believe is the most suitable experience for people using Viber,” explained Viber COO Michael Shmilov, who officially launched the new service at Web Summit today

This isn’t the first time Viber has courted businesses. Through Viber for Business, companies could already access a Public Chats feature, which was designed as a way to let brands broadcast messages and create a public presence on Viber. But with Public Accounts, Viber is going several steps further by giving businesses more ways to communicate directly with their customers. 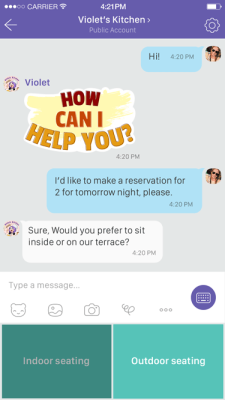 “On Viber, people already connect securely and freely with their families, friends and colleagues,” added Shmilov. “Today, we are introducing a way for people to start connecting with businesses, too. The first set of tools will enable businesses to reach their audience on Viber using messaging and rich interfaces, which can be tailored to the various needs of any business.”

Founded out of Israel in 2010, Viber today claims more than 800 million users on Android, Windows Phone, iOS, and desktop. Like Facebook and other messaging apps, Viber enables group or individual chats, and also offers voice and video calling functionality. The company was acquired by Japanese ecommerce giant Rakuten for $900 million in 2014.

Public Accounts are available around the world from today, launching in partnership with a number of brands including The Weather Channel, Yandex, and The Huffington Post.

Though any business is able to create a Public Account, at first companies will have to apply to Viber, with approval promised “shortly after” if nothing untoward is detected. “Later, we will enable creation from within the app, ” Shmilov told VentureBeat. “We just want to test and optimize moderation and discovery functions.”