Vuzix is unveiling an optical technology for smart glasses today that it says will dramatically improve wearable technology — watch out, bulky Google Glass.

Vuzix said that, in partnership with Nokia, it has developed wearable computing technology that can be used in standard eyeglass frames in the coming year. 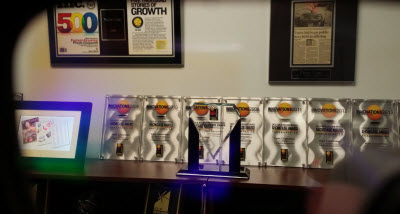 Above: Vuzix’s monocular version has a 30-degree field of view.

The Rochester, N.Y.-based company is unveiling the technology at the Wearable Technology Expo in Los Angeles. Ever since Google unveiled its Glass project, wearables have become a hot category. All sorts of companies are developing technology that combines miniature electronics with standard glasses or watches.

“These smart glasses today all look like they came out of a science-fiction movie. These optics are going to change that,” said Vuzix chief executive Paul Travers in an interview with VentureBeat. “By the time we get to the standard glasses version, it will be for the regular consumer.”

Travers hopes the technology will be so much less bulky that it will be accepted more easily than Glass, which stands out because it is so bulky.

Vuzix has a working model dubbed M2000AR HMD, a monocle [pictured at top] for industrial purposes, that is available today. The product is geared for outdoors and harsh environments, and it even comes with a hard hat.

And the company has also announced the M100 [left] as a smart monocle device for commercial use in enterprise, industrial, medical, business-to-business, and professional applications.

A successor to the M100 that features augmented reality technology in a standard eyeglass frame will launch for consumers in about a year. All are based on the Android mobile operating system and can run lots of Android apps.

The M2000AR HMD is the first product to use Vuzix’s Waveguide optics, it jointly developed with Nokia. It is one of a number of products the company is designing in the video eyewear and smart glasses categories in the enterprise and consumer markets.

Google Glass and other smart glasses use reflective or refractive optics, where they use mirrors or index materials to bend light and effectively create a magnifying glass in front of your eye. From Oculus Rift to Seiko Epson’s smart glasses, the wearables often have the drawback of having bulky boxes somewhere on the glasses in order to focus and create a virtual image. Google’s optics are smaller in part because they have a tiny field of view. 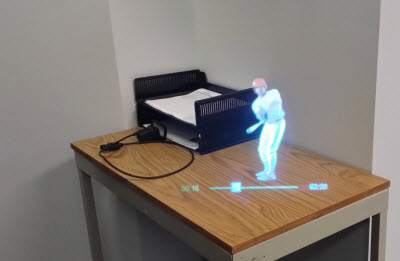 Travers said that Waveguide optics are a revolutionary new way of moving light within smart glasses and are a fraction of the size and weight of conventional prism-based optics. Waveguide optics also deliver a much wider field of view; it uses a 1.4 millimeter window with a tiny input pupil, similar to a fiber optic cable, that is expanded using a hologram in front of the eye. Light isn’t bent through bulk material as with conventional optics.

The result is a smaller mass, weight, and volume. It is simpler and has better overall optical performance. The company built the technology with the U.S. government for some time. It was designed for Special Forces soldiers who could use it to control drones.

Nokia originally developed the technology and licensed it to Vuzix, which integrated it with its own Waveguide technology.

The goal is to make the technology less intrusive so it becomes a mainstream product.

“This technology is a big part about making that happen,” Travers said.

The M2000AR is a monocle display that comes with a 720p display and a 1080p camera. It has an HDMI interface, electronic sunglass tint, a 30-degree field of view, and it can be used in the daylight with up to 8,000 Nits of brightness. It has integrated head-tracking, an integrated compass, anodized aluminum alloy enclosure, and a rechargeable lithium ion battery. The M2000AR will be at the 2014 International CES tech tradeshow in Las Vegas in January.

Vuzix has 36 patents and 12 applications pending. The company is publicly traded and it was founded in 1997. Vuzix wants to license the technology to other companies. NTT DoCoMo recently demoed the technology at a trade show. Vuzix plans to sell either subassemblies or finished goods to its partner companies.