Whistle is going a step beyond its doggie fitness band for its next pet gadget.

The company today announced WhistleGPS, a dog collar that will keep tabs on your pet’s location in addition to tracking their activity. But most interesting of all, it offers GPS functionality without relying on a traditional cellular carrier.

Instead, Whistle has partnered with Sigfox, a French company that’s developed a low-power wireless network exclusively for connected gadgets. WhistleGPS will be one of the first devices on Sigfox’s network in the U.S., which is scheduled to roll out across 25 U.S. cities in 2015. 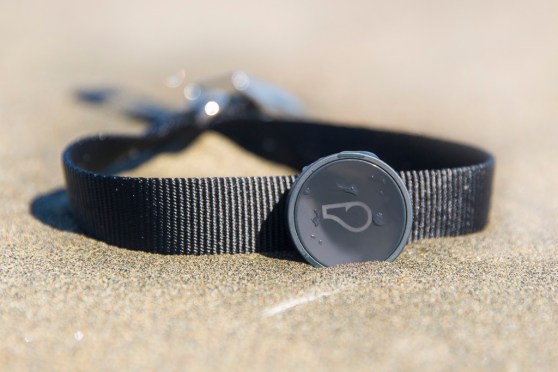 Above: The WhistleGPS connected dog collar

Since it doesn’t have to pack in a traditional cellular radio, WhistleGPS is a third the size of other GPS dog collars (such as the Tagg). It can also last for a week without needing to be recharged — about twice as long as other connected collars.

Sigfox’s network runs on “sub-gigahertz” frequencies, which allows it to cover huge areas (and deep into buildings) with far fewer base stations than cellular carriers. The big downside? Sigfox’s network is so slow that it’s measured in kilobytes — which makes it mainly useful for short bursts of data from connected gadgets.

You won’t be streaming music off of Sigfox’s network, but it’s ideal for connecting gadgets to a network right out of the box, instead of configuring them for cellular. Sigfox has already deployed its network across France, Spain, and the U.K., where it’s being used in things like water heaters and smoke detectors.

WhistleGPS will be available for preorder in May for $129, but it won’t ship until next summer. Ben Jacobs, Whistle’s CEO, tells me he isn’t too worried about announcing a product long before it’s actually available. Whistle did the same thing with its first gadget, and it allowed the company to get some useful feedback from potential customers.