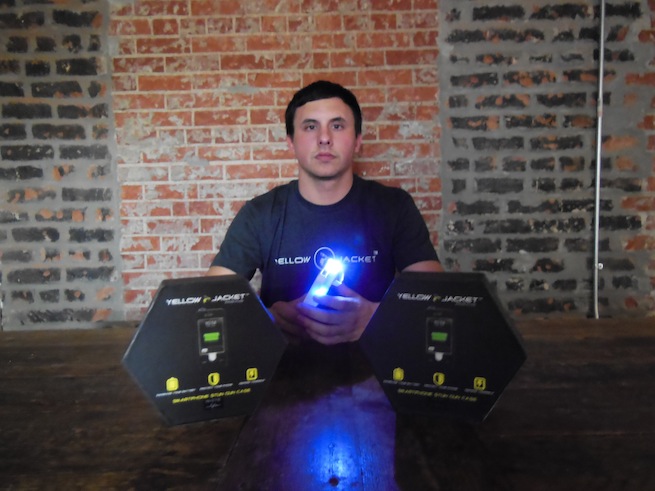 Yellow Jacket is a Baton Rouge, La.-based startup that makes an iPhone case that protects not just your phone but also you from attackers.

That’s because Yellow Jacket cases also double as stun guns that can deliver 650,000 volts of electricity. That’s not strong enough to put you in the hospital, but it will still hurt like hell. Oh, and it also charges your phone, “Because, why not?” said Yellow Jacket founder and CEO Sean Simone during a live demonstration at the Southland Conference in Nashville, Tenn. last week.

“The greatest advantage people have against an attacker is the element of surprise,” Simone told me, adding that pulling out your phone is much less suspicious than a menacing-looking taser. “We tell people all the time, though, this is not an offensive weapon too. This is purely for defensive purposes.”

Currently, the company only has a model for the iPhone 4/4S, which is priced at $140. But fear not Android users, for Yellow Jacket is also developing a case for the Samsung Galaxy S3/S4 that should be due out in the near future.

And notably, you don’t have to worry about the stun going off in your pocket as there’s a protective cover to prevent accidents. 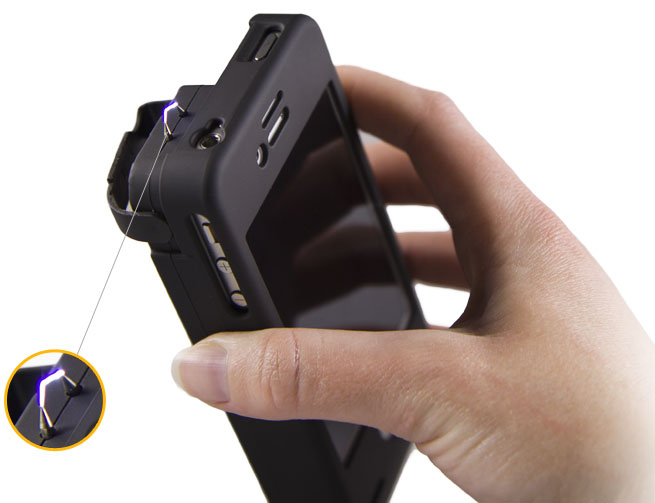 To get one, you can buy it on Yellow Jacket’s website or inside Academy Sports retail stores. However, Simone said he hopes to get the cases in other retail stores such as Gander and Bass Pro Shops by next year.

Perhaps the greatest thing about this startup isn’t that it exists (although some might argue otherwise) but that Yellow Jacket has managed to launch itself with just five employees living outside of Silicon Valley and only $102,000 in funding from a successful Indiegogo campaign.

Simone said the company has sold “thousands” of cases and will hit profitability once it sells about 10,000. But even with all its positive growth and aspirations, the company almost had to pull cases off the shelves.

“Apple initially wanted to shut us down,” Simone told me. That changed when another portion of Apple realized the potential for Yellow Jacket cases to be sold beyond the consumer market. Simone said the company is currently working on prototypes for a more “robust” Yellow Jacket case that could be used by law enforcement, and it has opened negotiations with police departments in California, Texas, Louisiana, and Florida.

But for now, Yellow Jacket is working on a new case for the iPhone 5 and iPod Touch (fifth generation) that features a detachable stun gun portion.

For a closer look at Yellow Jackets stun gun/charger cases, check out the demo video embedded below. We’ve also taken the liberty of embedding a video of real people getting stunned, too.