Six months after unveiling a brand new standalone YouTube app, redesigned and rebuilt with patchy internet connections in mind, Google has finally made YouTube Go available to download for everyone on Google Play in India. 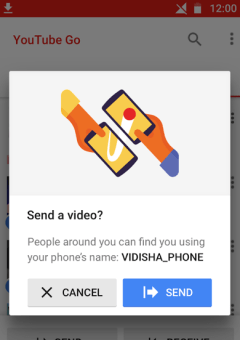 To target the “next billion” internet users in India, Google has introduced a number of initiatives, one of which is the “offline first” YouTube app.

For background, YouTube has offered offline mode in its main app across a number of countries, including India, since 2014. Then, in June of last year, YouTube introduced a new Smart Offline feature in India, enabling users to schedule videos they wanted to download during off-peak (i.e. cheaper) hours.

But with YouTube Go, Google has recreated a new app from scratch, this one designed to work where there is zero or poor connectivity. Users can choose a specific resolution when saving or streaming videos, so if they’re on a slow connection they can expedite downloads or streaming by opting for a lower resolution. Also, YouTube Go lets you preview videos by tapping a thumbnail — this allows a user to get a better idea of a video’s content without having to play it.

Additionally, those with no data left on their plan can have friends nearby share videos with them, even without any internet connection.

The app was in development for well over a year, and it opened for registrations in September with some users given access at that time. Although it is now available to download in India through Google Play, it still remains a beta product for now.

“To get us to this point, we’ve worked hard on refining the features that you’ve inspired us to build, gaining new insights along the way,” explained YouTube product manager, Jay Akkad, in a blog post. “Some things we’ve learned in the run-up to this beta release include making the home screen fresher and more relevant for users so they can find amazing videos easily. We’ve also worked hard behind the scenes to make sharing videos with nearby friends an even more seamless experience, and ensuring that the app works well across a wide range of phones and connectivity.”

Google says it will continue to iterate the app throughout its beta phase and will be hosting some on-the-ground events in Udaipur to solicit more feedback from users.

India has emerged as a key battleground for internet companies as the country prepares to overtake the U.S. to become the world’s second-biggest smartphone market in terms of units shipped. With Google already all-in, the mighty Facebook has also been investing heavily in India, while Samsung recently beat both Apple and Google to launch its mobile payment service in the country.

Meanwhile, Apple is expected to begin manufacturing the iPhone in India soon, and BlackBerry recently signed a licensing deal to sell its branded smartphones in the region.