Usually conversations with customer service representatives are pretty bland, or even painful if you’re trying to resolve a problem. As it turns out, this isn’t always true when dealing with Netflix.

Yesterday Netflix subscriber Norm contacted the company about a problem he was having with an episode of Parks and Rec. In the middle of the episode, the video player would get stuck in a “temporal loop” that continuously played the last three seconds — (sort of like an unintentional YTMND page). Netflix service rep Michael responded by introducing himself as “Captain Mike of the good ship Netflix” and then asked which member of the crew he was speaking with. “Lieutenant” Norm took the bait, responding as if he was a ranking Star Fleet officer from Star Trek.

With the exception of the first two lines, neither side broke character for the duration of the conversation, which Norm shared via the screenshot we’ve embedded below. [Note: Read the full conversation at the bottom of the post.] And before you declare shenanigans, Netflix confirmed to VentureBeat that the exchange is indeed real. 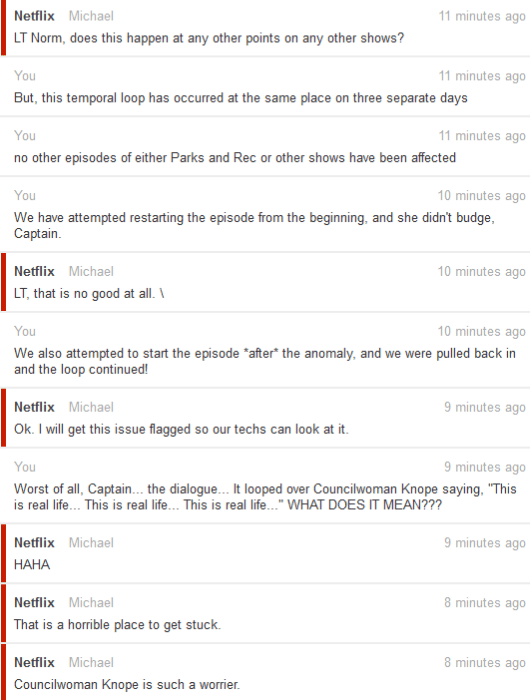 Above: A portion of Netflix member Norm’s exchange with a customer service rep.

I can’t say I’m entirely surprised that Netflix’s Captain Mike wasn’t afraid to have some fun while on the clock. The company has a history of engaging with people like people, which is far different from the pre-approved robotic responses you’re likely to get from customer service reps at other publicly traded companies. For instance, Netflix chief exec Reed Hastings frequently shares info about the company through personal social media accounts. Also, the company no longer does phone calls to discuss its quarterly earning reports with investors — moving instead to do live video presentations via YouTube that Netflix fans might actually pay attention to.

It’s also no surprise that Netflix hires Trekkies. After all, the company did briefly yank Star Trek III from its streaming library while it added proper Klingon subtitle translations. In fact, the only thing that would surprise me is if Captain Mike didn’t get a raise.