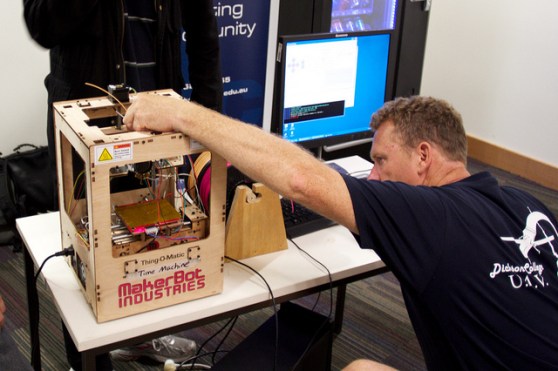 The 3D printing service industry may only be in its infancy, but someone has already found a way to disrupt it.

Makexyz is a 3D printing service with a brilliantly simple premise: Link the 3D printer owners of the world with the designers that need them. It’s like Airbnb or Wheelz for 3D printers.

“Instead of being printed at some Orwellian factory, our objects are printed by real people,” Makexyz creator Nathan Tone told me by phone.

It’s strange to hear the factories of Shapeways and i.materialise described as “Orwellian” so early in their existence, but Tone’s larger point still stands: Makexyz is a disruptive alternative to the 3D printing service incumbents (if you can even call them that yet).

Tone says he got the idea for the service after designing a light switch, which despite its simplicity took weeks to print. “There’s a big benefit to just printing locally. Objects are half as expensive, and you get them twice as fast,” he said.

Here’s how the service works: You sign up, upload your 3D design, and Makexyz will link them to the hundreds of 3D printer owners who can print their objects.

Tone says that Makexyz can print objects for half as much as services like Shapeways. Most printers charge between  $.25 and $1.50 per cubic centimeter depending on what material customers would like to print in. (Products at Shapeways start at $0.75 per cubic centimeter.)

“We’ve been careful to make sure that our prices are lower than working through a big company,” Tone said.

The price factor is also hugely important for 3D printer owners, who in most cases have spent thousands of dollars on their gear. Makexyz gives them a way to recoup some of their costs in their spare time.

So far, Tone says customers are printing a wide range of objects, including art pieces, product prototypes, and even cases for their Raspberry Pi computers. “The service gives us a clear window into what people are working on,” he said.