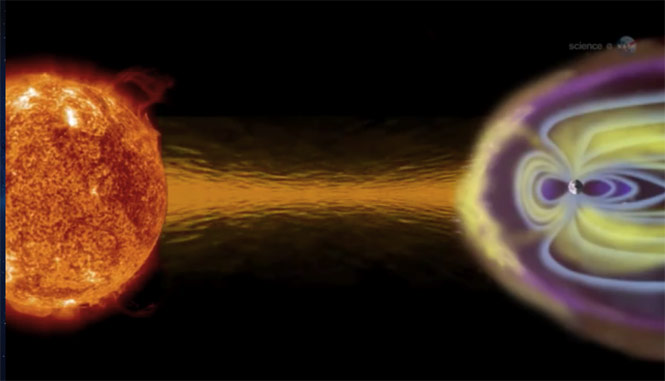 Whatever you call them, they are fictional doorways to faraway places: another planet in the solar system … another star in the galaxy … another restaurant where the service doesn’t suck quite so bad.

But today they’re perhaps a little less fictional than yesterday. At least according to a Science@NASA post: Hidden Portals in Earth’s Magnetic Field, which says they are real, sort of. A NASA-funded researcher has discovered them surrounding the Earth at distances from 10,000 to 30,000 miles.

University of Iowa plasma physicist Jack Scudder is studying them. 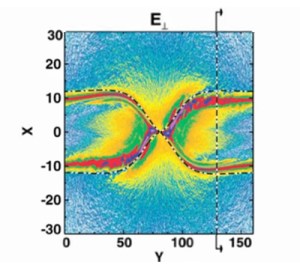 Above: A view of one of NASA’s X-points

NASA’s THEMIS spacecraft and Europe’s Cluster probes have been observing the portals, and NASA is sending a new mission, “MMS”  (Magnetospheric Multiscale Mission) in 2014 to study them in more detail. MMS consists of not one but four spacecraft that will circle the earth, finding and studying the “X-points” where the Sun’s and the Earth’s magnetic fields connect and create portals.

What they are, exactly, is not yet entirely clear, but Scudder says that tons of magnetically charged particles flow through the openings, causing aurora and geomagnetic storms. Some are tiny and disappear almost instantly, while others are large and fairly stable.

According to NASA, Scudder has found shortcuts “worthy of the best portals of fiction, only this time the portals are real.”

Some might beg to differ, pointing out that the best portals of fiction are actually usable by humans, go places that are interesting and somewhat safe (as opposed to the surface of the sun, which is doubtless very interesting but not exactly safe), and can be opened and closed at will.

However, there’s no doubt that this is a pretty cool announcement. Just not one that we can use to get to Tatooine or the Delta Quadrant.

Here’s the full video from NASA: