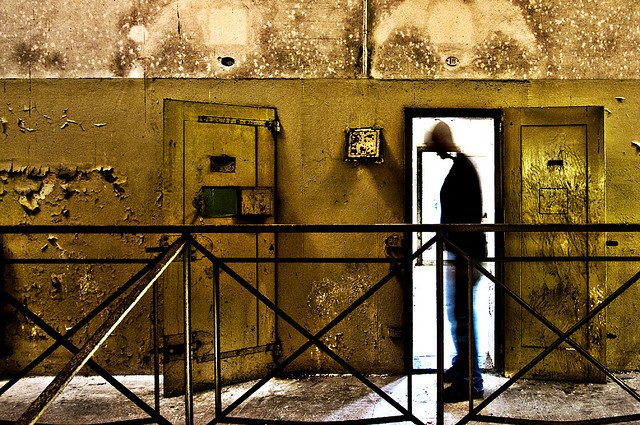 Controversial hacker, troller, and Internet prankster Andrew Auernheimer has been sentenced to 41 months in jail and ordered to pay a $73,000 fine to AT&T for connecting to an unsecured database and collecting a list of the company’s iPad subscribers.

Just moments before sentencing, Auernheimer (also known as Weev), was cuffed by court officers in a struggle over his tablet and phone. Auernheimer, who was not permitted to use computers with keyboards, was asked to surrender his devices, but tried to hand them to his lawyer.

“It looks like Andew got slammed into a desk by federal agents while trying to hand his phone to his lawyer after the court asked for his phone,” his publicist told me via email.

Auernheimer is, by all accounts, a controversial figure, which became abundantly clear in a Reddit AMA (ask me anything) conducted yesterday.

He’s a founder of GNAA (Gay N*iggers Association of America), a group that probably has no actual gay or black members and seems, much as many other online trolling groups, to be devoted to causing as much online damage and destruction as possible. He’s also a member of Goatse Security, a grey-hat organization that focuses on finding and exploiting computer and website vulnerabilities. And he has done things online that most of us would consider morally reprehensible and ugly, if not precisely illegal, such as taking a leading role in the massive online harassment that caused usability expert Kathy Sierra to abandon the Internet.

But the specific charges that he was convicted of and has now been sentenced for seem tame by comparison. Essentially, he queried a public server with exactly the same kind of request your browser sent to the servers that run this website, aggregated the results, and sent them to a news agency, Gawker.

Auernheimer got a harder sentence than the #Steubenville rapists. One journalist equated the prosecution of hackers to the Red Scare.

The charges were based on the same law that federal prosecutors used against Matthew Keys, Aaron Swartz, and Stephen Watt: the Computer Fraud and Abuse Act, which opponents have decried as vague and Swartz’s lawyers have said was misused by federal prosecutors to overly-aggressively pursue Swartz, who ended up committing suicide.

Auernheimer knows he is not exactly a lovable figure.

“I’m a nutjob from Arkansas,” he told me yesterday. “That’s any sane person’s perspective.”

But the question today is whether his exact actions in the AT&T case were illegal. And if they were, how many other actions of ordinary Americans are now being criminalized?

Auernheimer told me yesterday that he already plans to appeal the sentence, and the EFF is helping with the appeal.