Update 3/18/2015: Added a clarification about the origin of the Child Protection System (CPS).

In a meeting room, Ballard, 38, and the young woman sat down. The executive flipped open his laptop. Seated across from Ballard was Imperial County Sheriff’s Sgt. Jimmy Duran. They talked about a few things. About a suspect the sheriffs would arrest the following morning for distributing child pornography. And about the data mining software platform Ballard trained them to use that led to the suspect.

“He brought the technology here that allowed us to make the case. From what I’ve seen, this is a very effective tool for law enforcement. And as a result of using it, we made a good arrest,” Duran said.

As for the young woman who accompanied Ballard to the meeting? Elizabeth Smart, the Salt Lake City teen who was kidnapped from her home in 2002 when she was 14 and spent nine months of living hell as her captors drove her around the country. Smart, now a contributor for ABC news, works closely with the startup.

Ballard calls the software a child protection system (CPS). Incredibly, he and his team had trained the Imperial County Sheriff’s office how to use it the previous week. If they hadn’t, the suspect, who was busted early Friday and charged with possession and distribution of child pornography, would likely have escaped detection.

Ballard, a former CIA veteran and ranking Department of Homeland Security official who ran the agency’s crimes against children unit, is the chief executive for one of the most unusual tech startups you’ve never heard of. Along with social media director Jesse Stay, 28, and operations chief David Barlow, 42, he combs the world with a proprietary CPS data mining software, ferreting out the worst pedophiles and freeing children enslaved by human traffickers.

So far, the team has rescued 35 children and uncovered child trafficking networks in the U.S., Haiti, and Nicaragua. Dozens of child sex offenders have been locked up.

The startup was launched last year with $1 million after Ballard left his job with the federal government, seriously turned off by the beauracratic infighting and frequent refusals of his superiors to let him pursue the most heinous of child trafficking cases, many of them abroad but with roots in North America.

“I was being told, many times, ‘no, it is not in the interest of the United States.’ In 95 percent of the cases I was investigating, they said no because the cases couldn’t be tried in U.S. courts. So I left,” Ballard told VentureBeat.

At the heart of OUR is the startup’s data mining platform. The technology acts as a sniffer, which they deploy against networks that child traffickers and pedophiles use to communicate with each other. CPS can monitor communications through ISPs. And through its data mining protocols, Ballard and his team can isolate, and monitor, the most egregious offenders.

CPS is open source. (Editor’s note 3/18/2015: CPS was developed by the Child Rescue Coalition. At the time this article was published, OUR distributed and trained law enforcement on how to use it. OUR no longer uses this software.)

“It’s an extremely important software platform,” Barlow said. “Using it, we’re able to see patterns, find out who the worst offenders are. Once that’s done, we’re able to prioritize who to go after.”

Both Ballard and Barlow declined to be more specific when describing the software platform’s attributes.

If you call OUR a small group of virtual vigilantes, you’d only be half right. The team has trained dozens of police agencies in the U.S. and abroad on how to use the software. When the team virtually locates offenders, they begin their investigation. After making sure the individual or group is their intended target, they head to the airport and fly to that city or country and contact authorities there. They then train them on the use.

“It’s a way to multiply ourselves in other countries so good work can be done,” Barlow said.

When the team, based in Salt Lake City, heads to foreign destinations, they can count on backup and muscle from a number of sources Ballard is friendly with from his days as a spy or his stint at DHS: former special forces operators: SEALS and Green Berets, retired FBI agents, and cops.

“They do it for free. They want to help,” Ballard said.

The team firmly believes in the power of disruptive technology. And they are adapting more of it. Social media director Stay told VentureBeat that they have begun beta testing Google Glass to film raids and takedowns in realtime and simultaneously feed the video, audio, and images to Instagram and other social media platforms. Stay obtained his glass from the Google Glass Explorer program recently. 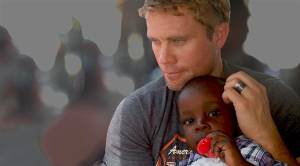 Stay has his work cut out for him. The group’s Facebook page only has 35,000 “likes,” too small a number for a group devoted to saving children. Indeed, the startups motto is “We Rescue Children From Sex Slavery. Help Us!”

“We will begin using Google Glass to start recording from a first person point of view and then feed the information to social media audiences,” Stay said.

While the OUR team raised a $1 million for the startup, they rely on donations to keep the company going. Details on how to help are listed on their website.

Dangerous pedophiles and those who traffic in children are a serious global problem. The team recently discovered, during an investigation in Haiti, that members of a church group in that impoverished country were selling children for $15,000 a piece and then shipping them by boat to customers in Miami.

Those engaged in the odious behavior now have another reason to look over their shoulders, thanks to OUR.

And they are watching.

“Once you share a file, I know who you are because this is your ISP,” Barlow said.

Back in Imperial County, east of San Diego, the hit on the suspected pedophile’s house went down Friday morning like clockwork. Sheriff’s deputies kicked in the door and a few minutes later marched the suspect out in handcuffs. He was placed into a car and taken to the nearby jail, where he was booked on multiple child pornography counts. The suspect was still being processed late Friday.

For Imperial County Sheriff Sgt. Jimmy Duran, the software was the key factor in the investigation and subsequent arrest. Police had no idea the man even existed because he had a clean record.

“It wasn’t until they brought us the technology that we had a case. And when we did,” Duran said, “we started to work it.”