The newest search engine in the world is hidden in the shadows of the Internet, but it shines a light on those shadows that ordinary search engines like Google, Bing, and DuckDuckGo can’t.

It’s TorSearch, and it’s the new way for the million-plus users of Tor to find anything, privately.

“Tor is an anonymizing network — for any traffic passing over it, you can’t correlate the start and end points, and websites can’t see who you are,” founder Chris MacNaughton told me this morning. “I want to be the Google of Tor.” 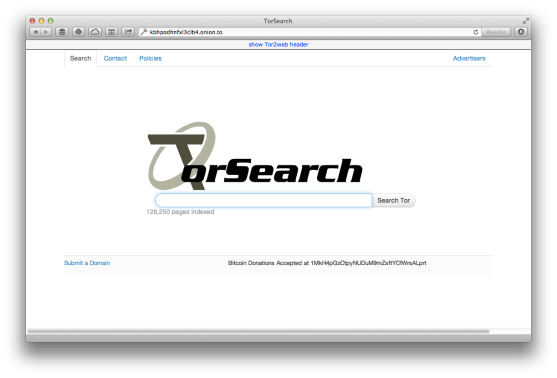 Tor is free software and an open network that functions by connecting you to services you want to access via a separate, third-party introduction point and random relay service. Both you and the sites you want to access talk to that relay, not to each other, and therefore things that you access online are private and confidential — not to mention difficult for law enforcement agencies and shadowy three-letter surveillance agencies to monitor.

With such a challenging black-box connection protocol, it’s not shocking that until now, search on Tor has sucked. That’s a problem that MacNaughton figured he could do something about.

“No Tor hidden service will be crawled by Google, but I built TorSearch the same way Google works,” he said. “I’m spidering a hidden wiki, and it links to other hidden services, and they each link out to a few more.”

Essentially, a Google for the darknet.

Currently TorSearch indexes almost 130,000 Tor resources, and traffic, which surged almost from day one, has doubled in the last three weeks as the Tor community has discovered its new search engine. The site is built as a Ruby on Rails web app, with Apache Soir serving as the search engine.

“It caught me off guard, how quickly it grew,” MacNaughton told me.

Some in the Tor community use the service simply for anonymity and avoidance of tracking, to skip all the surveillance we endure every single hour as we visit Facebook, surf Twitter, view a website with ads, and pretty much go anywhere online.

Others, of course, are on the hidden network for different reasons.

“After the NSA news came out recently, there was a very large spike in Tor users who don’t want to be tracked,” MacNaughton says.

Clearly, of course, Tor is a great place for criminal activity, even communication for terrorists. Just as clearly, it’s an attempt by well-meaning people to restore freedom and privacy to their online activities. MacNaughton clearly falls in the latter category.

“If you use Tor, the NSA will look at you harder,” he says. “But it’s harder for them to see what you’re doing.”