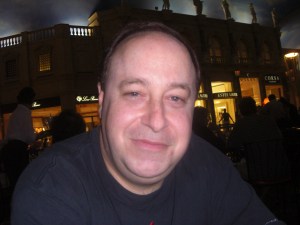 “War Games” was the seminal geek hacker movie that inspired many a young cyber sleuth when it debuted in 1983. The movie told the story of how a kid found a back door into a military computer and accidentally set off a nuclear confrontation and launched the careers of actors Ally Sheedy and Mathew Broderick. Twenty five years later, the movie is still credited for creating the public’s impression of the life of hackers. David Scott Lewis, the one-time hacker who was the model for Broderick’s David Lightman character, spoke about the movie on stage on Saturday at the Defcon conference. I first met Lewis in 1994 when one of his friends described him as a “walking encyclopedia.” Now 50, he’s a clean-tech executive living in China and just starting writing the Zero Day Defense blog. I caught up with him again in front of the faux Trevi fountain at Caesar’s Palace in Las Vegas under a cheerful but fake blue sky.

VB: Tell me about your early years and how you became a techie.
DSL: It started, like a lot of people in the 50 and over crowd, with ham radio. That’s what I did in junior high. I enjoyed my electronics class. I got a ham radio license. Built my own telescope. In 1975, when Popular Electronics had the first kit PC on its cover, I got very excited. That was 12th grade for me. Popular Science and the Andromeda Strain had a big impact on me. So did Future Shock. They influenced me to go into hacking, even though most of what they said was wrong. 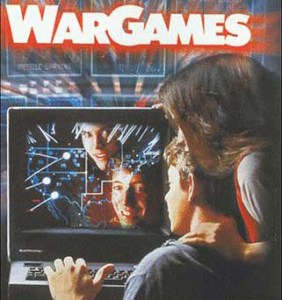 VB: What got you into computers, going online, and into the world of hacking?
DSL: Hacking was a natural migration. It was lone hackers back then. It was a side thing, a hobby. Just like phone phreaking. That was very different, about doing cute tricks. I was more into hacking. Unlike in the movie, where David Lightman doesn’t know so much about the Defense Department and was much more into video games, I was into the military. I was in the United States Strategic Institute in high school. I went to Armed Forces Communications and Electronics Association and Association of Old Crows meetings. That was the electronic warfare society. The command for the Blue Cube, which was broken into in War Games, was at the place where I went for meetings.

VB:What were some real-life events that led to the movie and to your participation in it?
DSL: “War dialing,” where you used the computer to randomly dial numbers in search of a computer to hack, was pretty common. That was more of a trick to start the hack. We didn’t call it that back then. But the term comes from the movie. It was about finding things you could break into. The Department of Defense had strong defenses. So you had to find back doors to get into DoD computers. But the front doors were pretty wide open in other organizations. It was easy to get in if you found a modem.

VB: You helped with the screen play?
DSL: I got together with the screenwriters Larry Lasker and Walter Parkes in the beginning of 1979. We had dinner. Talked about the plot.

VB: How did they know about you in the first place?
DSL: That was coincidental. They knew someone at the William Morris Agency who was a friend of mine. We were all in Los Angeles. They needed a hacker. They had an idea about doing a Stephen Hawking character with a protégé in the story. That wasn’t reflected in the movie at all or even the original screenplay. But what did come out was a screenplay that had space-based weapons systems.

VB: How much of the events were pretend and how much real?
DSL: Like Hollywood does to things, when they made it into a movie, they made it cute. They added the speech synthesis of the war computer. Nobody used this. Nobody needed it. I would still argue that, even to this day, War Games had the most accurate representation of real hacking than any other hacker movie. It didn’t have all of this ridiculous 3-D virtual reality and other nonsense. In the real world, hackers used command prompts that had no visualization tools. As we look back on the talk about space-based weapons, it looks silly now. That got changed to breaking into Norad and taking control of the system.

VB: So you’re a model for David Lightman. I guess you never did break into a military system?
DSL: Unfortunately, that’s one thing that can’t be discussed. (Laughs). That will remain an unknown. There were hacks into various places I shouldn’t have been. But it’s because I had a better knowledge of what the DoD systems were like. It was easier for me than it would have been for other people. 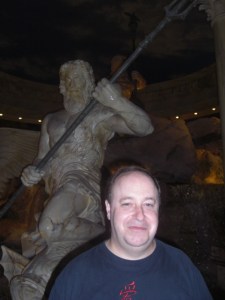 VB: I’m sure the statute of limitations are over now.
DSL: That is the most that I can say about that. Hacking techniques defeated the auditing trails and knowing enough about DoD to know where to go was a big help. It’s like spear phishing today. It’s targeted phishing. This was spear hacking. Knowing the target well and the vulnerabilities was key. Also, certain permissions were granted to find out if certain places could be penetrated.

VB: So the work you did to inspire the story was never really revealed?
DSL: They made it into a Hollywood movie. John Badham was the director. He likes to do sensationalized movies. You could take components of War Games and a lot of that had been done.

VB: People didn’t connect the dots that you were the model?
DSL: That wasn’t discussed and there were reasons for that. The hacker culture grew from War Games. At that time in 1983, it was just a fun movie. The culture evolved from that. I myself had moved on. As the hacker culture developed, I was in robotics. Once a hacker, always a hacker. But my real job was in robotics.

VB: Can you tell us what you’ve done since then?
DSL: Robotics was the most high-tech thing I did. Then I sold my soul to the bigger corporations. I was in web design in the mid-1990s. I was Samsung’s director of strategic planning for the U.S. I worked at Microsoft and Oracle. At Oracle, I was director of e-business. I was a vice president at the Meta Group, which got swallowed by the Gartner Group.

VB: Your youthful indiscretions set you on the right road into your career?
DSL: Yes. This [clean tech] is an area that will stay hot for a long time. By contrast, when I worked in e-business, it became a four-letter word when the bubble burst. Security always remained pretty good as an industry when the rest of the sectors collapsed.

VB: What are you doing now?
DSL: I went to China five years ago. It was a whacky thing to do. I wound up as vice president of business development for two of the IT outsourcing firms here. I wound up with Tsinghua University, which is like the MIT of China. I worked with them on their outsourcing. A friend pulled me into a solar business.

VB: We’re at the 25th anniversary of the movie. What observations do you have about security technology and information warfare?
DSL: On information security, we now recognize the power of organized crime in this arena. It’s about getting data on people. Intelligence agencies, both domestic and foreign, are involved. We know China has done some penetration into the West and visa versa. Information warfare is a key component of the People’s Liberation Army strategy. We know those games are being played. That’s a big change over the years. Signature-based detection systems suck. They are not very effective and so you’ll see more artificial intelligence in defense solutions. I used that term broadly. I’ve been a skeptic of AI for a long time. But it will be applicable in information security for the foreseeable future. New companies will come on line in that area and the landscape will be different five years from now.