Andreessen’s not new to the social networking scene either. He previously helped found build-your-own-social-network company Ning.

RockMelt’s engineering team is reportedly from Opsware (a software company Andreessen sold to HP for $1.6 billion in 2007) and also has Robert John Churchill, the principal engineer for Netscape Navigator, onboard. Andreessen didn’t immediately return a request for comment.

Andreessen raised $300 million with long-time business partner Ben Horowitz to create a venture capital fund in June. They’ve said they’ll invest with small amounts on the belief that startups should get by with less than $500,000 over their lifetime, according to an interview with VentureBeat.

Investing in browsers might be a difficult move, however, as they’ve historically needed big company life-support to survive. Flock, an enhanced version of the open-source Firefox browser that streams status updates from Twitter and Facebook, has had a hard time gaining traction, and even Andreessen’s own Netscape got drubbed by Microsoft even though it was early to market and had the engineering talent.

Why does the world need a Facebook browser? A cynical and sarcastic answer would be “because Facebook is the internet and the internet is Facebook.” It’s a little harder to be too cynical, though, when you look at the team of people who appear to be working on the project. These are people who have done a lot for the open web. Hopefully RockMelt will be a game changer in the same spirit, but we’ll keep you posted as we learn more. It might seem outlandish, but desktop software dedicated to serving Facebook and perhaps integration of other sites with Facebook, could go over very well with millions of people. We’ll have to wait and see what RockMelt has planned.

RockMelt could be a way to browse the web with Facebook ever-present, as well, instead of being a client for Facebook. We just don’t know yet. This may be part of but could instead be contrary to the growing storm of support building for a distributed framework for social networking. 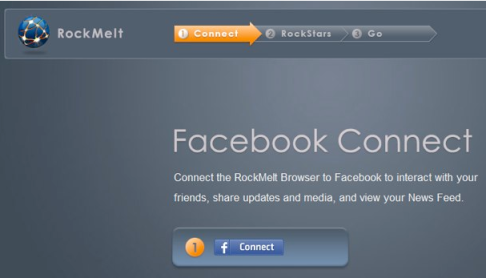