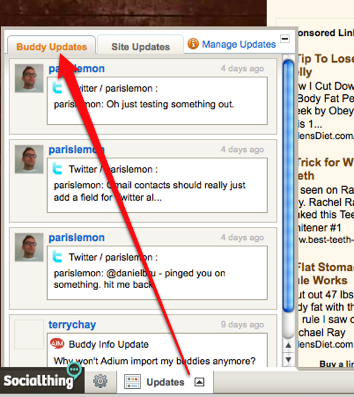 A few months ago I started hearing rumors about some sort of web-wide chat and social networking product that AOL was working on. It promised to tie together AOL’s popular instant messaging service AIM and Bebo, the social network that the conglomerate bought for $850 million a year ago — and restore AOL’s former reputation as an innovative web company. Today, the product has been partially revealed in live testing on AOL country music site theBoot. Along the lines of what I’d been hearing, it’s a sort of toolbar at the bottom of the site’s page, that lets you chat with friends, see what they’re up around the web, and share what you’re doing with them. And aside from the product’s awful name — “Socialthing for Websites” — it’s surprisingly well-executed.

Most people outside of the startup world probably haven’t heard of Socialthing — it’s a service that lets you aggregate your activities from around the web in one stream, similar to FriendFeed. In the new toolbar, it appears on the far left: Click on it and you’ll see a window showing friends’ activity on other sites (your friends are apparently people who you’re already friends with on AIM, ICQ or Bebo). There’s also a tab in this window that shows you comments and other user activity from the site you’re currently on. On the inner part of the right side site of the toolbar, there’s a button that you can click on to chat with other people who are on the same web page. On the outer part of the right hand side, there’s a button that you can click on to see your existing friends on AOL. Click on one of their names and a new chat window will open up in the middle of the toolbar so you can start chatting with them without leaving the site. 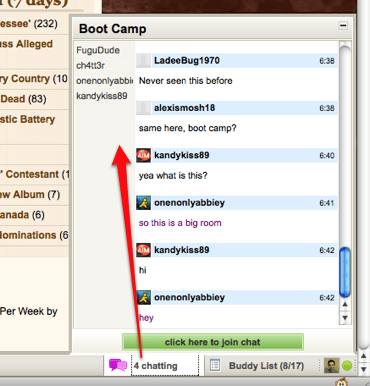 Perhaps most importantly, when you take an action on the site, AOL takes this information and distributes it to all of your AIM friends in the form of an info button next to your AIM screenname. They can open it and follow a link to see your comment. (However, at this point, you only see this information within the chat list in the toolbar — and not across AOL). Conceptually, the feature looks like AOL’s way of tying social interactions together across the web in roughly the same way that Facebook’s Connect and MySpace’s MySpaceID offer ways for you to share information from other web sites to friends on those social networks. The chat toolbar interface that AIM is trying out, however, is perhaps most analogous to Meebo’s CommunityIM chat toolbar, which lets other web sites integrate its chat aggregation service.

The toolbar will likely be rolled out across AOL properties as well and likely other web sites. And that’s not all. TechCrunch’s Erick Schonfeld got an early look at it, and heard about plans that AOL has for making the service more meaningful to people:

Another twist that AOL is planning on adding soon is a way to filter all of these streams of information by prioritizing which public streams you see based on who you chat with the most in private. Since AOL knows your chat history, it can move to the top the public comments, Tweets, and links to Flickr, YouTube and whatnot that come from your closest contacts—the ones you actually speak to (assuming you use AIM).

I also wouldn’t be suprised to eventually see tight integration with Bebo, which itself has been radically redesigned after its purchase from being fairly plain-vanilla social network to being more of a feed-driven lifestreaming service. It’s possible, for example, that AOL will integrate your actions on the toolbar and on toolbar-enabled sites into Bebo’s stream. For now, though, additional details about the service’s product roadmap are scant and this seems to be more of a test.