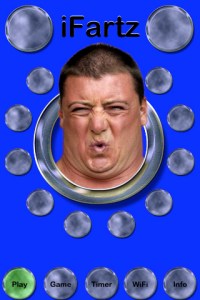 A new power is rising in Apple’s App Store. You might think it’s all the great games that have been coming out recently for the iPhone platform — but you’d be wrong. There’s a trend that’s rising much more quickly: Fart applications.

It’s astonishing to me that there are even 14 different names that developers can come up with, but there they are. The store was graced yesterday by apps with names like Fart Button, Mr. Poot!, iToot, iFart, iFartz, FartBox, Who Farted? Fart Keyboard — oh and don’t forget WhoopieCushion and Whoopee Cushion (huge difference).

I’m thinking back to the early days of the App Store this past summer when some people were complaining that it was quickly getting filled with meaningless joke apps. What on Earth must they be saying now? Ever since Apple loosened its rules on crude apps, they have been flooding the store at what I can only imagine is a greater rate than booze flowed after Prohibition was repealed.

So people must actually be buying these like crazy, right? Well, I only see two so far on either of the paid or free top 100 apps lists, Pull My Finger (the first one) and iFart Mobile, the two with the most press coverage so far. But they were also two of the first, so perhaps the others are quickly rising.

Clearly, I’m not sure anyone can live without using Fart Keyboard on a daily basis.