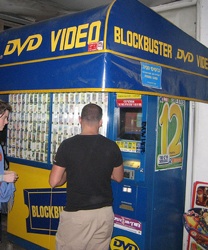 While nearly everyone and their mother is getting in to the digital movie distribution business, one name still notably absent is Blockbuster. Despite being nearly synonymous with movie rentals for the past twenty years, and buying the digital download service Movielink last year, Blockbuster still has not been able to get its act together in the digital world.

Today, at its annual shareholder meeting, the company showed off yet another direction it is attempting to take on the road to digital: kiosks.

I find this interesting and somewhat humorous. After all, to use a kiosks you have to be, you know, at a kiosk. Considering you are probably not going to have one of these in your home, doesn’t this negate one of the major advantages of digital distribution: instant access?

These machines, which should begin to roll out to select Blockbuster stores in the next three weeks are being developed by NCR Corp, according to the Associated Press. For the pilot tests, the kiosks will only work with the Archos portable media player, however the company says compatibility with a wide range of devices will eventually follow. No word on if that includes a certain device that begins with a lower-case “i”, but seeing as those only sync with iTunes, I wouldn’t count on it.

Considering how many people watch digital movies on portable devices and then subtracting all those who do so on iPods, you have to wonder why exactly Blockbuster is wasting its time on such an endeavor. Blockbuster undoubtedly thinks this will be a big trend in the future, but if such activity does catch on, it’ll probably be on advanced cell phones like the iPhone, probably not stand alone devices like the Archos. Eventually, this activity will take place wirelessly over the Internet as well. I just don’t get it.

Perhaps Blockbuster is stalling. All of its main rivals have major digital distribution options now while it does not. While digital movie distribution is not a huge business yet, it will be, and the longer Blockbuster waits to get into it, the less likely it is to be a leader in the field. 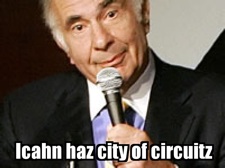 It’s also noteworthy that during the meeting the company barely mentioned its proposed takeover of electronics chain Circuit City — another less than stellar idea in my book. Absent from the meeting was Blockbuster’s largest shareholder, Carl Icahn. Icahn has said he will simply buy Circuit City if Blockbuster can’t for whatever reason. You may recall that Icahn is also taking hostile actions to take over Yahoo.

No word on if he’ll buy either Circuit City or Yahoo from a kiosk.